Barry Blitt’s “The Shining”: The New Yorker cover for the June 3, 2019, issue, by Barry Blitt, portrays three men who have been enormously helpful to President Trump: Lindsey Graham, William Barr, and Mitch McConnell. “Assembling an image with the President’s enablers presented a problem: Who to include, who to leave out?” Blitt said. “I barely had enough room for the President himself. In any case, I expect there will be other opportunities to draw Devin Nunes, Matt Gaetz, Jim Jordan, Sean Hannity, etc., etc., etc.”

Just a suggestion, these lickspittle lackeys ought to be shining Trump’s shoes with their tongues.

New Yorker artist Barry Blitt has captured U.S. Sen. Lindsey Graham in his natural habitat, shining the shoes of President Donald Trump, for the cover of the magazine’s June 3 issue.

“The Shining,” as the watercolor work is titled, shows Graham along with Attorney General William Barr and Senate Majority Leader Mitch McConnell shining the presidents shoes.

The three uniformed men are depicted reaching out to shine the president’s two feet while Trump appears to be engaged in whatever else is happening across an ornately appointed room.

In a description of the cover story, readers are asked to check in “for analysis of how the President’s men burnished his reputation.”

Graham has carried water for President Trump for some time now, insisting it’s good for him because as someone who wants the best for the president, Trump keeps him in his orbit.

Asked about the cover during a visit to the [Three Dolts on The Divan]  Fox & Friends AM talkshow bench this morning, Graham didn’t seem too enthused, but felt compelled to defend himself.”

But here’s the deal: If I’m helping the president, it’s good for me because I want him to succeed,” according to a tweet posted by P&C‘s Jamie Lovegrove.

“If it’s Sunday, it’s sycophants for Trump.” Kudos to Chris Wallace for having the integrity to demonstrate what a complete fraud lickspittle lackey Lindsey Graham is. FoxO News’ Chris Wallace Challenges Lindsey Graham On His 1998 Claim That Ignoring Subpoenas Is Impeachable: 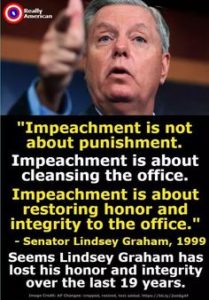 Fox News host Chris Wallace on Sunday forced Senator Lindsey Graham to watch a 1998 clip of himself talking about the dangers of ignoring subpoenas from Congress during an era when he was leading the impeachment effort against former President Bill Clinton.

During Graham’s appearance on Fox News Sunday earlier today, Wallace challenged the Republican senator on his past comments about impeachment, which appears to contradict his current stance on calls by Democrats to impeach President Donald Trump.

“You call all of what’s going on in Washington a political circus, but you took a different view back when you were leading the impeachment effort against Clinton back in the late ’90s. At that time, you said that any president, and you talked specifically about Clinton and Richard Nixon, who defied Congress when it came to subpoenas was in danger of impeachment,” Wallace said, before airing an old clip of Graham’s comments made in Capitol Hill.

“You’re becoming the judge and jury. It is not your job to tell us what we need. It is your job to comply with the things we need to provide oversight over you,” Graham can be seen saying in the December 18, 1998 clip. At the time, he was a member of the House of Representatives and one of the managers — de facto prosecutors — in Clinton’s impeachment trial before the Senate.

“Question: Why is it an impeachable offense for Clinton or Nixon back then to ignore congressional subpoenas but it’s okay for President Trump to do now?” the host asked Graham.

“Well, there’s two things here,” Graham explained. “[Special Counsel Robert] Mueller’s investigation was a special counsel appointed to find out if the president committed a crime; if he colluded with the Russians; if he obstructed justice. The president gave 1.4 million documents to Muller. Everybody around the president was allowed to testify [WRONG: Donald Trump and his idiot son Donny, Jr. did not testify, among others]. He never claimed executive privilege [He is now!]. He complied, no cover-up, worked with Mueller [He tried to fire Mueller, twice! It’s part of the ten instances of obstruction of justice documented by Mueller]. Mueller’s the final word on this for me.”

Actually, A.G. William “Coverup” Barr’s purposefully misleading four-page summary was the “final word” for Lindsey “Stonewall” Graham. Lindsey Graham admits he didn’t even read the entire Mueller report. This pathetic loser is as big a liar as the president he defends.

“If Clinton had stiffed Ken Starr, that’s different,” the Republican senator continued. “What [Democratic House Judiciary Chairman Jerrold] Nadler is doing is trying to destroy the president and his family. If I were the president, I would fight back against this political revenge coming out of the House.”

Says the man who impeached Bill Clinton for lying about an extramarital affair, something millions of Americans have done. Not many Americans, however, have colluded with the Russians to steal an election and then proceed to undermine every democratic institution in turning America into a lawless authoritarian kleptocracy, like Russia. If you want to throw around the word “treason,” this is where it actually applies. And Lindsey “Stonewall” Graham is an accomplice who is aiding and abetting it.

It is their constitutional duty, something Republicans have completely abdicated, and an act of patriotism to defend the Constitution.

Graham’s comments came amid a tense battle between House Democrats and the Trump administration over the former’s subpoenas for more information on Mueller’s Russia report.

Attorney General William Barr provided Congress with his summary of Mueller’s report on March 24, two days after the special counsel finalized his findings. In the four-page document, Barr said Mueller neither exonerated nor indicted Trump with regard to whether he obstructed justice, but the attorney general indicated he saw no grounds to pursue criminal proceedings against the president.

However, when Mueller’s 448-page redacted report was released roughly a month later, it painted a hazier picture for Trump with regard to obstruction. While Mueller’s team did not directly accuse the president of a crime, it revealed ample evidence of wrongdoing by the president and his inner circle, dating from his 2016 presidential campaign to current day.

It was a “road map” for Congress to pursue, because of the deeply flawed DOJ policy of not indicting a sitting president. Mueller is an institutionalist who followed the rules.

“If we had confidence after a thorough investigation of the facts that the president clearly did not commit obstruction of justice, we would so state,” the special counsel’s report read. “Based on the facts and the applicable legal standards, however, we are unable to reach that judgment.”

Mueller gave Congress a “road map” to ten instances of obstruction of justice that Congress should investigate. Trump has since daily added additional instances of obstruction of justice, i.e., the refusal to comply with the lawful subpoenas of Congress, and weaponizing the Justice Department with his new Roy Cohn and “fixer” William Barr, to pursue his “enemies list” of federal law enforcement and political opponents for “treason.”

Mueller also limited his investigation to Russian influence, and appears not to have examined the influence of other state actors including Saudi Arabia, United Arab Emirates and Israel. Mueller also appears not to have investigated Trump’s financial entanglements with foreign interests which could give them leverage over Trump and policy decisions, which has clearly happened with Trump wanting to lift sanctions on Russia and Russian oligarchs in defiance of Congress.

And then there is his defiance of Congress in selling arms to Saudi Arabia and attempting to provoke a war with Iran, something Saudi Arabia and Israel advocate. These are all areas of investigation for Congress — Mueller did not have the final word.

South Carolina historically has given the nation some of the worst senators in our history. Lindsey “Stonewall” is certainly one of them, keeping that state’s sorry legacy alive. He has to go.