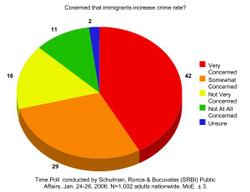 There is a widespread perception that undocumented immigrants increase crime, as demostrated by the poll at the right. This is a significant factor in many people’s feeling that the social order is under threat by undocumented immigration, and is thus a major problem for any Democrat working to advance the cause of reasonable immigration reform.

The idea that undocumented immigrants contribute to crime disproportionately is simply not correct. There is a major disconnect between sound social science and the prevailing Conventional Wisdom reflected in public opinion.

Recent studies by no less an authority than Robert J. Sampson, the chair of the Harvard School of Sociology, and arguably the premier criminologist in the world, reveal that undocumented immigrants were the cause of the decline in crime rates, expecially violent crime, through the 1990s. Sampson recently published an essay in the New York Times summarizing his research on crime in immigrant communities entitled, Open Doors Don’t Invite Criminals.

Sampson found that, far from causing crime, the cultural norms within closely networked immigrant neighborhoods, and the excellent work ethic of first generation immigrants, regardless of their origin, produced much lower levels of criminal behavior.

Don’t let the CW of immigrants=crime go unchallenged. Immigrant bashers and racists who play upon the stereotypes of Latino gangs and ethic organized crime syndicates to stigmatize hard-working and law-abiding immigrants should must be countered with facts and sound social science. Immigrants who commit serious, especially violent, crimes should be deported, but being an immigrant, even an undocumented one, does not make one a criminal.