I have said before and I cannot emphasize enough that the Party of Trump is a criminal enterprise led by a third-rate mafia “Don” Trump. They are all accomplices, co-conspirators and accessories who are aiding and abetting his criminality and corruption. There is not a patriot among them. They put fealty to their “Dear Leader” above all else, including loyalty to their country and our national security, and their oaths of office to defend the Constitution.

Donald Trump has normalized lawlessness and corruption in the Party of Trump.

The House Intelligence Committee has started the release of deposition transcripts of State Department and intelligence officials taken over the past several weeks. Keep in mind that Republicans serving on the investigating congressional committees had the opportunity to be present and to ask questions during these hearings, and Republican counsel for the committees also had the opportunity to ask questions.

For all their whining about “transparency,” Republicans had the opportunity to participate in the depositions and know full well to what the witnesses testified. They no doubt violated the secrecy of these depositions to prevent witnesses from coordinating their testimony by reporting what was said back to the White House and Trump’s attorneys.

But mafia “Don” Trump has demanded that Republicans release their own version of transcripts of interviews in the House’s ongoing impeachment inquiry. In other words, just make shit up, put words into the mouths of witnesses — as the White House allegedly did with the readout of Trump’s call with Ukrainian President Zelenski — in order to create an alternate reality, and to poison the congressional inquiry with doubt about its credibility among his sycophant MAGA cult followers.

The president’s anxiety led him to publish a tweet on Saturday arguing that House Intelligence Committee Chairman Adam Schiff (D-Calif.) “will change the transcripts” from the impeachment proceedings ahead of their release. Trump kept this going a day later, suggesting Schiff shouldn’t be “allowed” to release transcripts, in part because the Californian “will change the words” and “manipulate” the materials.

Reminder: Trump is a classic example of psychological projection. Whatever he accuses his political opponents of, you should take as an admission of his own misconduct. He actually admits to what he is doing by accusing others of doing it.

Trump added that he considers Schiff a “freak” – a word he hasn’t previously tweeted since taking office.

It was at this point that the president recommended that his fellow Republicans distribute “their own transcripts.”

In case this isn’t painfully obvious, if the White House were confident that the transcripts from the impeachment inquiry would exonerate Trump and derail the impeachment proceedings, Trump wouldn’t be panicking like this.

It’s unlikely that anyone in the West Wing has reviewed the deposition transcripts, but dozens of House Republicans have participated in the behind-closed-doors process – claims to the contrary notwithstanding – and they’ve had an opportunity to let the president know how the evidence hasunfolded.

And given the weekend’s presidential tweets, Trump has apparently been told to expect some discouraging news.

There’s also a degree of irony hanging overhead: for weeks, the White House and its GOP allies have condemned the private nature of the impeachment inquiry and demanded more transparency. But now that transcripts are poised to be released, Trump appears to be scrambling to undermine public confidence in the [transcripts] – which Republicans claimed to be eager for us to see.

During the assorted depositions, some House Democrats told reporters that Republicans were actually lucky that the discussions were unfolding in private. In light of Trump’s stress-tweeting, the president is starting to realize those Dems were right.

Postscript: In case anyone is tempted to take Trump’s concerns about “manipulated” transcripts seriously, George Conway explained that the conspiracy theory the president is raising isn’t really possible. 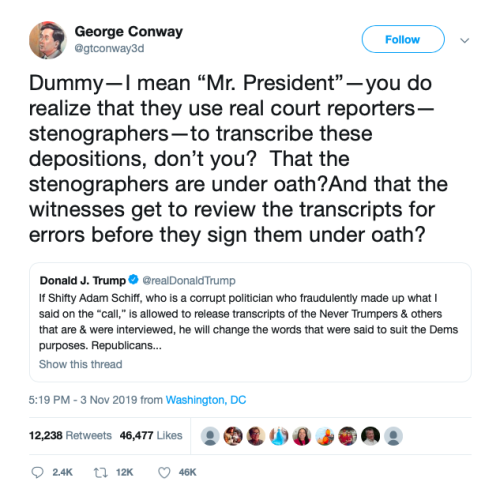 President Trump is now openly calling on his Republican allies to produce doctored transcripts of witness testimony that will exonerate him.

Trump did not put it quite that directly, of course. But given all the known facts — and given everything we’ve seen from Trump over the past few years — there is simply no other way to read them.

It’s hard to imagine that even Trump’s GOP allies would attempt something so spectacularly absurd, and if they did, it’s even harder to imagine it would be successful.

But this episode nonetheless provides an occasion to deconstruct one of the most insidious lines of propaganda coming from Trump’s Republican loyalists right now — and, more broadly, to look at how this kind of bad-faith deception is supposed to function.

[Trump gave] a straight-up command to Republicans that they produce transcripts that vindicate him. What would that look like? We know the answer to this because Republicans have already told it to us.

What Republicans are saying about transcripts

For weeks, numerous Republicans have claimed that the publicly confirmed and very damning revelations about Trump’s corruption aren’t actually damning, because behind closed doors, the witnesses’ stories have fallen apart.

Republicans tried this trick to discredit Ambassador William B. Taylor Jr.’s devastating testimony. Taylor portrayed a situation in which Trump used hundreds of millions of dollars in taxpayer-funded military aid to extort Ukraine into launching sham “investigations” designed to absolve Russia of sabotaging the 2016 election and to smear potential opponent Joe Biden before 2020.

After that, Rep. Lee Zeldin (R-N.Y.), a slavish Trump lickspittle, called for the release of the transcript of Taylor’s testimony, claiming: “Much of his leaked opening statement collapsed, but Schiff keeps the public in the dark on that!”

Zeldin then broadened his case. “The public is absolutely being misled about every single deposition that takes place,” Zeldin told the Washington Examiner.

This would have to include Lt. Col. Alexander Vindman, who testified he was deeply alarmed by Trump’s pressure on Ukraine to smear Biden, and White House adviser Tim Morrison, who confirmed that the quid pro quo involving the military aid did take place.

Another Republican, Rep. Chris Stewart of Utah, claimed it’s “extraordinarily frustrating” that he cannot yet share the closed-door details supposedly showing that witness testimony has been debunked.

This line has also been pushed by Rep. Michael Turner (R-Ohio). Here’s how the New York Times reported on that:

Mr. Schiff has an “absolute maniacal focus on Donald Trump” said one committee Republican, Representative Michael Turner of Ohio, who accused Mr. Schiff of routinely lying to the press and the public about what happened in private interviews, and conducting the inquiry’s initial hearings out of public view so he and other Democrats could distort the findings.

Let’s point out how ridiculous this whole line really is. First, much of the “leaked” testimony actually consisted of complete opening statements documented in black-letter text.

For all these witnesses, we have their testimony in their own words, not selectively leaked, but rendered as fully as they wished to render it. So we’re supposed to believe that under withering cross-examination from Republicans, these witnesses’ accounts were unmasked as unreliable or baselessly sourced.

This is verifiably absurd. Taylor texted his concerns contemporaneously. His allegation of a quid pro quo was confirmed by Morrison, who got it firsthandfrom Ambassador Gordon Sondland, a ringleader of Trump’s scheme. Vindman’s recounting of the call is confirmed by the White House’s own summary.

Yes, we know about some revelations from Vindman — such as the assertion that a White House lawyer stashed the call on a top-secret server right after Vindman raised alarms — from leaks, not his opening statement. But the White House itself has acknowledged that the call was buried in precisely that manner.

The bottom line is that the most damning revelations have for the most part already been confirmed in a manner that renders it logically impossible to see how cross-examination might debunk them. Republicans are all but certainly lying when they say the transcripts will show that the case against Trump has been sliced apart by their lacerating Clarence Darrow-like questioning.

But more to the point, we will soon very likely know this to be the case. The transcripts are [being] released.

That’s why Trump is now claiming Schiff doctored the transcripts, and calling on Republicans to release the “real” ones. But this, too, is monumentally ridiculous on its face. Many witnesses will testify in the open hearings phase. If Schiff doctored transcripts, they could simply say so publicly.

Indeed, we are going to hear all these revelations directly from them. If GOP cross-examination is really capable of reducing them to puddles of incoherence, Republicans will be able to show us so.

Scott Weinberg is Gone, But the Threat of Purple For Parents Remains