This morning, “Mafia Don” Trump was once again engaging in his favorite crime, extortion, this time threatening to withhold federal aid to Michigan and Nevada simply because those states are mailing absentee ballot applications to all registered voters as a reasonable precaution in response to the coronavirus pandemic.

Michigan was already hit hard by the coronavirus crisis, and now it’s dealing with another round of devastating conditions. Brutal flooding in the state has breached two dams, forcing thousands of Michigan residents to evacuate in what the National Weather Service has described as a “life-threatening situation.”

It was against this backdrop that Donald Trump thought it’d be a good idea to publish a tweet this morning, threatening to cut off Michigan’s federal funding.

“Breaking: Michigan sends absentee ballots to 7.7 million people ahead of Primaries and the General Election. This was done illegally and without authorization by a rogue Secretary of State. I will ask to hold up funding to Michigan if they want to go down this Voter Fraud path!”

How much madness did Trump pack into a tweet consisting of only 48 words? Let’s pause to run through the Top 10 Reasons The President’s Tweet Was Completely Bonkers.

9. Trump likes to pretend “illegal” is simply a word used to describe things he doesn’t like, but making applications for absentee ballots available during a pandemic is both legal and common.

7. Trump has a weird habit of threatening American states during times of crisis. Note, for example, that the Republican also threatened to cut off federal funding for California during a recent wildfire crisis.

6. Michigan is a key 2020 battleground state. Threatening to cut off its federal support in the midst of two ongoing crises probably isn’t a politically smart move.

5. Trump scrambling to fight against efforts to make it easier for Americans to vote reflects a degree of panic and cowardice.

4. Soon after threatening Michigan, the president made the same threat against Nevada, another swing state that’s done nothing wrong.

3. Trump doesn’t have the authority to block federal funding in order to make it harder for Americans to vote.

2.According to some legal experts, withholding federal funding over unrelated policy disagreements is itself a federal crime. (My edit:) 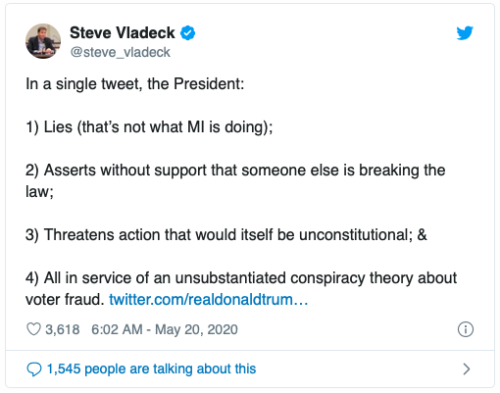 Vladeck continued lampooning the irony of Trump’s statement, writing that “withholding federal funds over (unrelated policy disagreements is itself “illegal[] and without authorization.” 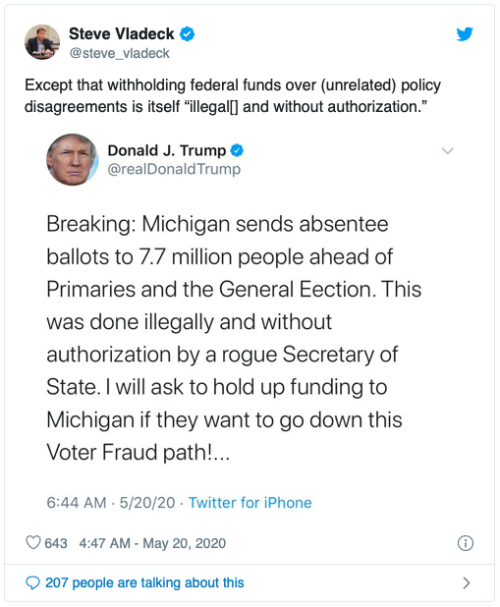 He cited to former Director of the Office of Government Ethics Walter Shaub, who said that if Trump were to follow through on his threat it would likely constitute a crime under federal law, 18 U.S. Code § 59s: 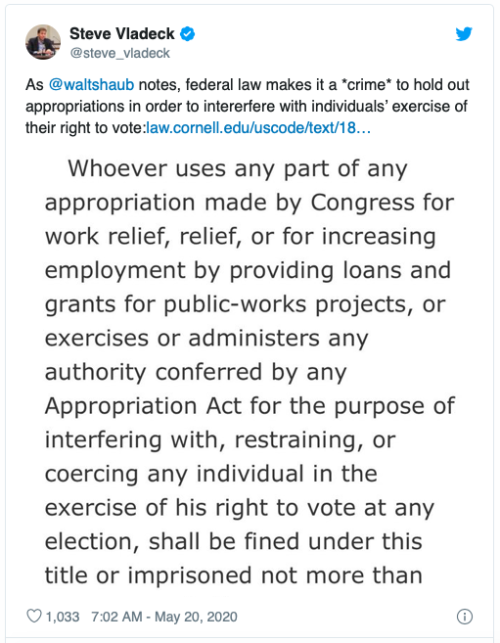 Daniel Goldman, the former federal prosecutor who was the House Democrats’ counsel in the impeachment of President Trump, posted a video of law professor Pamela Karlan’s expert testimony before Congress. Karlan cited presidential extortion of states as an impeachable abuse of power.

Just a friendly reminder that the President’s attempted extortion of states was anticipated.

In fact, it was a hypothetical designed to show how absurd that would be.

Postscript: If Trump had privately threatened Michigan, telling it to limit ballot access or risk federal aid, and the quid pro quo leaked, it’d be on the front page of the major dailies. This president, however, put the same threat on Twitter for all the world to see.

This should be today’s top “Trump true crime story.” (There are others).

Election law expert Rick Hasen has already written an op-ed for the Washington Post. Trump’s bogus attacks on mail-in voting could hurt his supporters, too:

On Wednesday morning, President Trump threatened to withhold aid from Michigan and Nevada because of purportedly illegal activity related to absentee ballots. In reality, the states are doing nothing illegal — they are trying to ensure voters can exercise their right to vote without jeopardizing their health during a pandemic.

Even putting aside the likely unconstitutionality of the president conditioning aid to states upon acceding to his political demands, Trump’s unsupported claims are exceedingly troubling because they seek to cast doubt on the legitimacy and fairness of the upcoming elections without reason. Trump may not realize it, but they are also politically counterproductive for him: Rural Republican voters, even in blue states, may be the ones most hurt in November by attacks on mail-in balloting.

Let’s start with the facts. On Michigan, Trump wrote: “Breaking: Michigan sends absentee ballots to 7.7 million people ahead of Primaries and the General Election. This was done illegally and without authorization by a rogue Secretary of State. I will ask to hold up funding to Michigan if they want to go down this Voter Fraud path!.” On Nevada, he wrote: “State of Nevada ‘thinks’ that they can send out illegal vote by mail ballots, creating a great Voter Fraud scenario for the State and the U.S. They can’t! If they do, ‘I think’ I can hold up funds to the State. Sorry, but you must not cheat in elections.”

In Nevada, the state has shifted to all-mail balloting for a primary next month in light of the pandemic. As the state explained to a federal court when this decision was challenged by the right-wing group, True the Vote, the change aimed “to maintain a high level of access to the ballot, while protecting the safety of voters and poll workers — who belong to groups who are at high risks for severe illness from COVID-19.” In Paher v. Cegavske, challengers claimed that Nevada’s decision to conduct an all-mail primary in response to the pandemic “disenfranchised” them because their votes would be diluted by fraudulent votes cast by mail. The court concluded that plaintiffs’ claim of voter fraud was “without any factual basis.”

When have facts ever deterred Republicans from making frivolous false claims of voter fraud? “Don’t bother me with the facts, I know what I believe!”

As I have explained, absentee ballot fraud is very rare — there were 491 prosecutions related to absentee ballots in all elections nationwide between 2000 and 2012, out of literally billions of ballots cast. When someone tries an absentee ballot scheme — as appears to be happening now in Paterson, N.J. — it is hard to hide, and the folks tend to get caught.

So why is Trump tweeting out baseless fraud claims and making threats he probably cannot follow up on to withhold aid from states that help voters exercise their constitutional rights? I cannot get into the president’s head to know whether he actually believes there is something illegal or fraudulent going on in these states. (Trump voted by mail in Florida’s primary this year and in New York in 2018, so he must not think all absentee ballots are phony.) What I do know is these claims serve to undermine his supporters’ confidence in the fairness and integrity of the election process.

By claiming Democrats cheat, he is laying the groundwork for instability and a potential political crisis in November should he lose. Democracy depends upon the losers of an election accepting the election results as legitimate and agreeing to regroup to fight to regain political power in the next election. If large numbers of voters believe the winning side cheated in elections, we could have unrest and resistance to lawful government orders.

I am particularly worried about states like Michigan, which for the first time will see a tsunami of absentee ballots in November. These states do not have long histories of counting absentee ballots, which takes much more time than counting in-person ballots (because absentee ballot envelopes need to be checked and processed before ballots can be counted). It will be the big Democratic cities like Detroit that will take the longest for ballots to be counted. It is entirely conceivable Trump could be ahead in the ballot count on election night based on votes cast in person, only to see his lead disappear and Democrat Joe Biden declared the state’s winner days later.* What if Trump claims victory on election night and claims without evidence that the later-counted ballots are infected with massive fraud? As I explain in my book “Election Meltdown,” he made just such an unsubstantiated claim about a disputed U.S. Senate race in Florida [and Arizona] in 2018. He could use the period during delayed counting to rile up his supporters.

* We saw this exact scenario play out in Arizona in the 2018 midterm election, with the exception that the Republican candidates in the closely contested races knew that there were still thousands of ballots to be counted and did not rush to declare victory before the final tally of the vote, which Democrats won. Nevertheless, the chair of the Arizona Republican Party and Donald Trump alleged voter fraud, Despite rampant claims, there is no evidence of voter fraud in Arizona, “offering no proof of their claims, other than pointing to the slow vote-counting process — which is still ongoing.” The “audit” conducted by the Arizona Republican Party later conceded that it did not identify any illegalities.

The president’s dangerous tweets stand to undermine our democracy. In a recent report, a committee of election experts that I chaired issued 14 recommendations to ensure that we have a fair election during the pandemic and that the vast majority of voters will accept the results of the election as legitimate. Among the key recommendations are that states should reduce delays in the counting of absentee ballots and that the media should help inform the public that because of increased absentee voting, “delays in election reporting are to be expected, not evidence of fraud, and that the 2020 presidential election may be ‘too early to call’ until days after Election Day.”

But, ironically, Trump’s claims about voter fraud also increase the chances that he is going to lose in November. We know rural Republican voters had a harder time voting by mail in Wisconsin when it held its recent primary under pandemic conditions. As political scientist Michael McDonald pointed out, rural counties are going to have the hardest time dealing with an absentee ballot surge because these areas are more likely to lack adequate resources and training. Why would Trump voters jump through extra hoops to vote by mail if they believe, as the president is telling them, that the system is rife with fraud? The voters Trump is hurting is his own.

Trump is throwing fuel on the fire and undermining the November election. It is up to the rest of us to keep dousing his flames with the truth.