Back in July, I posted that Martha McSally gets her first primary challenger, meet Ann Griffin.

Businessman Daniel McCarthy announced his intention to run against Martha McSally in the Republican primary for the U.S. Senate in 2020 during an interview with ABC15 today.

It has been rumored for several months that the cosmetic company executive and Glendale resident would challenge the senator, who was appointed to the position by Governor Doug Ducey in December of last year to fill the seat vacated after the passing of Senator John McCain.

McCarthy comes into the race against McSally with considerable personal resources as the co-founder of The Original Makeup Eraser company and is capable of putting tens of millions into the race according to a source close to the campaign. (But see below). 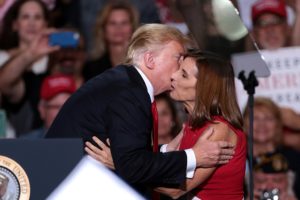 “Senator McSally has been a champion for Arizona – working to secure the border and lower taxes for hard-working families. She’s received President Trump’s endorsement because she’s most conservative candidate on the ballot and we look forward to her winning next fall.”

You can watch Daniel McCarthy’s interview with Steve Irvin tonight at 6 p.m. on ABC 15 (Phoenix).

Good luck with that!

McCarthy, of Glendale, has been teasing a run for months and has questioned her conservative credentials and loyalty to President Donald Trump, who has already endorsed McSally.

The cosmetic company executive is a newcomer to politics and confirmed his intention to jump into the race to The Arizona Republic. The news was first reported by ABC 15.

“I’m running because there is a demand for authenticity and integrity for that senate seat,” he said. “Corruption in our government is to the point to where conservative outsiders like myself must step up and do their best to help fix the situation.”

McCarthy would not say how much money he intends to spend on the race, but said the ABC 15 report suggesting he was capable of spending “tens of millions” of dollars on a campaign was inaccurate.

McCarthy casts himself as conservative more aligned with the conservative base in today’s Republican Party than McSally. In interviews and Facebook posts, he has supported the repeal of the Affordable Care Act, the 2017 Republican tax law, and Trump’s signature border wall plan.

So a sycophant cult follower of the personality cult of Donald Trump, someone who can make even Martha McSally look like a sane candidate in this primary? Is he a McSally plant? 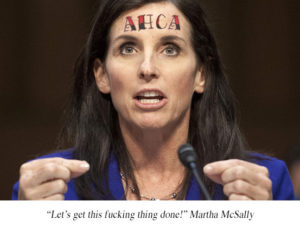 McSally has a history of supporting all of those policies, in one form or another.

Excuuuse me? That’s some serious historical revision by The Republic. McSally tried to lead the effort to kill the Affordable Care Act. Remember this moment in infamy?

In recent weeks, McCarthy has attacked McSally over her comments that she is “open” to to act on warnings of violent tendencies or activities by people who may have access to guns.

“He can spend some bucks and he can make some damaging attacks, and all in all that’s bad news for her,” Sabato said. “He may drive her to the right while the Arizona electorate is clearly moderating” to a more purple status.

During a 20-minute call with supporters earlier this month, McCarthy railed against the “corruption” ailing national politics, McSally’s “rigid” support of Trump – wait, what? That’s your shtick, Dude! – and efforts by top officials in the Republican party to try to convince him not to run.

He has dubbed McSally the “unelected” senator from Arizona (sorry, but I believe Blog for Arizona was first) and appeared angered and offended by the opposition research that allies of McSally were gathering to use about him should he mount a campaign.

Does this guy not understand how the game of politics is played? Oppo research is the lifeblood of campaigns.

So in other words, “Dear NRA, please endorse my candidacy and send money.”

The National Republican Senatorial Committee, the arm of the national party that helps elect Senate candidates, reaffirmed its support of McSally.

“Senator McSally has been a champion for Arizona — working to secure the border and lower taxes for hard-working families,” spokeswoman Joanna Rodriguez said in a written statement. “She’s received President Trump’s endorsement because she’s most conservative candidate on the ballot and we look forward to her winning next fall.”

McSally and her team had been hoping to avoid a primary challenge, which could prevent her from consolidating Republican support while forcing her further to the right, which could hurt her with the broader electorate in the general election.

A primary opponent could allow Democrat Mark Kelly, a retired astronaut who has no competitive rival, to start branding himself early as a centrist Democrat. That strategy worked last year for Sinema.

It is unclear how much McCarthy intends to spend on the race, but his efforts could force McSally to spend at least some off her campaign resources.

She is already lagging her apparent Democratic opponent, Kelly, who has raised $8.4 million compared to her $5.5 million through June.

A spokesman for the state Democratic Party said in a statement that no matter who wins the GOP nomination, the candidate will “emerge damaged and shown to be out of touch with Arizona voters who want an independent Senator who works for them.”