Martha McSally Hiding In Her Bunker, Fails To Concede To Mark Kelly

Martha McSally Hiding In Her Bunker, Fails To Concede To Mark Kelly 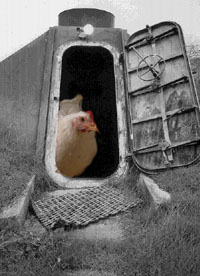 Everyone knew that Martha McSally, Arizona’s appointed, not elected senator, was going to lose this senate race even before election day. Even Martha McSally knew it. So it is not like she did not have time to come to terms with her loss and to prepare for the inevitable.

But more than a week after election day, and the race having been called for Democrat Mark Kelly, McSally is hiding in her chicken bunker (it’s back one last encore!) and has yet to put on her big girl pants and call Mark Kelly to make a gracious concession.

Time to call the moving van and pack up your stuff, Martha, and get the hell out of Arizona. I hope I never have to see or hear your name again after this year. Ten years of your antics is more than enough.

The general election was over a week ago. And now, after tens of thousands of ballots have been counted across Arizona, Senator Martha McSally still trails her Democratic challenger Mark Kelly by almost 80,000 votes. The most recent tally of uncounted votes statewide reported by election officials is around 45,000, making it impossible for her to close the gap.

But McSally has yet to concede the race. In fact, she’s gone completely radio silent.

Fox News called the race for Kelly on election night, and the Associated Press followed suit at 1:00 a.m. on November 4. Other major networks called it for Kelly days later. McSally’s last public statements, at least on social media, were a few tweets from her campaign Twitter account urging voters to make it to the polls and stay in line to vote on Election Day.

Jacob Peters, a spokesperson for Kelly, told New Times that the Senator-elect has yet to receive a concession call from McSally; he declined to comment on the incumbent’s bizarre lack of acknowledgement of Kelly’s victory.

Caroline Anderegg, a spokesperson for McSally’s reelection campaign, did not respond to New Times requests for comment.

Kelly, meanwhile, has assumed the role of Senator-elect. He’s been assigned temporary office space in Washington, D.C. and has named a transition team. And because Kelly won a race that is technically a special election — McSally was appointed to the seat two years ago by Governor Doug Ducey — Kelly could be sworn in as soon as November 30. Arizona Senator Krysten Sinema, a Democrat who beat McSally in the 2018 election, publicly welcomed Kelly to the Senate and thanked McSally for “her service.”

McSally’s silence seems to mimic the denial of the election results in the presidential race coming from President Donald Trump, Senate Republicans, and the broader Republican party — including elected officials and party leaders in Arizona. (Reports have emerged that the Republican posturing is geared toward motivating the GOP base to help win the two runoff Senate elections in Georgia in January.)

This makes no sense here in Arizona, because our appointed senator will no longer be a senator after November 30, when Mark Kelly can be sworn in. No one cares what a two-time loser in two years has to say about the Georgia senate races. You know how Donald Trump feels about losers … oh, wait.

By the way, Arizona Governor Doug Ducey also has not issued any public statement congratulating Mark Kelly on his win. Time to put your big boy pants on also, governor, and congratulate Arizona’s junior senator – even though you plan to run against him two years from now in 2022.