Despite the fact that the U.S. GDP declined 1 percent in the first quarter (due to an unusually harsh winter), and US consumer spending was down 0.1 percent in April, typically warning signs of a faltering economy, Neil Irwin at the Washington Post argues Maybe the U.S. economic recovery isn’t that disappointing, after all, and Dr. Patricia Buckley offers her economic analysis for the United States: Spring thaw should give way to a summer surge.

The May jobs report out today indicates steady job growth despite the aforementioned “spring thaw” in the economy. Steve Benen breaks down the monthly jobs report in Job creation remains steady, 217k jobs added in May :

The new report from Bureau of Labor Statistics shows the U.S. economy added 217,000 jobs in May, which is almost exactly what economists expected. The overall unemployment rate, meanwhile, remained at 6.3% — still at its lowest point since September 2008, nearly six years ago. 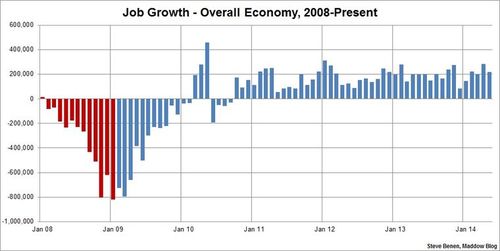 For the fourth consecutive month, public-sector layoffs did not drag down the overall employment figures. Though jobs reports over the last few years have shown monthly government job losses [due to GOP austerity measures], in May, the private sector added 216,000 while the public sector added 1,000. The latter is obviously tiny, but after several years in which that total was negative, it’s at least somewhat heartening.

As for the revisions, March’s totals remained the same, while April’s figures were revised down slightly, from 288,000 to 282,000.

Overall, this is a report that suggests the jobs landscape is … holding steady. At least after one read-through, there’s nothing that stands out as either great or horrible. The economy continues to plod along steadily.

All told, over the last 12 months, the U.S. economy has added over 2.38 million jobs overall and 2.36 million in the private sector. What’s more, May was the 51st consecutive month in which we’ve seen private-sector job growth. The year isn’t quite half over, but 2014 is currently on track to be the best year for U.S. job creation since 1999. 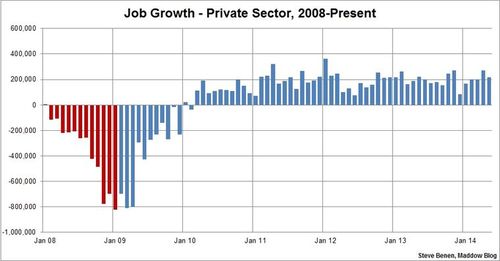 The Bush Great Recession caused the deepest and longest unemployment “trough”in the United States in the post-war era. GOP obstruction of economic stimulus measures, and counter-productive demands for economic austerity measures, including the GOP budget sequester, have prolonged the economic recovery. 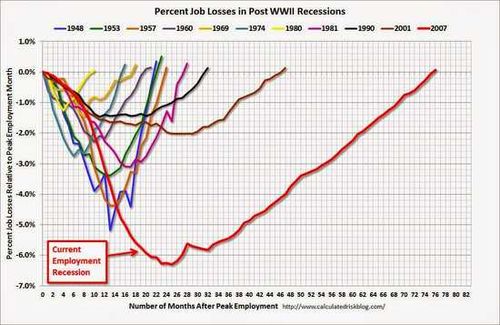 Despite finally breaking out of the unemployment “trough” of the Bush Great Recession, there is still a long way to go. The Aughts were a lost decade for U.S. economy, workers, failing to add enough jobs to keep pace with new workers entering the work force, followed by massive job losses. We are now almost halfway into the next decade, only getting back to where we were at the start of the Bush Great Recession. This is a huge hole from which to dig out.

Typically the figure economists cite as the minimum number of additional jobs needed to keep the unemployment rate flat is about 150,000 to 200,000. “But economists at Barclays Capital, who have been analyzing how the graying of America may affect employment trends, estimate that going forward 75,000 to 100,000 jobs added per month may be sufficient.” How Many Jobs Should We Be Adding Each Month?

The prolonged unemployment “trough” of the Bush Great Recession has left a large pool of long-term unemployed, discouraged workers who have given up, underemployed and part-time employed seeking full time work. This is the “U-6” measure of employment. It is nearly double the unemployment rate reported today. This is the reason why people feel economic insecurity and a general sense of malaise with the economy. It has been a long time since the decade of economic expansion in the 1990s.

Here is the U-6 chart, currently showing a 12.2% unemployment rate: 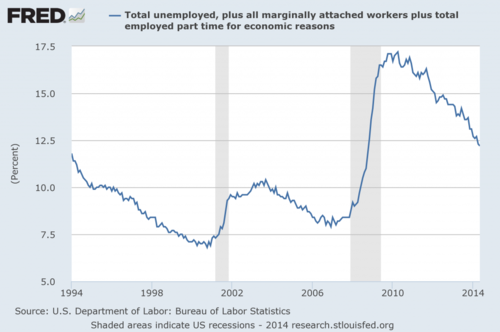