For the first time in more than a decade, the House of Representatives held a hearing on legislation to enact a single-payer model of health care in the United States. Joan McCarter at Daily Kos reports, First Medicare for All hearing in the House confirms ‘Health care is a right for all’:

[The hearing was on] Rep. Pramila Jayapal’s Medicare for All bill. Opening the hearing, House Rules Committee Chairman Rep. Jim McGovern declared the theme driving the hearing, and driving the Democrats’ 2020 election priorities: “Health care is a right for all, not a privilege for the lucky few.”

The center of the hearing, the heart of it, was testimony from 35-year-old Ady Barkan, an advocate and activist who is dying of ALS. He used an electronic voice to describe his experience fighting the system just to stay alive. You can read Barkan’s opening statement here and watch it below.

“The ugly truth is this: Health care is not treated as a human right in the United States of America,” he told the committee. “On the day we are born and on the day we die, and on so many days in between, all of us need medical care. And yet in this country, the wealthiest in the history of human civilization, we do not have an effective or fair or rational system for delivering that care.” His own out-of-pocket medical costs, not covered by insurance, are $9,000 a month, paid for through GoFundMe campaigns and assistance from friends and family, which, as he said, “is a terrible substitute for smart Congressional action.”

Note: Here is another video clip link to Ady Barkan’s exchange with Rep. Debbie Lesko (R-AZ). Lesko” “This isn’t going to pass because you didn’t ask for input from Republicans” … “something this big needs to be bipartisan.”

Tell me Debbie, just how did that work out with the Affordable Care Act which was based on conservative think tank models for “RomneyCare” in Massachusetts — and every Republican voted against it, simply because “Obama.” If Americans have to wait on Republicans to actually do something about health care, we will all die waiting on you. Americans are done waiting on you. 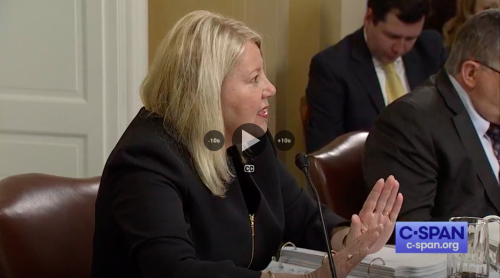 Universal health care as a right was not the unanimous theme of the day, with Republicans arguing that the bill is “radical,” as Rep. Tom Cole of Oklahoma said, and that it would force people to give up the private health insurance they love. Because, boy, does everybody love dealing with their health insurance company. This is clearly Republicans attempting to set up yet another “gotcha” akin to the “You can keep your doctor” brouhaha of the Obama administration.

But on the whole, the hearing was remarkably civil, remarkably informative. Barkan’s presence was probably largely why. Even Republicans couldn’t look him in the eye, listen to his digital voice, and hear his story and not be affected. This was the first hearing, however, and likely to be the only one Barkan will be able to attend, because getting to Washington from his home California was a massive ordeal. The next hearing will be in the Ways and Means Committee, its Chairman Richard Neal has pledged, though it has not been scheduled yet.

On Wednesday, the Congressional Budget Office (CBO) published a much-awaited paper about the possible design of a single-payer or “Medicare for all” system in the United States. Margot Sanger-Katz of the New York Times reports, ‘Medicare for All’ Gets Much-Awaited Report. Both Sides Can Claim Victory.

The budget office most often provides detailed estimates about the cost of legislation. But anyone looking for many numbers in Wednesday’s long report would be disappointed.

Instead, the nonpartisan office noted the many ways that legislators could devise such a system, outlining the cost and policy effects of a wide range of difficult choices. It also noted that such a system would be so different from the country’s current situation that any hard estimates would be difficult, even with all the specifics laid out.

As such, the report has convenient snippets likely to be deployed by both single-payer devotees and detractors. Within minutes of its release, congressional news releases began pouring out, noting how the report had confirmed this or that position.

A change to single-payer, which a substantial number of Democratic presidential candidates and members of Congress have called for, would amount to the largest domestic policy change in decades. It would have broad implications not only for health care and the federal budget, but also for the broader economy.

“The magnitude of such responses is difficult to predict because the existing evidence is based on previous changes that were much smaller in scale,” the paper said.

Democrats in Congress have been writing bills that would bring the country closer to a single-payer system. And on Tuesday a House committee held the first hearing in more than a decade on the merits of a single-payer approach. Bills sponsored by Bernie Sanders, the independent senator from Vermont, and Pramila Jayapal, a House Democrat from Washington, would create a so-called Medicare for all. In that system, Americans would be covered by the same government insurer for a wide range of medical benefits, without the need to make any payments to doctors or hospitals when they receive health care.

Democrats have also introduced other bills recently, including two this week, proposing more modest changes in how health care is delivered. One, called the Choose Medicare Act, would allow more Americans to opt into the existing Medicare system. Another, called Medicare for America, would automatically enroll more Americans in the government system, and give others a choice between government and private insurance.

The single-payer proposals have broad — though not majority — support among Democratic lawmakers so far, meaning they are unlikely to become law in the immediate future. That’s in part why John Yarmuth, the chairman of the House Budget Committee, who supports single-payer health care, asked for a report of this type. Medicare for all is likely to have a high price, and many Democrats would prefer to postpone contending with the politics of such a number until there is a plausible path forward.

But as the C.B.O. report highlighted, the expansive approach Mr. Sanders and Ms. Jayapal have embraced is not the only way to devise a single-payer system. Congress could opt to provide all Americans with coverage more similar to what people 65 and older currently receive under Medicare, with more limited benefits and a requirement that they pay some deductibles and co-payments. A single-payer system could preserve some role for private insurance, either to cover certain benefits or to pay for private care outside the standard system. Such decisions could have a big effect on the overall cost.

When it came to particulars of those costs, however, the budget office said little. “Government spending on health care would increase substantially,” the paper noted at one point. But it never said by how much. The amount matters because it will influence how much tax revenue will be needed to pay for the program. Supporters of a single-payer plan note that, even though government spending would increase, there could be substantial reductions in the other ways individuals and employers pay for health care now through premiums, out-of-pocket spending and state taxes.

The budget office may still provide firm estimates for a proposal if one gets closer to a floor vote in the House or the Senate. The office is charged with developing estimates for legislation, and it produces them even when doing so involves a fair bit of speculation. In past years, for example, the budget office was asked to provide cost estimates for a federal terrorism reinsurance program, which required it to gauge the likelihood of terrorist attacks and the possible expense of their damages.

The cost of a single-payer system is not as unpredictable as that of terrorism insurance, but the report’s many caveats and questions highlight how the effects of Medicare for all will depend on a multitude of legislative decisions — and then a larger set of management decisions by the government that runs the system.

The many questions and nuances are all reminders that single-payer is more complicated than the campaign talking points on either side might suggest. It might not cause rationing. It might not create seamless care.

For now, legislators can take their pick of a set of third-party estimates of the cost of the Sanders plan. They range widely, underlining the budget office’s point that precision will be a challenge.

As Lau Tzu said, “The journey of a thousand miles begins with one step.” Tuesday’s House hearing was only the first step on a long journey.