Most reporters have been using the pool report from the Washington Post, so let’s use this as a starting point (some paragraphs have been reordered for continuity):

When Vice President Pence visited a migrant detention center here Friday, he saw nearly 400 men crammed behind caged fences with not enough room for them all to lie down on the concrete ground. There were no mats or pillows for those who found the space to rest. A stench from body odor hung stale in the air.

When reporters toured the facility before Pence, the men screamed that they’d been held there 40 days, some longer. They said they were hungry and wanted to brush their teeth. It was sweltering hot, but the only water was outside the fences and they needed to ask permission from the Border Patrol agents to drink.

Pence appeared to scrunch his nose when entering the facility, stayed for a moment and left. [In a video of the visit, it appeared that Pence did not speak with any of the migrant men, only talking with a Border Patrol officer briefly, before walking away. Video from the Texas Tribune.]

A few minutes earlier, from a bird’s eye room called “The Bubble,” he’d seen 382 men packed into cells, peering against the windows to get a view of him. Some appeared shirtless.

The vice president toured two migrant holding facilities Friday with Republican senators in an effort to defend the administration’s handling of the migrant crisis following reports of inhumane conditions at the facilities.

The first center he visited — in Donna, Tex. — while not homey or comfortable, was only two months old, cleaner and allowed Pence to paint a rosier picture of the treatment of migrants held in federal custody. He used the facility to decry Democrats for comparing such areas to “concentration camps.”

Pence first toured the cavernous facility built in May to handle overcrowding, where 800 people are living. Most were lying on kindergarten-style napping mats on the floor, covered with thin, tinfoil blankets. In another room, children, all under 8 years old, were seated in front of a television watching an animated Spanish film.

Pence asked the children if they had food and were being taken care of. They all nodded, and some said “sí.” A few children shook their heads no when asked if they had a place to “get cleaned up.”

“Every family I spoke to said they were being well cared for, and that’s different than some of the harsh rhetoric we hear from Capitol Hill,” Pence said. [You can judge for yourself from the raw video.] “Customs and Border Protection is doing its level best to provide compassionate care in a manner the American people would expect.”

At the second facility in McAllen, he instead described the conditions as the result of the migrant border crisis the administration has been warning about for months but demurred twice when asked if he was okay with the facility’s conditions.

“I was not surprised by what I saw,” Pence said later at a news conference. “I knew we’d see a system that was overwhelmed.”

He added: “This is tough stuff.”

The vice president’s office said it specifically instructed the Border Patrol agents not to clean up or sanitize the facility beyond what is routine so the American people could see the overcrowding and scarce resources, like lack of beds, and see how serious the crisis is at the border.

“That’s the overcrowding President Trump has been talking about. That’s the overwhelming of the system that some in Congress have said was a manufactured crisis,” Pence said during a news conference after visiting the second facility. “But now I think the American people can see this crisis is real.”

But Trump and Pence are the ones ensuring the system is overwhelmed by detaining asylum-seekers en masse, as Rep. Don Beyer (D-VA) said on Twitter:

“[Democrats] are working to expose and stop human rights violations at the border, but everyone needs to know that Pence and Trump are making these problems much worse on purpose. They separate families and detain asylum seekers in huge numbers for political reasons. They could stop it.”

And during a House Oversight and Reform Committee hearing on Friday, Rep. Alexandria Ocasio-Cortez (D-NY) testified about her visit to a detention center and excoriated the administration for creating the crisis: “This is a manufactured crisis because the cruelty is manufactured. This is a manufactured crisis because there is no need for us to do this. There’s no need for us to overcrowd and to detain and under-resource,” she said, adding, “It is a policy of dehumanization implemented by this executive administration laid at the feet of Stephen Miller that creates a tinderbox of violence and dehumanization where hurt people hurt people.”

In an emotional speech at the same hearing, Rep. Gerry Connolly (D-VA) said: “You can talk all you want about whether the poor Border [Patrol] is overwhelmed that makes no excuse for how we are treating children…Is there no limit to what you will justify in this administration?”

Connelly and Ocasio-Cortez are right. Trump and Pence have made a significant departure from Obama Administration policy regarding the detention of migrants, keeping migrants detained beyond legal limits and systematically separating families. It’s a crisis of their own making and their proposed solution is to build more facilities instead of changing the policies that are keeping people detained in inhumane conditions.

Border officials sought to counter some of the men’s claims at the second facility Pence visited.

Michael Banks, the patrol agent in charge of the McAllen facility, said the men there are allowed to brush their teeth once a day and are given deodorant after showering. But he conceded that many of the men had not showered for 10 or 20 days because the facility previously didn’t have showers.

There were no cots for them to sleep on because there wasn’t room, Banks said. Instead, they are each given a Mylar blanket. He said they are also given three hot meals a day, along with juice and crackers.

Pence’s comments are at odds with recent statements from Republicans, as well as Trump, who have accused Democrats who have visited similar facilities of exaggerating the poor conditions. Trump earlier Friday called recent media reports and comments from Democrats about poor conditions “phony.”

So Pence went off-script, again? (He has a habit of doing this).

And earlier this month, the president downplayed concerns about how migrants are being treated at the facilities.

“Many of these illegals aliens are living far better now than where they came from, and in far safer conditions,” Trump wrote in a July 3 tweet.

Pence said the rough conditions are why the administration recently requested and Congress approved $4.6 billion in aid for the border, and he accused Democrats of not supporting more funding for additional beds at facilities for migrants.

He also defended the job being done by the employees at the detention centers.

“I was deeply moved to see the care that our Customs and Border Protection personnel are providing,” Pence said. “Coming here, to this station, where single adults are held, I’ve equally been inspired by the efforts of Customs and Protection doing a tough job in a difficult environment.”

Just so you’re clear on the subtext of what Pence is actually saying for consumption on Trump TV, the real victims here are the Border Patrol and ICE agents who have to deal with the stinking subhuman vermin who are bringing filth and disease to the United States. Does this sound vaguely familiar to you from history?

The Jewish Group Never Again Action is Taking on ICE — and the ‘Concentration Camp’ Taboo:

Some of the protesters last month outside the Elizabeth, New Jersey Immigration and Customs Enforcement detention center spoke into megaphones. Others used an older call to action, blowing shofars, musical horns used in Jewish ceremonies for millennia. They carried banners with the words “never again means never again.”

This protest was the first in a series by Never Again Action, a newly formed coalition of Jews opposed to ICE and its treatment of immigrants. By the end of the evening, 36 activists were arrested. The group isn’t just challenging ICE; it’s entering a fierce debate within the Jewish community about when, if ever, to compare a situation to the Holocaust. While some Jews, and even the U.S. Holocaust Memorial Museum, object to comparisons between the Holocaust and the Trump administration’s treatment of migrants, other Jews are taking up the post-Holocaust cry of “never again” to protest migrant detentions and deaths.

And they’re willing to go to jail over it. Since the Elizabeth protest, Never Again Action and its allies, including immigrant rights organizations, have held demonstrations in D.C., Philadelphia, Chicago, New York City, Boston, San Francisco, and South Bay, California, resulting in more than 120 activist arrests.

Stephanie Guedalia, a Jewish activist arrested in Elizabeth said the debate over the term “never again” was secondary to the real issues she and others protest.

“Fuck the semantics. Children are dying. That should be enough,” she said. “My goal is not to convince you to use those semantics. It’s to get you to stop these atrocities.”

Sophie Ellman-Golan, Never Again Action spokesperson, said the group isn’t waiting for conditions to match those of the Holocaust to take action.

“We look at what is happening and what our government is doing to immigrant communities,” Ellman-Golan told The Daily Beast. “We see nothing less than a mass atrocity. While conditions might not exactly mirror the Holocaust, we shouldn’t wait for them to mirror the Holocaust to take action. That’s why we say ‘never again’ means never again for everyone, and never again means now.”

Protesters at Never Again demonstrations have called attention to filthy and overcrowded conditions in U.S. detention facilities, and to the seven reported deaths of detained children in recent months. These activists, as well as politicians like Rep. Alexandria Ocasio-Cortez (D-NY), have referred to the U.S. camps as “concentration camps,” a term associated with but not exclusive to Nazi Germany.

But many on the right, and even some prominent Jewish institutions, have rejected comparisons between U.S. treatment of immigrants and Nazi treatment of Jews.

Guedalia said she understands why the debate, particularly around the slogan “never again” is so loaded in the Jewish community.

So what about all those good Christians watching the caging of children and abuse of asylum seekers? Vice President Mike Pence’s defense of his administration’s detention camps was criticized so heavily on Saturday that the hashtag #FakeChristian trended nationwide on Twitter. Mike Pence labeled a ‘fake Christian’ for defending inhumane conditions at Trump’s concentration camps:

Pence was subjected to an overwhelming stench of urine during his visit to a Customs and Border Patrol facility in McAllen, Texas.

The public relations trip appeared to have backfired on the VP.

Here is a small sample of what people are posting at #FakeChristian on Twitter: 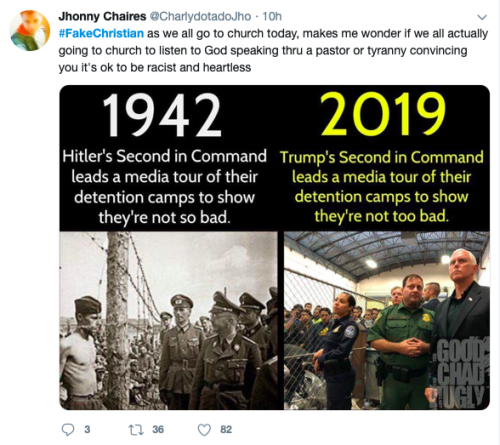 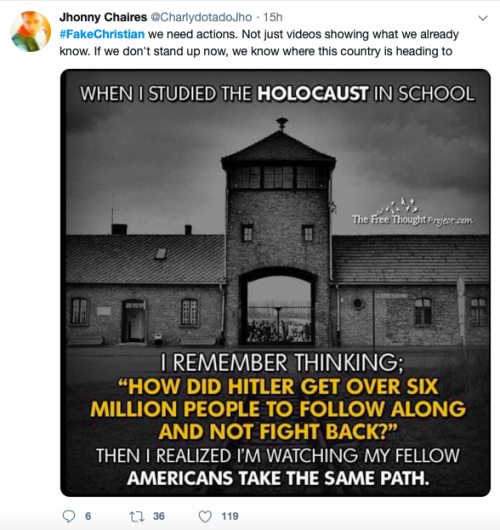 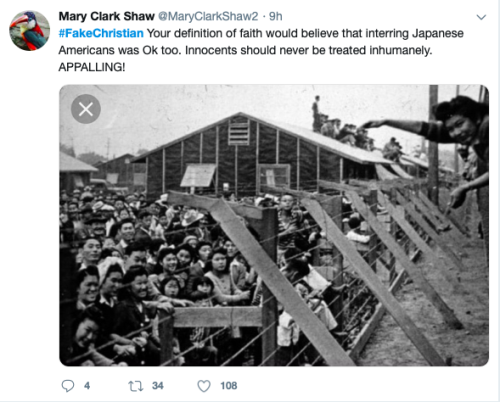 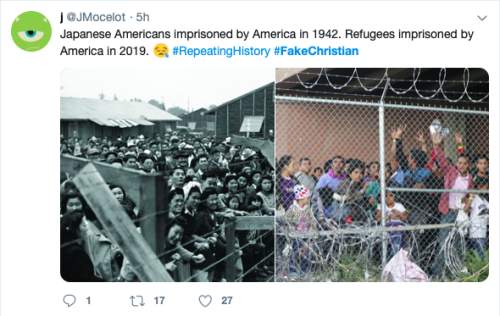 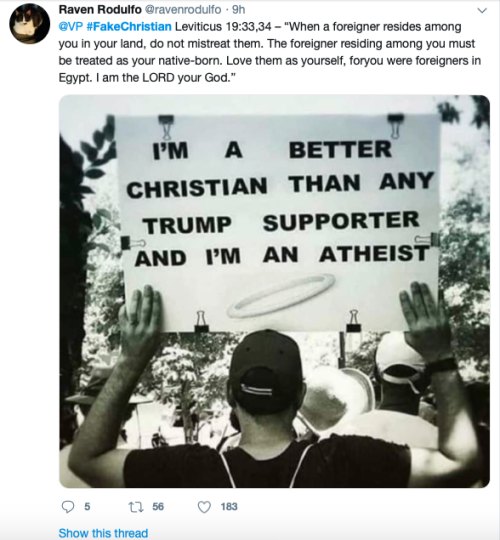 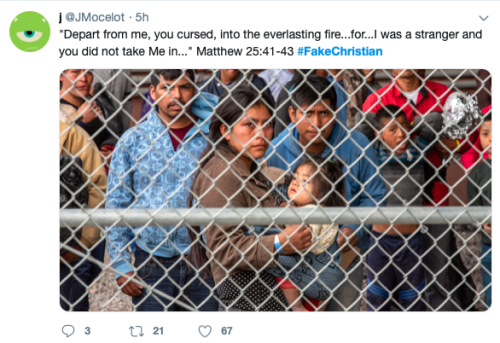 There’s a lot more where this came from! Check it out.

What are these School Board Members thinking? It is not safe...