Photo: The sun set over the Twin Cities as smoke hovers over St. Paul along University Avenue Thursday.

My hometown is burning.

The anger of protestors outraged over the murder by white Minneapolis police officers of yet another unarmed, handcuffed and restrained black man, George Floyd, who pleaded with the officer kneeling on his neck “I can’t breath!“, has boiled over into a third night of protests in Minneapolis-St. Paul, the “Twin Cities.” The officers involved have been fired, but have not yet been arrested, which is what the protestors are righteously demanding.

The Minneapolis Police Department, with its long history of accusations of abuse, finds itself under siege again after a video captured a black man suffocating beneath the knee of a white officer, with three other officers failing to intervene.

Medaria Arradondo, the chief, swiftly fired all four men on Tuesday and called for an F.B.I. investigation once the video showed that the official police account of the arrest of the man, George Floyd, bore little resemblance to what actually occurred.

But quelling the community rage has been a challenge. 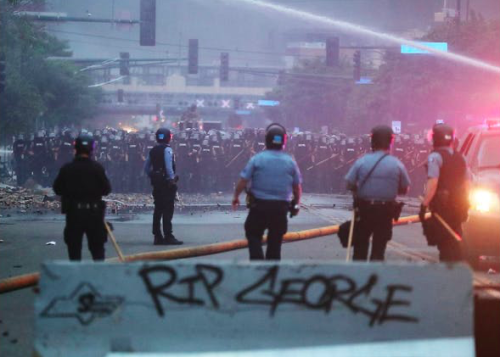 African-Americans account for about 20 percent of the city’s population, but they are more likely to be pulled over, arrested and have force used against them than white residents, Police Department data shows. And black people accounted for more than 60 percent of the victims in Minneapolis police shootings from late 2009 through May 2019, data shows.

The tension between the community and the 800-plus-officer force has unfolded in a predominantly white and progressive metropolis, where the white mayor openly discusses systemic racism, the police chief is a black man who embraces a community-oriented approach and residents elected two black transgender people to a City Council that has taken aggressive action to curb racial segregation.

Yet there is a deep rift between the city’s police force — which also is predominantly white — and the community, one that seems to grow larger with each killing.

That anger boiled over again on Thursday night. The St. Paul Pioneer Press reports (paywall), More than 170 St. Paul businesses looted or damaged, dozens of fires set, police say. In Minneapolis, the Star-Tribune reports the police station where the officers worked was set on fire.

You just knew it was only a matter of time until the white nationalist racist-in-chief in the White House would see this as an opportunity to fire up his racist base and divide the country over these police abuse protests, which have now spread nationwide.

Late Thursday and early Friday, rioters invaded and set fire to Minneapolis police’s Third Precinct headquarters and for a second overnight, torched and looted many other buildings in the Lake Street corridor, many of them housing small businesses with minority owners.

About 1:30 a.m. Friday, Mayor Jacob Frey, who previously had held news conferences to denounce Floyd’s death and call for the arrest of the officers involved, held one to address the chaos of the past three days.

“Earlier this evening, after receiving real-time information from [Police Chief Medaria] Arradondo and after having numerous phone calls with him involving the situation at the Third Precinct, it became clear that there were imminent threats to both officers and the public,” Frey said. “I made the decision to evacuate the Third Precinct. The symbolism of a building cannot outweigh the importance of life, of our officers or the public. Brick and mortar is not as important as life.”

Frey said it became clear by Wednesday that Minneapolis police needed help, and that help came from the State Patrol and the National Guard callup. He reiterated his support for calls made by Arradondo and the Minneapolis Fire Department on responses to the violence and fires.

Frey repeated his passionate calls for help from the community: “We need to make sure that people are looking out for our city right now.”

The unrest got the attention of President Donald Trump, who tweeted he “can’t stand back & watch this happen to a great American City, Minneapolis.”

Trump added that he had talked to Minnesota Gov. Tim Walz “and told him that the military is with him all the way. Any difficulty and we will assume control but, when the looting starts, the shooting starts.” Asked about Trump’s tweets, which also criticized him, Frey said, “Weakness is refusing to take responsibility for your own actions. Weakness is pointing your fingers at somebody else at a time of crisis. Donald Trump knows nothing about the strength of Minneapolis.”

It must be noted that police treated these white nationalist thugs with the utmost restraint, and respected their First Amendment rights of free speech and to petition government, even as they sought to overturn democracy.

It begs the question, if these protestors had been black, would police have shown the same restraint? Would Fox News have scared white people with images of the New Black Panthers? Sure, you know they would. 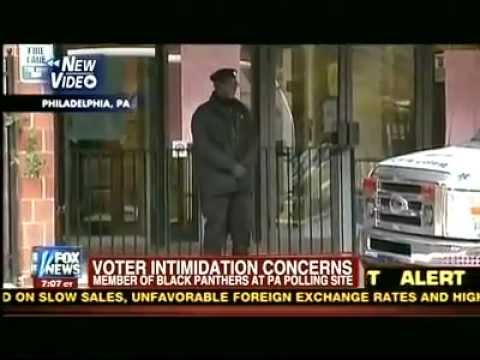 Unarmed black (and white) protestors in the Twin Cities demanding justice for George Floyd were met with tear gas, flash-bang grenades and rubber bullets from police. The racial disparity in how these protestors are treated cannot be ignored.

To be clear, as Mayor Frey pleaded, there is no justifiable excuse to engage in looting and setting fire to businesses that are not the target of your anger. These are businesses that providing essential services to your community. Rioters and looters are only hurting their own community further by doing this, especially as Minnesota reported a single-day record of 35 deaths on Thursday from COVID-19, raising the death toll to 967. Protests could trigger virus surge in Minnesota as deaths hit new high.

You just know that Donald Trump is going to fan the flames of racial tensions and divisions. He no doubt sees this as a golden opportunity to stop talking about the disaster of his failed response to the coronavirus pandemic and the cratering economy.

This is the same man who used Colin Kaepernick kneeling during the national anthem to protest police violence against black men as as a foil. In September 2017, at a rally in Alabama, he said NFL owners should react to protesting players by saying, “Get that son of a bitch off the field right now. He’s fired. He’s fired!”

Brooke Bobb at Vogue reports, ‘Do You Understand Now?’: George Floyd Is Exactly Who Colin Kaepernick’s Been Kneeling for All Along (excerpt):

Yesterday, LeBron James took to social media to share striking side-by-side images: one of Chauvin kneeling on Floyd’s neck and the other of Colin Kaepernick kneeling during the national anthem in 2016. (Kaepernick has stated that he knelt in protest of racial inequality and police brutality.) “This…Is Why” appears above the images in the now viral social media post. When James captioned the composite on his Instagram and Twitter feeds: “Do you understand NOW!!??!!?? Or is it still blurred to you??” 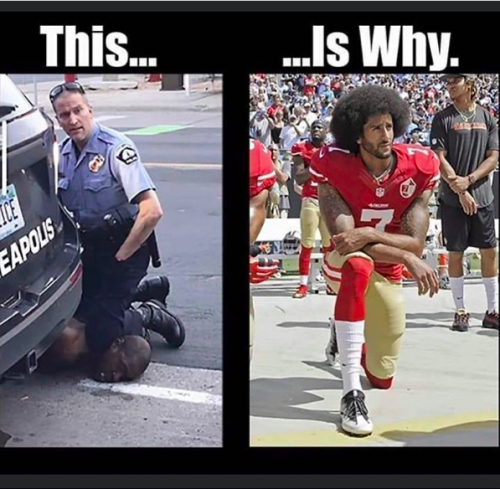 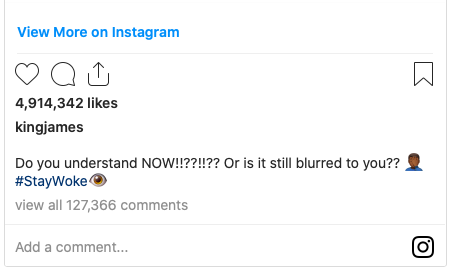 Kaepernick’s protest was initially met with criticism; many also didn’t see the connection between taking a knee during the national anthem in front of millions of viewers and the unjust killings of black men and women in the U.S. at the hands of law enforcement.

Now, looking at the image of Floyd’s neck being crushed by a white police officer’s knee next to Kaepernick’s knee on the football field, the athlete’s show of activism feels disturbingly poignant and incredibly important. It should have always been important, but now those who were confused or put off before have a visual representation of exactly what his intent was and still is today.

In the hours after James shared the image, it went viral and has been shared millions of times over on Instagram and Twitter. Kaepernick also made his own statement today via social media, writing, “When civility leads to death, revolting is the only logical reaction. The cries for peace will rain down, and when they do, they will land on deaf ears because your violence has brought resistance. We have the right to fight back! Rest in Power George Floyd.”

Two images of men kneeling, one urgent reminder to stand up for what’s right.

UPDATE: Maybe this will quell the protests. The Minneapolis Police Officer Who Knelt On George Floyd’s Neck Has Been Arrested:

Harrington said he had no other information regarding the three other officers involved in the arrest, who were fired along with Chauvin.

Chauvin is in custody of Minnesota’s Bureau of Criminal Apprehension.

Floyd’s death, captured on video as he struggled for air and begged officers to stop so he could breath, has sparked days of unrest across the country as thousands of people have gone to the streets in protest of police killings of unarmed black men.