The picture showed them gathered around a cardboard cutout of Rep. Alexandria Ocasio-Cortez (D-NY), with one of them gripping the cutout’s throat to look as if he was strangling her. 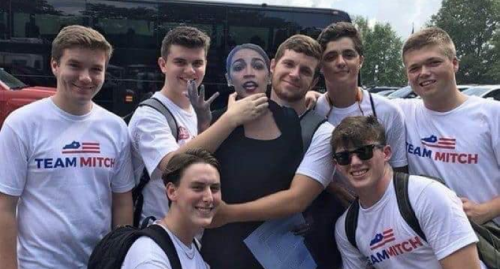 Fine young misogynist Republicans all. I’m sure women will be impressed with your finding violence towards women funny, boys. Idiots.

“Hey Senate Majority Leader—these young men look like they work for you.” 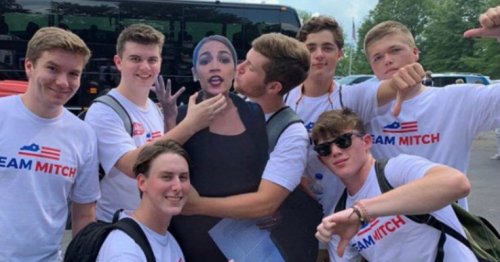 That was Rep. Alexandria Ocasio-Cortez’s response on Monday to a photo of several young men in “Team Mitch” t-shirts kissing, groping, and choking a cardboard cutout of the New York congresswoman.

The caption of the photo of Sen. Mitch McConnell (R-Ky.) backers, originally posted on Instagram, reads: “Break me off a piece of that.”

“Just wanted to clarify: are you paying for young men to practice groping and choking members of Congress with your payroll, or is this just the standard culture of #TeamMitch? Thanks.” Ocasio-Cortez tweeted Monday evening.

“Pictured: seven young white men in ‘Team Mitch’ t-shirts, gathered round a distressed looking cardboard AOC, groping and kissing her,” she wrote. “The caption, ‘break me off a piece of that.’ Future federal judges of America.”

McConnell’s spokesman said in a statement that the Kentucky Republican “in no way condones any aggressive, suggestive, or demeaning act toward life-sized cardboard cutouts of any gender” and said the young men are not officially affiliated with McConnell’s Senate campaign.

But as HuffPost reported, “Some of the same men also appeared in a photo on the official ‘Team Mitch’ Instagram account for the Fancy Farm picnic, holding aloft cutout faces of Supreme Court Justices Brett Kavanaugh and Neil Gorsuch.”

The photo of the McConnell supporters went viral after it was posted to Twitter by user @emrazz.

This was not the only inflammatory exhibition by Republicans at the Fancy Farm event.

The Kentucky Republican’s campaign team shared a photo Sunday taken at the state’s Fancy Farm annual political forum that showed Democratic candidate Amy McGrath’s name, along with the name of Merrick Garland and the word socialism, printed on cardboard tombstones. 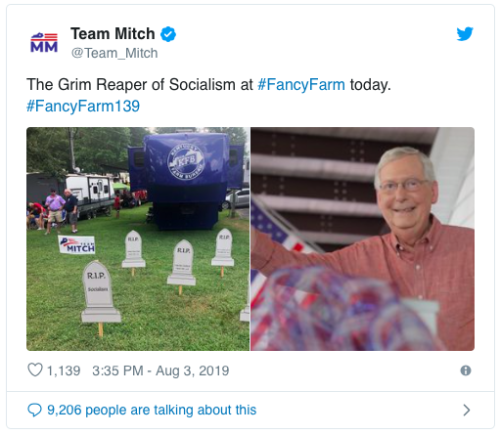 McGrath responded Monday, drawing attention to the tweet and its timing.

“Hours after the El Paso shooting, Mitch McConnell proudly tweeted this photo,” McGrath tweeted. “I find it so troubling that our politics have become so nasty and personal that the Senate Majority Leader thinks it’s appropriate to use imagery of the death of a political opponent (me) as messaging.” 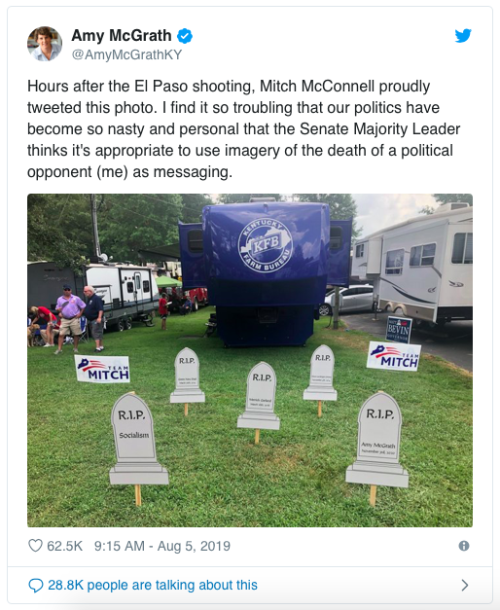 The surge in white nationalist violence can easily turn to Democratic politicians running for office. This just shows how out of touch and recklessly irresponsible Moscow Mitch is. If anything happens to these Democratic women, Mitch McConnell will bear some culpability for reckless stunts like this.

“Threats, intimidation, and hate have no place in our society. Every person in America, especially someone in a position of leadership, has a responsibility to recognize that words and actions matter. What we say and what we do inspires others to act. I am appalled that in this divisive political climate—a climate where gun violence fueled by hate is on the rise—Mitch McConnell is joking about the death of his current and former opponents and a federal judge. The nation is turning to Leader McConnell right now for leadership, and this is the furthest thing from it. Leader McConnell must apologize to Amy McGrath, Merrick Garland, and Alison Lundergan Grimes.”

The reelection campaign of Senate Majority Leader Mitch McConnell (R-Ky.) on Tuesday decried the actions of protesters outside his Louisville home over the weekend as “serious calls to violence” and said it had notified law enforcement.

A group of 20 to 30 people gathered outside McConnell’s home on Sunday night, with some voicing threats and shouting profanities during a protest that was broadcast on Facebook Live, according to an account in the New York Post.

Facebook video captured a moment where one of the protesters urged another to stab a voodoo doll representing McConnell in the heart.

Really, Mitch? Where were you when Trump supporters in New Hampshire made a voodoo doll of Hillary Clinton, “something you stick pins in and wish bad luck on”?

In tweets Tuesday, McConnell’s campaign characterized the protesters as “an angry left-wing mob of Amy McGrath supporters,” referencing a Democrat who is seeking to topple McConnell in next year’s election in Kentucky.

“These threats go far beyond a political cartoon or a broken shoulder, they are serious calls to physical violence and we’ve alerted law enforcement,” the campaign said in one of its tweets.

Never admit you did wrong; never apologize; assert that you are the real victim. This is an old right-wing playbook.