The poll was commissioned by Heinz. The Heinz campaign released a three-page summary offering highlights of the telephone survey but did not release the entire poll. The live phone survey was conducted by FM3 Research and dated May 9, 2018. It found that: 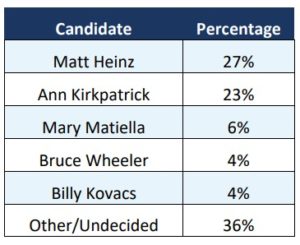 In an initial Democratic primary ballot test, Matt Heinz currently leads the field with 27%, giving him a four-point edge over Ann Kirkpatrick (23%). These results show the highly competitive nature of the Democratic primary, and despite her high-profile and well-financed statewide candidacy for the U.S. Senate in 2016, 2nd District Democrats have not embraced Kirkpatrick. The contest is very much a two-person race, as the other candidates generate only mid-single-digit support. 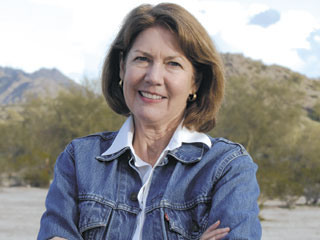 Heinz doubles his initial lead over Kirkpatrick after voters hear positive profile statements about both candidates. After learning more positive information about the candidates’ backgrounds, including their professional experience, Heinz increases his vote by 13 points and moves to an eight-point advantage (40%-32%) over Kirkpatrick. 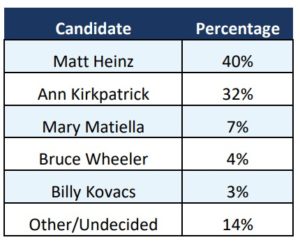 The survey data also show significant primary voter concern about many aspects of Kirkpatrick’s record. Survey respondents were read a series of descriptive phrases, and were asked if they would be more or less likely to vote for a candidate who matched such a description. Votes for Congressional Republicans’ legislation to cut Medicare and the support for Bush-era tax cuts elicited severe negative reactions – more than eight in ten Democratic primary voters would be less likely to vote for a candidate – like Kirkpatrick – who took those positions.

Voters also responded negatively to the idea that a candidate failed to vote on the DREAM Act, as six in ten (62%) said they would be less likely to vote for that person for Congress. Voters in the survey also reacted negatively to Kirkpatrick’s having received an “A” rating from the National Rifle Association.

The poll is misleading in that it mentions that Kirkpatrick “missed voting on the DREAM Act,” which would have granted legal status to certain immigrants brought here as youths. The bill never passed Congress. The statement is accurate but does not mention Kirkpatrick reportedly underwent a minor surgical procedure the day of the vote.

“In summary, these survey results show Dr. Matt Heinz to be well-positioned for the August Democratic primary election in Arizona’s 2nd Congressional District. Most voters who know him hold a favorable opinion of him, and as voters learn more information about him and Ann Kirkpatrick, Heinz significantly increases his overall support and extends his lead. Furthermore, the other top contender in the race is already viewed negatively by a fifth of the primary electorate, and opinion of Kirkpatrick has the potential to turn more negative as voters learn about her Congressional record,” the report states.

Survey Methodology: From April 29-May 3, 2018, FM3 conducted a survey of 400 randomly-selected likely August Democratic primary voters in Arizona’s 2nd Congressional District. Interviews were conducted via landline and
cell/mobile telephone by live interviewers. The full sample margin of error is +/-4.9% at the 95% confidence level. Due to rounding, some percentages may not sum to 100%.