Wow, this is a BFD! The Attorney General of New York took action today to dissolve the National Rifle Association, following an 18-month investigation that found evidence the powerful gun rights group is “fraught with fraud and abuse.”

(The Trump crime family should take notice, this is what your future holds in store for you).

Attorney General Letitia James claims in a lawsuit filed Thursday that she found financial misconduct in the millions of dollars, and that it contributed to a loss of more than $64 million over a three year period.

Seeking to dissolve the NRA is the most aggressive sanction James could have sought against the not-for-profit organization, which James has jurisdiction over because it is registered in New York. James has a wide range of authorities relating to nonprofits in the state, including the authority to force organizations to cease operations or dissolve. The NRA is all but certain to contest it.

“The NRA’s influence has been so powerful that the organization went unchecked for decades while top executives funneled millions into their own pockets,” James said in a statement. “The NRA is fraught with fraud and abuse, which is why, today, we seek to dissolve the NRA, because no organization is above the law.”

It lists dozens of examples of alleged financial malfeasance, including the use of NRA funds for vacations, private jets, and expensive meals. In a statement, her office said that the charitable organization’s executives “instituted a culture of self-dealing, mismanagement and negligent oversight” that contributed to “the waste and loss of millions in assets.”

The lawsuit seeks to dissolve the NRA in its entirety and asks the court to order LaPierre and other current and former executives to [disgorge] pay back unlawful profits. It also seeks to remove LaPierre and Frazer from the organization’s leadership and prevent the four named individuals from ever serving again on the board of a charity in New York. 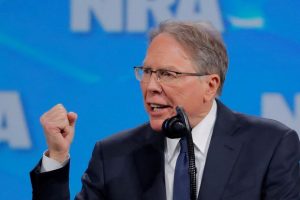 LaPierre, who also serves as CEO, has held the top position at the organization for nearly 30 years. In the Attorney General’s lawsuit he is accused of using charitable funds for personal gain, including a post-employment contract valued at more than $17 million that was not approved by the NRA’s board of directors.

The lawsuit also claims that LaPierre received more than $1.2 million in expense reimbursements over four years, including gifts for friends, travel expenses and memberships at golf clubs and hotels.

And it alleges that he spent hundreds of thousands of dollars on private plane trips, including for extended family when he was not present; traveled to Africa with his wife on a safari gifted by an NRA vendor, and spent more than $3.6 million on luxury black car services and travel consultants in the last two years.

Those that attempted to blow the whistle on this behavior, the suit claims, were retaliated against by LaPierre.

James’ lawsuit alleges that Phillips, whose job it was to manage the financial operations of the charitable organization, lied on financial disclosure forms and set up numerous deals to enrich himself and his girlfriend.

The New York Attorney General claims that Phillips set up a contract for himself just before he retired, and that the package was worth $1.8 million — purportedly for consulting services to the incoming treasurer. But the incoming treasurer told the New York attorney general that he was not aware of this contract. Phillips also directed a deal worth more than $1 million to his girlfriend, the suit alleges.

Powell is also accused of directing charitable funds to be used for the benefit of his family members. The New York Attorney General said that Powell approved of a $5 million consulting contract with the firm McKenna & Associates. That firm, in turn, hired Powell’s wife and passed her $30,000 monthly consulting fee through the NRA. Powell also arranged for an NRA vendor to hire his father as a paid photographer, leading to $90,000 in fees for his father — funds that were ultimately billed to the NRA.

The New York Attorney General did not allege that NRA general counsel John Frazer committed financial misconduct, but said that he failed to comply with board governance procedures, failed to ensure the NRA was in compliance with whistleblower laws and repeatedly certified false or misleading annual statements by the NRA.

James’ lawsuit is sure to be contested in court by the National Rifle Association.

But even before this move, the NRA was in dire financial straits. A secret recording of an NRA board meeting obtained by NPR in April showed LaPierre telling the audience that the NRA’s legal troubles have cost the organization $100 million.

“The cost that we bore was probably about a hundred-million-dollar hit in lost revenue and real cost to this association in 2018 and 2019,” LaPierre said, according to a tape recorded by a source in the room. “I mean, that’s huge.”

Much of this has to do with its legal troubles. Facing Congressional inquiries and investigations by multiple state attorneys general, as well as internal whistleblower complaints, the NRA’s finances have sagged under the burden of legal costs. In the ongoing litigation between the NRA and Ackerman McQueen, its former public relations firm, a brief filed by the firm on April 15 indicates its belief that the NRA has paid its outside legal counsel “over $54 million” in the last two years.

The turmoil at the NRA also could have political ramifications ahead of the 2020 elections. The NRA spent tens of millions of dollars in 2016 to support then-candidate Donald Trump — a role it appears it will be unlikely to be able to repeat given its current financial condition.

Well, not without its friends in the Kremlin anyway. NRA Was ‘Foreign Asset’ To Russia Ahead of 2016, New Senate Report Reveals: 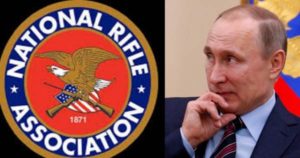 Drawing on contemporaneous emails and private interviews, an 18-month probe by the Senate Finance Committee’s Democratic staff found that the NRA underwrote political access for Russian nationals Maria Butina and Alexander Torshin more than previously known — even though the two had declared their ties to the Kremlin.

The report, available here, also describes how closely the gun rights group was involved with organizing a 2015 visit by some of its leaders to Moscow.

Then-NRA vice president Pete Brownell, who would later become NRA president, was enticed to visit Russia with the promise of personal business opportunities — and the NRA covered a portion of the trip’s costs.

The conclusions of the Senate investigation could have legal implications for the NRA, Wyden says.

Tax-exempt organizations are barred from using funds for the personal benefit of its officials or for actions significantly outside their stated missions. The revelations in the Senate report raise questions about whether the NRA could face civil penalties or lose its tax-exempt status.

That question has now been answered today.