Home/National Elections, National Politics/No ‘Unity’ Before Purging The Anti-Democratic Enablers Of This Seditious Insurrection
Previous Next

Trump enabler House Minority Leader Kevin McCarthy (R-CA) – who voted with his Sedition Caucus to overturn the certified election results of Arizona and Pennsylvania last week even after Trump’s insurrectionist MAGA red cap thugs stormed the Capitol building in a failed coup attempt hoping to hang Vice President Pence and to do equal violence to House Speaker Nancy Pelosi –  declared his opposition Monday to impeaching President Trump, arguing that members of Congress should refrain from doing so “for the sake of national unity,” the Washington Post reports.

As Paul Waldman of the Washington Post says, The phony GOP calls for ‘unity’ deserve nothing but contempt (excerpt):

Let’s be clear about something. The problem we face right now isn’t “our political divisions.” The Capitol building was not stormed by members of the Divisiveness Party.

The rioters who conducted that attack on American democracy were supporters of Donald Trump — the uncontested leader of the GOP, the president whom nearly every Republican supported, cheered on, justified, and rationalized for the past four years while he attacked American [democratic] institutions and poured hate down on anyone who disagreed with him.

So instead of asking whether Biden is doing enough to promote unity, how about we ask what Republicans are doing to bring the country together?

Aren’t they the ones who have a special obligation to do so right now, when we just saw the logical conclusion of everything they’ve done over the past four years? What are they doing — actually doing — to foster unity?

[U]nity scolding will be the way Republicans avoid accountability, for both Trump and themselves. He shouldn’t be impeached for inciting the Capitol insurrection, because that won’t unify the country. It might hurt the feelings of those who voted for him; as Trump loyalist Rep. Elise Stefanik said about the prospect of impeachment, “Stop politically shaming millions of Trump voters.”

Dwelling too much on the misdeeds of the Trump years — and their complicity — will only divide the nation, they’ll say, even as they do their best to keep their base enraged in advance of the 2022 midterm elections.

We are talking about domestic terrorism, which the FBI defines as “the unlawful use, or threatened use, of violence by a group or individual based and operating entirely within the United States (or its territories) without foreign direction committed against persons or property to intimidate or coerce a government, the civilian population, or any segment thereof, in furtherance of political or social objectives.” Shouldn’t any politician who exhorted them to march to the Capitol (as President Trump did) or supplied the propaganda that motivated them (as numerous Republican lawmakers did) forfeit their office?

Yet Trump, who triggered the attack by instructing the mob to march to the Capitol, remains president; Sens. Ted Cruz (R-Tex.) and Josh Hawley (R-Mo.), who continued to pursue the mob’s demand to overturn the election, remain in the Senate. 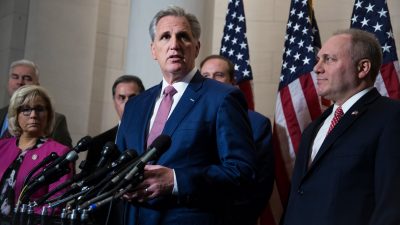 [E]ven worse, the same Republicans who pushed the lies that President-elect Joe Biden did not win now demand Democrats refrain from impeaching Trump for the sake of “unity.” Impeachment would be divisive, House Minority Leader Kevin McCarthy (R-Calif.) and House Minority Whip Steve Scalise (R-La.) argue. Keeping in place the instigator of the mob attack, I suppose, is supposed to be healing. If there is to be any reconciliation, it comes from the party’s complete repudiation of the lies about fraud and ejecting members who rode this wave all the way until Jan. 6.

Even now, the seditionists in Congress cannot denounce a president whose actions threatened the lives of their co-workers and staff. Neither they nor the Republican Senate ringleaders Hawley and Cruz express any remorse for spreading the Big Lie that the election was stolen and continuing to seek to overthrow the elected government. Their demand that we not respond to sedition is madness, and if we accept this rubbish, we have lost our moral bearings.

[S]o, no, lawmakers who voted to overturn an election do not get to lecture on unity.

[S]enators should consider not only the damage Cruz and Hawley have already wrought but also their collective refusal to renounce claims of fraud. They should take up the ultimate sanction: expulsion for Hawley and Cruz. The House should also toss out McCarthy and Scalise, enthusiastic participants in the effort to substitute Trump for the duly elected president.

What would be unifying at this point would be a unanimous vote on Trump’s impeachment and removal, followed by expulsion from Congress of the primary instigators of the bad-faith objections to the election. The only basis for unity is reaffirmation of the truth and banishment of the seditionists.

Deepak Gupta and Brian Beutler writing at the New York Times take up my argument to use the 14th Amendment, Section 3 against these traitors in the Sedition Party. Impeachment Isn’t the Only Option Against Trump (excerpt):

On Monday, House leaders introduced an article of impeachmentagainst the president for “inciting violence against the government of the United States,” an obligatory action, given the gravity of the president’s transgression. But this is not the only route for ensuring accountability. The Constitution has another provision that is tailor-made for the unthinkable, traitorous events of Jan. 6 that goes beyond what impeachment can accomplish.

Emerging from the wreckage of the Civil War, Congress was deeply concerned that former leaders of the Confederacy would take over state and federal offices to once again subvert the constitutional order. To prevent that from happening, Congress passed the 14th Amendment, which in Section 3 bars public officials and certain others who have “engaged in insurrection or rebellion” against the Constitution from serving in public office. Although little known today, Section 3 was used in the post-Civil War era to disqualify former rebels from taking office. And, in the wake of perhaps the boldest domestic attack on our nation’s democracy since the Civil War, Section 3 can once again serve as a critical tool to protect our constitutional order.

The 14th Amendment gives Congress the power to enforce Section 3 through legislation. So Congress can immediately pass a law declaring that any person who has ever sworn to defend the Constitution — from Mr. Trump to others — and who incited, directed, or participated in the Jan. 6 assault “engaged in insurrection or rebellion” and is therefore constitutionally disqualified from holding office in the future.

Congress can also decide how this legislation will be enforced by election officials and the courts, based on all the facts as they come out. The Constitution prohibits Congress from enacting so-called bills of attainder, which single out individuals for guilt. But, in addition to the legislation we suggest, Congress could also pass nonbinding sense-of-Congress resolutions that specify whom they intend to disqualify. This would provide a road map for election officials and judges, should any people named in those resolutions seek to run for or hold public office. And Congress can do this by a simple majority — far less of a hurdle than the two-thirds majority in the Senate that removing the president requires.

We believe legislators of conscience should brandish this option not as a substitute for impeachment but as a complement to it. Senators shouldn’t be allowed to escape or indefinitely delay a vote on Mr. Trump’s conduct simply by running out the clock on his term. (The Senate majority leader, Mitch McConnell, has suggested no trial will happen before the inauguration.) Republicans should be on notice that whether or not they face a vote on conviction and removal of Mr. Trump, they will at the very least be compelled to vote by a Democratic-controlled Congress on barring Mr. Trump from ever holding public office again.

This option also has power that the impeachment process lacks. As we learn more in the coming months about who is culpable for the siege, the ranks of those disqualified from office will likely swell. The legislation we envision would allow future courts and decision makers to apply the law after the investigations are complete. Eventually, we should have a 9/11 Commission-style report on what led to these events; the facts marshaled there can be deployed under the legislation we propose.

[M]ake no mistake: This was an insurrection. The 14th Amendment disqualifies its instigators from public office, whether the president is convicted in a Senate trial or not.

House Speaker Nancy Pelosi has floated the possibility of expelling members of Congress who are found to have been involved in the riot. “Your views on the 25th Amendment, 14th Amendment Section 3 and impeachment are valued as we continue,” she wrote to her colleagues over the weekend.

The 14th Amendment, Section 3 also has the advantage of applying to state legislators and other state government officials as well.