Mayor de Blasio joined protesters Thursday in painting a vibrant yellow “Black Lives Matter” mural on the street outside Trump Tower, delivering a message to the president on his old home turf.

“No justice, no peace!” chanted the demonstrators, raising their fists in solidarity as an outnumbered group of critics expressed their disdain during an intense five-minute confrontation. “Black lives matter!”

De Blasio, ignoring insults hurled from the Fifth Ave. sidewalk, used a roller to help paint the bright yellow letter “L” on a sweltering afternoon where a stretch of the Midtown thoroughfare outside President Trump’s Manhattan skyscraper was closed.

The ringing chants from the street drowned out the sidewalk calls of “All lives matter!” as the protesters leaned into the task outside Trump’s signature building.

The mayor, with his sleeves rolled up, painted against the backdrop of an American flag hanging just inside the entrance to the luxury high-rise where Trump resided for years. President Donald Trump fumed at the plan after it was announced by city officials earlier this month.

He called the words “Black Lives Matter” a “symbol of hate” and suggested that police officers could block the work: “Maybe our GREAT Police, who have been neutralized and scorned by a mayor who hates & disrespects them, won’t let this symbol of hate be affixed to New York’s greatest street. Spend this money fighting crime instead!”

“When we say ‘Black Lives Matter’ there is no more American statement, there’s no more patriotic statement, because there is no America without Black America. We are acknowledging the truth in ourselves and in America. By saying ‘Black lives matter’ we are righting a wrong,” de Blasio said.

The mural marks the second time the words appeared in large letters outside one of Trump’s homes; Washington’s mayor had the term painted in large yellow letters on a street near the White House last month.

Protester Mike Tucker, 54, said his appearance at the event was personal: His son was killed by an NYPD bullet in 2005. He was hopeful the angry sidewalk crowd would understand why the the group’s public statement was important in these times of racial unrest following the Minneapolis police killing of George Floyd.

“This is not a symbol of hate,” he said. “We are just trying to get respect, and we are saying our lives matter. It doesn’t matter, the color of our skin. We should matter at all times.”

Tucker said he hoped Trump was watching the event.

“He has an opportunity to do something that he hasn’t done since he was in office, and send an encouraging and healing message to everybody that racism will not be tolerated,” said Tucker.

His 21-year-old son Stephone Crawford was accidentally shot in East New York during a 2005 scuffle with cops who were trying to question him about a separate shooting. Crawford was killed instantly when a detective’s gun discharged, cops said at the time. 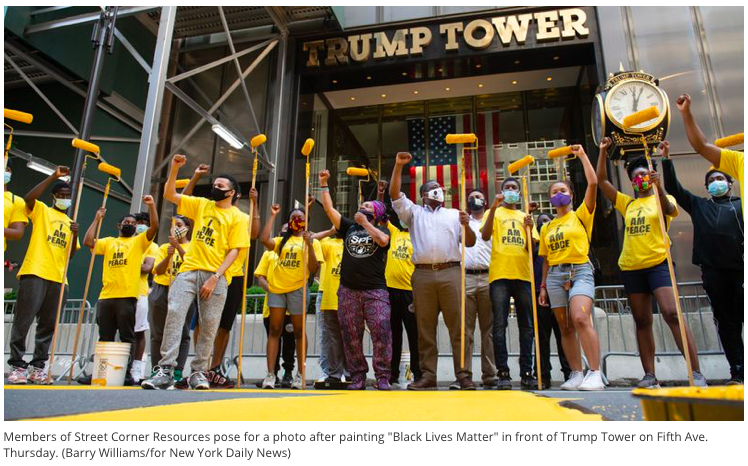 Iesha Sekou, CEO and Founder of Street Corner Resources, brought along kids from her organization to help with the painting, and each wore a yellow T-shirt with the words “I Am Peace” on the front and “Black Lives Matter” on the back.

“We’re just encouraging peace all across, not just the city, not just the country, but across the world,” explained the 60-something Sekou, a veteran for decades of the civil rights movement. “We are all moving together to create peace and hopefully a better world.”