The president could also announce some measures to address the issue of race and policing in the United States that he can do on his own with an executive order, the official said.

[T]he White House has yet to settle on a message in reaction to concerns about police brutality and systemic racism in law enforcement that have triggered widespread protests.

White House aides had hoped earlier in the week that Trump would formally unveil a package of proposals on policing reforms as early as Thursday, administration officials told NBC News.

In an interview on The Last Word with Lawrence O’Donnell on Tuesday, national security expert Malcolm Nance warned President Donald Trump will only enflame tensions by delivering an address to the nation on race. Malcolm Nance predicts Trump will ‘tell us what’s good for us as African-Americans’ in a ‘black carnage speech’:

“Malcolm Nance, your reaction to the possibility of a race relations speech being delivered to this nation by Donald Trump?” MSNBC’s Lawrence O’Donnell asked.

“If it wasn’t so terrible, it would be laughable,” Nance replied.

“I think we’re going to actually see the black carnage speech,” he predicted.

“And I think what you’re going to get is the most incredible whitesplaining that has happened since the Articles of Secession in the Civil War. I mean literally, he is going to tell us what’s good for us as African-Americans.”

“It’s going to be gasoline by the bucket loads on the fire,” he warned.

What could possibly go wrong?

“There seems to be some debate over at the White House, Maggie, over whether the president will in fact address this moment with the speech on race and unity,” said anchor Wolf Blitzer. “What are you hearing about his advisers? What are they recommending? They can recommend anything they want, but in the end the president has to make the final decision.”

“Right. That is the issue, Wolf,” said Haberman. “Sometimes advisers float these ideas to see how much blowback it gets and how the president himself will react. The president has not wanted to give a speech. That doesn’t mean he definitely won’t, but he has not wanted to. He also has not wanted to do listening sessions with Black leaders outside of his own supporters or people coming to the White House.”

“I don’t think he is going to do a speech,” said Haberman. “The speech advisers are concerned about him giving right now is the one he is expected to give at the West Point graduation on Saturday. He has a tendency to be off script. They are concerned he will do that there and it could be problematic.”

It gives me considerable pause, for example, to note that my alma mater, West Point, honors Robert E. Lee with a gate, a road, an entire housing area, and a barracks, the last of which was built during the 1960s. A portrait of Lee with an enslaved person adorns a wall of the cadet library, the counterpoint to a portrait of Grant, his Civil War nemesis, on a nearby wall.

Lee’s history is, in fact, thoroughly woven through that of West Point and the Army. Before he was the commander of the Confederate Army of Northern Virginia, Lee was an outstanding cadet, a distinguished chief of engineers in the Mexican War, and later the West Point superintendent … But remembering Lee’s strengths and weaknesses, his military and personal successes and failures, is different from venerating him.

But Confederate leaders are different from these other examples not simply in degree, but in kind: Plainly put, Lee, Bragg, and the rest committed treason, however much they may have agonized over it. The majority of them had worn the uniform of the U.S. Army, and that Army should not brook any celebration of those who betrayed their country.

Stephen Miller and Donald Trump would take the opportunity to venerate General Robert E. Lee and his connection to West Point at this moment. They would not treat Lee like General Benedict Arnold, who defected from the Continental Army to the British side of the American Revolution in 1780, and became the quintessential American symbol of a traitor. That’s how every West Point graduate who fought for the Confederacy should have been treated.

Paul Waldman at the Washington Post tries to imagine what kind of speech our racist-in-chief “law and order president” could give on race in America. What might happen if Trump gives a speech on race:

When it was reported that Stephen Miller was drafting a speech for President Trump to deliver about race in America, the inevitable reaction was a combination of incredulity and horror. Such a speech may never happen, as other reporters have suggested; perhaps the idea was batted around but won’t come to fruition.

Nevertheless, it’s worth contemplating. What exactly would Trump have to say on the subject of race at this moment in our history? The president is often called upon to help the country make sense of crises. But could he do anything other than make things worse?

It’s hard to answer this without being constantly reminded that Trump is a rather obvious bigot (see here or here or here or here or here). But regardless of his lifetime of animus toward people who aren’t white, Trump has had a simple message for black Americans throughout his presidency, one he’d likely repeat in such a speech: You should be thanking me.

Trump sees himself as a generous ruler bestowing his largesse upon supplicant blacks, mostly because the steadily declining unemployment rate that he inherited from former president Barack Obama and that continued through most of his first term meant that unemployment among black people declined, too. So he has said that he “has done more for the Black Community than any President since Abraham Lincoln.”

Since he is incapable of giving a speech without praising himself, that would no doubt be a major theme.

Trump might discuss America’s history, but in doing so he’d tell a very particular story, one favored by conservatives. In that story, racism is largely a thing of the past — a problem that has been solved save for the lingering ill will of a few reprobates. All that is required to exonerate oneself is to believe that one harbors no hostility toward people of color as a group. Or, as Trump himself has said, “I am the least racist person that you have ever met.”

What Trump certainly would not do is ask Americans to think less about individuals and more about structures — about the fact that racism resides within systems of discrimination and oppression, systems that white people continually benefit from and that don’t depend on any particular person with power having a Klan hood hidden away in their closet.

In short, if Trump tried to talk at length about race, he’d do it in a way meant to get black people to stop making demands, and reassure white people they have nothing to feel guilty about.

White rage is something Trump knows well; he rode it all the way to the White House. If he were actually to give a speech on race, it would seek to validate their anger and assure them that racism is not their fault. If it has a few lingering effects, those can be solved easily and with no sacrifice or attitude adjustments from anyone.

We’d toss a few bucks at historically black colleges and universities; Trump would declare, then create some “opportunity zones” where developers (like Jared!) could get tax breaks, and go back to insisting that no president has done so much for black people as he has.

I’m sure there are some Trump advisers who think that if a speech were crafted carefully enough it could assure his base that he is still with them while convincing moderates that he’s not the person he so plainly is. But the truth is that you couldn’t write a speech for Trump that would be anything other than white anger and self-congratulation. It’s all he has in him.

He should keep his mouth shut, but he is simply incapable of doing so.

UPDATE: The president has already said all he needs to say about racism and Black Americans, and it’s not good, according to the Washington Post‘s Dana Milbank, who compiled Trump’s past remarks in this opinion. Here is Trump’s speech on race — word for word, alas. Does anyone believe he would say anything different?

UPDATE: After Ronald Reagan secured the GOP nomination in 1980, his first campaign stop was the Neshoba County Fair, about 7 miles from Philadelphia, Mississippi, the town associated with the murders of civil rights activists Chaney, Goodman, and Schwerner in 1964 (“Mississippi Burning“). Reagan chose that location to give a speech about “states rights,” racist code for opposition to civil rights. The use of the phrase was seen by many as a tacit appeal to Southern white voters and a continuation of Richard Nixon’s Southern strategy.

With this in mind, comes this disturbing report. Trump to resume MAGA rallies on Juneteenth at the site of the ‘single worst incident of racial violence’:

President Donald Trump’s long racist history will gain another notch on his belt when he resumes holding his official campaign rallies by flying to the city of the “single worst incident of racial violence in American history” on a Juneteenth, a sacred day celebrating the end of slavery.

Next week, on Friday, June 19 – which just happens, coincidentally, to be Juneteenth – the President will board Air Force One and jet off to Tulsa, Oklahoma, where 99 years ago this month anywhere between dozens and hundreds were horrifically slaughtered in the Tulsa Race Massacre. 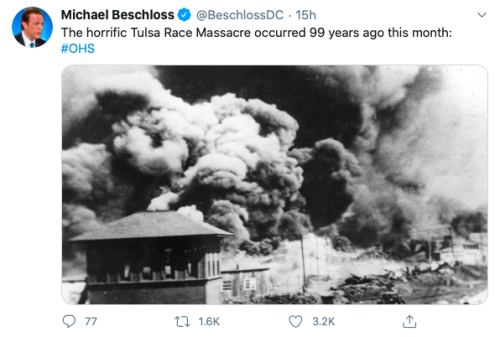 “The Trump campaign’s choice of Tulsa on Juneteenth is curious given the city’s history,” The Washington Post noted. “The worst single incident of racial violence in U.S. history occurred in Tulsa in 1921, when mobs of whites killed dozens of African Americans, injured hundreds and destroyed a black neighborhood. Trump’s announcement comes as thousands protest racial injustice across the United States.”

In addition to the lives lost, nearly 7000 were wounded and had to be hospitalized or housed in large facilities. 35 square city blocks of what was called at the time “Black Wall Street,” for its affluent population, were burned to the ground, at a loss of wealth in modern day terms of over $30 million.

Juneteenth, also known as Freedom Day, is a day celebrating the end of slavery. On that day in 1865, Lincoln’s Emancipation Proclamation was finally read to slaves in Texas, the last Confederate state to announce the proclamation – two and a half years after it had been signed.

Another Day, another Lincoln Project Ad and another group of Republicans forming an Anti Trump PAC

Arizona School Board Candidates React to the Delay in Reopening Schools

Less than Two Days to get Invest in Ed and Second...

How Many Ways Can Arizona Flub Its COVID19 Response Simultaneously? (video)