Above: The Normandy American Cemetery overlooking Omaha Beach east of St Laurent-sur-Mer. There are 9,387 crosses or stars of David made of Carrara marble marking the graves.

Saturday was the 76th anniversary of the D-Day invasion of “Fortress Europe” on the beaches of Normandy on June 6, 1944, in a war to rid the world of fascism.

World War II was the deadliest military conflict in history. An estimated total of 70–85 million people, military and civilian, died directly as a result of the military conquests by the fascist Axis powers, which accounted for about 3% of the 1940 world population (est. 2.3 billion).

More than 16 million Americans served in the U.S. armed forces in World War II. More than 405,000 American soldiers lost their lives in this war to rid the world of fascism.

America won the war, but it failed to rid the world of fascism, because one cannot destroy an idea or an ideology.

There was a pro-fascist movement in the United States before the war, i.e., the America First Committee, the motto of Nazi-friendly Americans in the 1930s; the German American Bund; and even American Fascist (Italian) and Nazi (German) parties.

Bradley W. Hart’s book Hitler’s American Friends: The Third Reich’s Supporters in the United States argues that the threat of Nazism in the United States before World War II was greater than we generally remember today, and that those forces offer valuable lessons decades later — and not just because part of that story is the history of the “America First” idea, born of pre-WWII isolationism and later reborn as a slogan for now-President Donald Trump. More Americans Supported Hitler Than You May Think.

Hart theorizes the American story of World War II is such a powerful national narrative: the United States, that narrative says, helped save the world. Rocked by Pearl Harbor, Americans stepped up to turn the tide for the Allies and thus solidified their nation’s place as a global superpower. But that narrative doesn’t have much room for the relatively small, but significant, number of Americans who were rooting for the other side.

This is why we still have the sickening existence of pro-fascist and pro-Nazi movements in the United States, who dishonor all those patriotic Americans who proudly served their country, and the hundreds of thousands of Americans who gave their lives to rid the world of fascism.

On Saturday, the anniversary of D-Day, Trump Rants About Antifa From His Bunker As Tens Of Thousands Of Americans March For Change:

As tens of thousands of Americas all across the country take to the streets to protest in the wake of George Floyd’s murder, Donald Trump is ranting conspiracy theories from his bunker.

In a tweet on Saturday morning, Trump boasted about a crowd of supporters that turned out during his Friday visit to Maine. 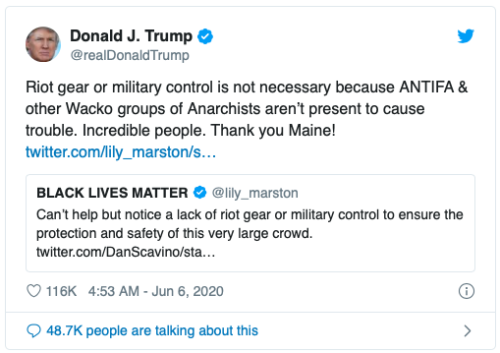 Just to be clear: if one is opposed to anti-fascism – see all those American patriots in the Normandy American Cemetery above – by definition, one is declaring oneself to be pro-fascist. This man sickens me.

Antifa, short for anti-fascist, is a broad, community-based movement composed of individuals organizing against racial and economic injustice. Those who identify with the label represent a large spectrum of the political left. The Trump administration frequently uses the term to describe any group or individual that demonstrates in opposition to its policies. Far-right extremists use similar tactics.

The move by the president is an unprecedented and alarming development with significant implications for the civil liberties of U.S. citizens, particularly those of color, who are already disproportionately policed. The designation would grant federal law enforcement broad powers, under the federal terrorism code, to surveil and investigate anyone labeled as antifa. It could also allow federal law enforcement to broadly target anyone involved in protests viewed unfavorably by the Trump administration, even retroactively.

President Trump’s announcement is rooted in politics, not the present realities of the terror threat in the U.S. Classifying antifa as a domestic terror organization has been a wish-list item for the president’s allies on the far right and in the conservative mainstream for years. The designation retreads some of the darkest moments in our federal law enforcement’s past, further victimizes communities that have already been wronged and presents a dire threat to the civil liberties of all citizens.

Rmuse writes at Politicususa, Opinion: Before Trump an anti-fascist was a patriot defending democracy:

The greatest threat to America and its people remains fascism – particularly domestic fascism. Until a few years ago, being against fascism was regarded as being a patriotic American, and then a dyed-in-the-wool fascist took up residence in the White House. Not long after Trump’s poorly-attended inauguration, his white supremacist supporters began labeling opposition to Trump’s white supremacist tendencies as inherently wrong, un-American, and anti-fascist.

The Unite the Right rally was a white supremacist and neo-Nazi rally that was conducted in Charlottesville, Virginia, from August 11 to 12, 2017. Protesters were members of the far-right and included self-identified members of the alt-right, neo-Confederates, neo-fascists, white nationalists, neo-Nazis, Klansmen, and various right-wing militias. Or as Donald Trump called them, “very fine people.”

During World War II over 16 million Americans fought in a mighty bloody war to crush fascism as a means of preserving democracy. Today, with a fascist in the White House, being against fascism and supporting America’s Constitution and representative democracy is terrorism fraught with danger from America’s fascist-in-chief Trump.

America as a representative democracy is being savaged by Trump and his far-right, authoritarian, and  ultranationalist loyalists dreaming of Trump’s uncontested dictatorial power and violent suppression of the opposition – precisely what the nation has witnessed live and in living color over the past two weeks.

The events surrounding yet another Black man being murdered by a racist white police officer while three colleagues looked on revealed to Americans precisely what the United States War Department warned was a genuine threat to American democracy – domestic fascism. It is almost certain that until Trump, no American institution, and certainly no federal government official, would have dreamed that any American opposed to fascism would be labeled a terrorist.

In 1945 after America and its allies defeated fascism in the Second World War, the U.S. War Department recognized fascism’s inherent danger to democracy and issued a memorandum titled “Fascism!” The official government memorandum addressed the prospects of what it called “domestic fascism” labeling it “a genuine threat to America’s democracy.” The war department memorandum laid out the conditions that would contribute to the rise of fascism including how fascists would use “undemocratic methods that are properly defined as fascist.” The memorandum stated:

“At various times in our history, we have had sorry instances of lynchings, vigilantism, terror, and suppression of civil liberties. We have had hooded gangs, Silver Shirts, and racial and religious bigots. All of them, in the name of Americanism, have used undemocratic methods and doctrines which experience has shown are properly identified as ‘fascist.’” (author bold)

The War Department then warned the people that, “An American Fascist would not proclaim that he is a Fascist. Fascism always camouflages its plans and purposes . . . It would work under the guise of ‘super-patriotism’ and ‘super-Americanism.’” (author bold)

Last week Trump utilized a different, but just as effective, means of camouflage to conceal his intent to rule like a proper fascist dictator claiming he was a super law and order president. It is typical that a criminal would openly claim that law and order was his primary concern, and then criminally violate his oath of office. Trump violated his “so help me god” oath by directing his dirty Attorney General to order the military and law enforcement to use rubber bullets, flash grenades, and chemical weapons against American citizens exercising their First Amendment right to “peaceably assemble for redress of their grievances.”

It is not surprising that Republicans led by Attorney General Bill Barr and Trump have tried in vain to portray patriotic Americans against (Trump’s) fascism as terrorists responsible for all manner of offenses against Trump. On Friday it was reported that “none of the 22 criminal complaints representing the first wave of protest charges mention ‘Antifa’ in any way.”

The report’s authors also noted that “Antifa isn’t an organization, but a decentralized movement and collection of tactics;” such as protesting against white supremacists, religious bigots, Nazis, and fascists led by Trump. The criminals involved in violence during the protests were either anarchists or Trump’s acolytes in the far-right “boogaloo movement.” The authors summarized Antifa’s involvement in protests thus:

“What it (criminal complaints) definitely demonstrate is that anti-fascism is not a driving force in the current protest violence.”

In a typical claim by one of Trump’s war mongering Republicans in the Senate, Tom Cotton (R-AR) tweeted: “Let’s see how tough these Antifa terrorists are when they’re facing off with the 101st Airborne Division.”

If Cotton had a modicum of intelligence regarding American war history, he would certainly know that the 101stAirborne Division was instrumental in laying waste to two fascist regimes during World War II. In fact, this author’s uncle served in that esteemed division during WWII and claimed the only reason to go to war was to crush fascism. Cotton, Trump and Barr have no concept of history or they would stop defaming Americans supporting and preserving democracy as terrorists.

It is apparent to any semi-conscious American that Trump and his un-American allies are raging against anti-fascists because they are either devout fascists or support Trump’s fascist regime. As the U.S. War Department elucidated in 1945, domestic fascists (like Trump and his devotees) would claim to be “super-patriots” and “super-Americans” and be comprised of gangs, racial and religious bigots and use “undemocratic methods” to instill terror – including “suppression of civil liberties in the name of Americanism.”

There is only one reason Trump is labeling patriotic Americans against fascism as terrorists – because he is a fascist. During World War II the entire nation mobilized against fascism and made huge sacrifices to preserve democracy. Trump has made it abundantly clear that he has no use whatsoever for democracy because it is the polar opposite of his preferred means of ruling as a dirty Hitler-like fascist dictator.

As I warned the other day, it is A time for choosing: America, or dictator Donald Trump. I will honor the service of my father and many other relatives who proudly served this country during World War II to rid the world of fascism. I am a proud patriotic American who is proudly anti-fascist. And I believe that the vast majority of Americans are also.