There is one senate race yet to be decided this Tuesday, in a run-off election in Mississippi.

Republican senator Cindy Hyde-Smith, who was appointed by Gov. Phil Bryant in March to fill retiring GOP Sen. Thad Cochran’s seat, is a virtual cartoon character villain of the “Old South” rather than the New South image that Old Dixie would like to portray to the rest of the world.

On Nov. 11, a video appeared on social media showing Hyde-Smith saying that if she were invited by one of her supporters to a “public hanging,” she would be in “the front row” (just like the girl above).

Perhaps Senator Hyde-Smith should visit the Legacy Museum and National Memorial for Peace and Justice in Montgomery, Alabama to get a better moral sense of the racial terrorism of hangings and lynchings of 4400 African-American men, women, and children who were hanged, burned alive, shot, drowned, and beaten to death by white mobs between 1877 and 1950.

On Nov. 15, another video emerged of Hyde-Smith telling a group of people that “there’s a lot of liberal folks in those other schools who that maybe we don’t want to vote. Maybe we want to make it just a little more difficult. So, I think that’s a great idea.”

What she means, of course, is African-Americans who overwhelmingly vote Democratic — when they are allowed to vote and their vote is not suppressed by white politicians like Senator Hyde-Smith.

On November 20, a Facebook post surfaced in which Hyde-Smith is seen posing for a photo wearing a Confederate soldier’s hat and holding a rifle.  She wrote in her Facebook post, “I enjoyed my tour of Beauvoir. The Jefferson Davis Home and Presidential Library located in Biloxi. This is a must see. Currently on display are artifacts connected to the daily life of the Confederate Soldier including weapons. Mississippi history at its best!”

[A] report in a Mississippi newspaper revealed the Republican incumbent graduated high school at a segregation academy.

A photograph from the 1975 edition of the Lawrence County Academy yearbook, published Friday by the Jackson Free Press, appears to show Hyde-Smith among a group of cheerleaders — including a mascot holding a Confederate flag who appears to be wearing a costume imitating a Confederate general’s uniform. A sophomore girl in the picture is identified in the caption as Cindy Hyde. 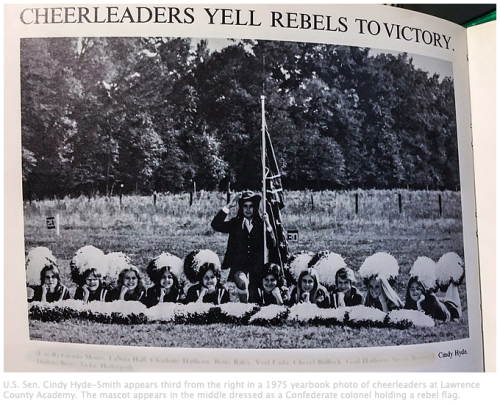 Following the Supreme Court’s 1969 mandate that America’s public schools must immediately be desegregated — 15 years after the initial Brown v. Board of Education decision calling segregation unconstitutional — Lawrence County Academy in Monticello, Mississippi, was one of many high schools established in the South on behalf of white parents who did not want their children to be educated alongside black students.

Lawrence County Academy opened one year after the Supreme Court’s order, in 1970, the Free Press reported. Hyde-Smith graduated in 1977, meaning she would have been enrolled elsewhere at the time of the academy’s founding, according to the Free Press.

Hyde-Smith would go on to enroll her daughter at Brookhaven Academy, another Mississippi segregation school founded in 1970, the Free Press reported.

Senator Hyde-Smith is in a run-off election with Democrat Mike Espy, a former Cabinet secretary under Bill Clinton, who would become the first African-American to represent the Mississippi in the Senate since Reconstruction.

Born in North Carolina in 1827, Hiram Revels attended Knox College in Illinois and later served as minister in the African Methodist Episcopal Church in Baltimore, Maryland. He raised two black regiments during the Civil War and fought at the battle of Vicksburg in Mississippi. The Mississippi state legislature sent him to the U.S. Senate during Reconstruction where he became an outspoken opponent of racial segregation. Although Revels served in the Senate for just a year, he broke new ground for African-Americans in Congress.

In a just world, Mike Espy would win this race, but “The Littlest Rebel” Cindy Hyde-Smith is favored to win because “Mississippi Goddam.”

UPDATE: America’s racist-in-chief is headed to Mississippi on Monday to campaign for “The Littlest Rebel” Cindy Hyde-Smith. Time to break out the Confederate battle flags and freshly starched white sheets. Will there be a good old-fashioned cross burning at these Trump rallies? Because there will surely be at least a rhetorical lynching of a black man, Mike Espy, by the racist-in-chief and “The Littlest Rebel.” 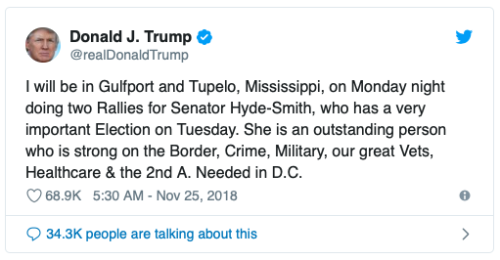 Corporate America needs to disassociate itself from the racist-in-chief as well.