Out of touch Plutocrat Jeb(!) says Americans need to work longer hours and be more productive

Out of touch Plutocrat Jeb(!) says Americans need to work longer hours and be more productive

We haven’t even made it to the first GOP presidential debate yet and already the out of touch Plutocrat Jeb(!) Bush has stepped on a rake and made a gaffe on par with Willard “Mittens” Romney’s infamous “47 percent” comment that doomed his campaign. Jeb(!) has been doing this with some regularity. 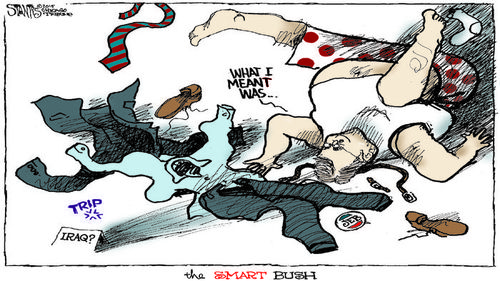 Jeb(!) has argued publicly against the federal minimum wage. He’s also called for imposing a higher retirement age on Americans. “Is there anything else the Republican can say to put him at odds with U.S. workers?” Steve Benen reports, Jeb Bush’s plan: Americans ‘should work longer hours’;

As it turns out, yes. Politico reported overnight:

The GOP presidential contender made his suggestion during an interview with the conservative New Hampshire newspaper, The Union Leader, on Wednesday to address a variety of issues, including a tax reform agenda that Americans could expect under his administration, ABC News reported.

Because context is everything in a case like this, these were Bush’s exact words: “My aspiration for the country — and I believe we can achieve it — is 4 percent growth as far as the eye can see. Which means we have to be a lot more productive. Workforce participation has to rise from its all-time modern lows. It means that people need to work longer hours and, through their productivity, gain more income for their families. That’s the only way we’re going to get out of this rut that we’re in.”

Some of this is surprisingly tone-deaf and some of it’s just incorrect. Bush’s talk about 4% GDP growth, for example, is a number he chose almost at random, and which is based on no substantive economic analysis whatsoever. [See FACT CHECK: Jeb Bush’s promise of 4 percent growth is a stretch, and Fact Check: Could Jeb Bush Really Grow GDP At 4 Percent? It’s Hard To See How.] 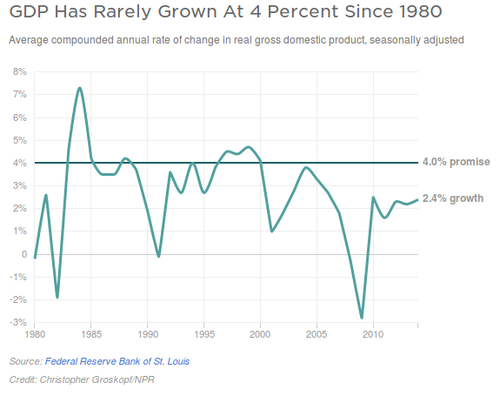 For what it’s worth, the Florida Republican, not long after his interview, clarified that his comments were about part-time vs. full-time employment. [Note: Gallup data shows that the big drop in hours worked by part-time employees that Jeb(!) is pointing to as what he meant by his “longer hours” gaffe actually occurred during his brother’s administration and has been fairly steady for years.] 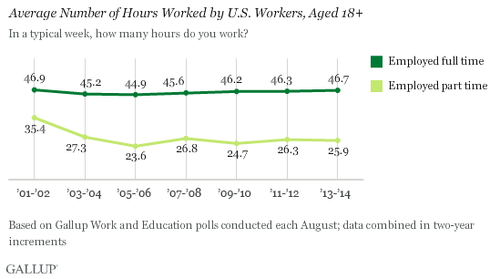 But it’s Jeb’s insistence that Americans “need to work longer hours” that’s likely to haunt him for a while. Mitt Romney’s out-of-touch rhetoric didn’t do his GOP campaign any favors in 2012, and Bush is well on his way to contracting the same foot-in-mouth disease.

As a matter of Economics 101, Bush’s broader points have at least some technical merit. When an economy has more full-time workers, it means more economic activity. When employees work more hours, it means more output and greater growth. None of this is controversial.

The problem with Bush’s rhetoric, however, is the real-world implications, and the degree to which he fails to understand the issue.

For example, the Republican candidate, who made $5.8 million in “consulting and speaking” income in 2013, makes it sound as if sluggish economic growth is your fault – you’re just not working enough hours. In reality, however, full-time employment is soaring when compared to part-time employment, and Americans are already working, on average, 47-hour weeks.

As anyone who looks at the data can confirm, Americans’ productivity isn’t the problem. 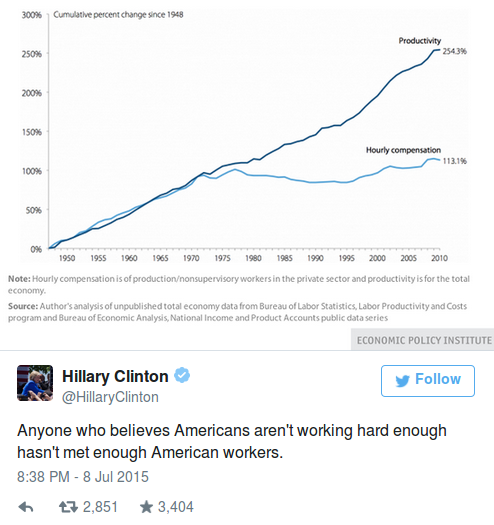 And second, Bush isn’t just struggling to understand the details, he’s also proposing no solutions. Aside from more tax breaks for the rich, the former governor, whose economic record isn’t nearly as good as he thinks it is, has no meaningful plan to address the problems he’s describing. Indeed, as far as Bush is concerned, the economy hasn’t even improved during the Obama era – an argument that’s obviously bonkers given the strides we’ve made since the economy collapsed under the last Bush presidency.

If Jeb Bush’s campaign was hoping to make the economy its signature issue, the candidate and the aides he inherited from his brother and father probably ought to consider an alternative. This just isn’t going well.

The disproved and discredited faith based supply-side “trickle down” GOP economics would only make our economy worse. Bush’s advisers are the same geniuses (sic) who advised “W” and gave us the Bush Great Recession, from which we are still digging out of that hole today. Learn from your mistakes people, don’t repeat them.