“The ballot is stronger than the bullet” has entered the popular imagination as a powerful Abraham Lincoln saying. “Throughout his life, in both his own writings and in others’ recollections of the president, this theme of voting having more power than violence holds steady, as does his commitment to the importance of free and fair elections.” Lincoln And Elections.

This has been a bedrock American value taught to generations of American children. It is what has distinguished the United States from almost every other country in the world (the American Civil War and Lincoln’s assassination the exception).

The anti-democratic authoritarian wannabe tin pot dictator of a banana republic, Donald Trump, now threatens to end this long-standing American value. Trump on peaceful transition if he loses: ‘Get rid of the ballots’ and ‘there won’t be a transfer’:

President Donald Trump was asked Wednesday whether he would commit to a peaceful transfer of power should he lose this fall to Democratic presidential nominee Joe Biden. The president declined to do so.

“Well, we’re going to have to see what happens,” Trump said. “You know that I’ve been complaining very strongly about the ballots, and the ballots are a disaster.”

Pressed further, Trump said: “We’ll want to have — get rid of the ballots and you’ll have a very — we’ll have a very peaceful — there won’t be a transfer, frankly. There’ll be a continuation.”

Earlier Wednesday, Trump said he wanted to have the next Supreme Court justice confirmed ahead of the election so the high court could  decide the contest. [A Bush v. Gore 5-4 vote].

“I think this will end up in the Supreme Court, and I think it’s very important that we have nine justices, and I think the system’s going to go very quickly,” Trump said at the White House, adding that “having a 4-4 situation is not a good situation.”

Asked about the comments Wednesday, Joe Biden quipped: “What country are we in?

By pointedly declining to answer that “there will be a peaceful transition of power,” there is an implicit threat of resort to violence to retain power. Donald Trump’s Incitements to Violence Have Crossed an Alarming Threshold (excerpt):

In December, 2016, Steven Levitsky and Daniel Ziblatt, two political scientists at Harvard, published an opinion piece in the Times that posed the question “Is Donald Trump a Threat to Democracy?” Relying on a set of criteria for anti-democratic leaders created by Juan José Linz, a Spanish expert on totalitarianism, which includes the incitement of violence for political purposes, the two scholars determined that Trump “tests positive.” During that year’s Presidential campaign, they reminded readers, Trump had incited violence by encouraging his supporters to rough up protesters at his rallies.

In their Times piece, and at greater length in their book, “How Democracies Die,” from 2018, Levitsky and Ziblatt developed the theme that Trump had authoritarian inclinations—and they also emphasized the fact that he took over the Presidency during a period of intense political polarization, when other right-wing extremists were already questioning the legitimacy of their political opponents. While American democracy wasn’t in imminent danger of collapsing, they wrote, “We must be vigilant. The warning signs are real.”

Right now, those signs couldn’t be flashing any brighter. Over the weekend, Trump cheered on a caravan of his supporters that confronted groups of Black Lives Matters demonstrators in Portland, Oregon, the site of months of ongoing protests, some of which have turned violent. In the clashes that ensued, one person—Aaron (Jay) Danielson, a supporter of the far-right group Patriot Prayer—was shot and killed. Not content with fanning the flames in Portland, Trump retweeted a message that was supportive of Kyle Rittenhouse, the seventeen-year-old Illinois teen-ager who shot three protesters in Kenosha, Wisconsin, last week, killing two of them. Then, at a press conference on Monday, Trump defended Rittenhouse, suggesting that he had acted in self-defense.

“I find it, frankly, terrifying,” Levitsky told me on Monday, when I called to ask him about Trump’s latest rhetorical escalations. Although the language that the President has adopted over the past few days is entirely consistent with his 2016 campaign, the inflammatory statements he issued at rallies then were “on a micro scale” compared with what he is doing now on a national stage, Levitsky said. And the political environment, following months of protests against police racism and brutality, is even more incendiary. “We now have the potential in towns and cities across the country for pretty significant violence, with a large number of deaths,” he said. “Trump is either unaware of this or he doesn’t care. I don’t normally like to make these comparisons, but this sort of encouragement of violence for political purposes is worryingly similar to what the Fascist movement did in Europe during the nineteen-twenties and nineteen-thirties.”

Political scientists Thomas Mann and Norm Ornstein tried to warn us in 2012, Let’s just say it: The Republicans are the problem.

The GOP has become an insurgent outlier in American politics. It is ideologically extreme; scornful of compromise; unmoved by conventional understanding of facts, evidence and science; and dismissive of the legitimacy of its political opposition.

When one party moves this far from the mainstream, it makes it nearly impossible for the political system to deal constructively with the country’s challenges.

The Republican Supreme Court power grab after Justice Ruth Bader Ginsburg’s death should be shocking, given the naked hypocrisy involved. The only reason it isn’t is that we’ve come to expect this from Republicans — and not just under Trump.

This kind of radicalism is not at all normal — at least, when compared to center-right parties in other advanced democracies.

Experts on comparative politics say the GOP is an extremist outlier, no longer belonging in the same conversation with “normal” right-wing parties like Canada’s Conservative Party (CPC) or Germany’s Christian Democratic Party (CDU). Instead, it more closely resembles more extreme right parties — like Viktor Orbán’s Fidesz in Hungary or Recep Tayyip Erdogan’s AKP in Turkey — that have actively worked to dismantle democracy in their own countries.

The Supreme Court saga can’t be considered in isolation. It is symptomatic of a profound brokenness in American politics, one party dragging us away from the developed-world political standards we aspire to and towards a fight over the most basic of democratic principles: whether power should be shared. And that’s a disaster for American democracy.

“The only way we move forward is when Republicans reform, and cease to be an increasingly authoritarian white nationalist party,” says Steven Levitsky, a Harvard professor and the co-author (with Daniel Ziblatt) of How Democracies Die.

The Republican Party really is different

Levitsky’s views are not at all an outlier.

A 2019 survey of nearly 2,000 experts on political parties from around the world asked respondents to rate political parties on two axes: the extent to which they are committed to basic democratic principles and their commitment to protecting rights for ethnic minorities. The higher the number, the more anti-democratic and intolerant the party is.

The following chart shows the results of the survey for all political parties in the OECD, a group of wealthy democratic states, with the two major American parties highlighted in red. The GOP is an extreme outlier compared to mainstream conservative parties in other wealthy democracies, like Canada’s CPC or Germany’s CDU. 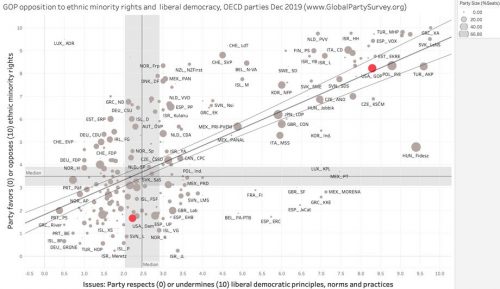 Its closest peers are, almost uniformly, radical right and anti-democratic parties. This includes Turkey’s AKP (a regime that is one of the world’s leading jailers of journalists), and Poland’s PiS (which has threatened dissenting judges with criminal punishment). Experts rate the GOP as substantially more hostile to minority rights than Hungary’s Fidesz, an authoritarian party that has made demonization of Muslim immigrants into a pillar of its official ideology.

In short, there is a consensus among comparative politics scholars that the Republican Party is one of the most anti-democratic political parties in the developed world. It is one of a handful of once-centrist parties that has, in recent years, taken a turn toward the extreme.

“The transformation of the GOP is in line with other transformations of conservative into far-right parties, like Fidesz in Hungary,” said Cas Mudde, an expert on right-wing politics at the University of Georgia.

Over the past decade and a half, Republicans have shown disdain for procedural fairness and a willingness to put the pursuit of power over democratic principles. They have implemented measures that make it harder for racial minorities to vote, render votes from Democratic-leaning constituencies irrelevant, and relentlessly blocked Democratic efforts to conduct normal functions of government.

According to Jennifer McCoy, a political scientist at Georgia State University, these measures follow common patterns seen among populist authoritarians who initially win power by electoral means. They tend to pass changes to the electoral system aimed at ensuring “one party dominates government” while also working to marginalize or control “accountability institutions” like the judiciary or oversight watchdogs.

“Many of these leaders are able to do so when they first win a clear majority and then begin to change rules or the constitution to further entrench their advantage and get to supermajorities,” McCoy tells me.

For Republicans, the process of moving toward anti-democracy has taken decades rather than a single election. There was never a single unified GOP plan to lock out Democrats, akin to the way that Fidesz intentionally remade the Hungarian political system after winning the country’s 2010 election. There is no authoritarian plot behind the GOP’s recent maneuvers, and no secret plan to end elections or declare martial law.

Or maybe not … see Part II.

What there is, instead, is systematic disinterest in behaving according to the democratic rules of the game. The GOP views the Democrats as so illegitimate and dangerous that they are willing to employ virtually any tactic that they can think of in order to entrench their own advantage. This is perhaps the party’s core animating ideology, at every level: we must win because the Democrats cannot be given power.

Republicans believe they ought to win elections, and are doing everything in the power to make that the case — including changing the rules to stack the playing field in the favor. The effect is a party committed to an anti-democratic creed outside the norm of advanced Western democracies that insists that it is the true guardian of American democracy.

Any effort to fix American politics needs to be clear-eyed on this point: The Republican Party is so beyond what’s normal in a healthy democracy that some kind of radical pro-democracy reform is required — be it ending the filibuster, court-packing, DC and Puerto Rico statehood, a new Voting Rights Act, or all of above — to try and turn things around.

“The Republicans pose too much of an authoritarian threat,” Harvard’s Levitsky tells me, “to simply go on with business as usual.”

Part II: Twilight of American Democracy – The GOP Plot To Steal The Election