The more things change, the more they stay the same. Daily Kos reports today, Pew confirms it: There’s no real such thing as an ‘independent’ voter:

Few things are more frustrating than people jabbering about what “independents” think, want, or believe. This idea that there are people today who truly swing between voting for Democrats and voting for Republicans doesn’t pass the anything test. Do you really know someone like this, an informed voter who regularly swings wildly between the two parties?

Yes, there are people who call themselves independent. They are the tea party conservatives, too cool to be Republicans, yet always pulling the lever for the GOP. There are the Bernie-type liberals, also too cool and pure to sully themselves by belonging to a party, yet when it comes time to vote, they wouldn’t vote for a Republican to save their lives.

And yes, there are “independents” who, generally, are too apathetic to care enough to realize that there are real differences between the two parties, and might swing. But that kind of person is also very likely to, you know, not vote at all.

And while this all sounds anecdotal, it’s not. It’s in the findings of the latest Pew Research study on so-called independents.

Top line? Only 7% of Americans are true independents—individuals who genuinely don’t lean toward either of the two major parties. And of those? Only 33% voted in 2018! That is, only 2.3% of real independents even bothered to vote!

So next time you see someone fretting about how this or that policy or message is selling to “independents,” remember that we’re talking about 2-3% of voters. If you’re worried about appealing to that crowd, as opposed to your core base, then you’re doing it wrong. Truly wrong. Really, really, really wrong.

And here is a post I did seven years ago in June 2012 that came to the same conclusion. Sorry media villagers, ‘independents’ are not nonpartisan or centrists:

Over the years I have posted about political science studies which demonstrate that “independent” voters are actually partisan “leaners.”

Data from the American National Election Study analyzed by political science professor Alan I. Abramowitz of Emory University showed that in 2008, independents made up 40 percent of eligible voters, but only 33 percent of those who actually voted. Only 7 percent of the total voted as true independents with no party preference. The other indies were clearly “leaners” for one party or the other. ‘Swing’ voters remain partisan – Chicago Tribune.

Don’t bother telling the media villagers this. They are committed to their “independent voters are nonpartisan” and “centrists” (or “moderates”) meme, the facts be damned.

A case in point is this headline from the Arizona Republic on Tuesday about the new Pew Research Center study, Political independents outweigh partisans, poll says. Once again, independents are partisan “leaners.”

Here are a couple graphs for the next time you hear that the “independents are the largest group of American voters” and some species of “to appeal to this vast number of independents you have to take moderate positions.”  Graphs are courtesy of the new Pew Center report (p.28 and 98 of the pdf):

First, most independents lean toward a party:

You can see that only 12% of respondents did not identify with or lean toward a party in the most recent survey.

Second, independents who lean toward a party have not differed much from partisans on key political values: 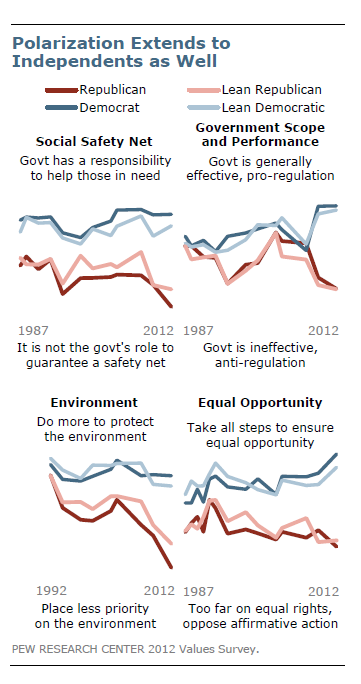 I’m sorry to repeat myself, but it seems to be necessary.

The Pew Research Center study is actually titled “Partisan Polarization Surges in Bush, Obama Years.” Media villagers should maybe, you know, actually read the report. Is that too much to ask? There is lots of good info in the report.

There has been a consistent 7% of Americans who are true independents, and only 33 percent of those who actually vote, for years. The media consistently puts this 2.3% of real independents who even bother to vote up on a pedestal and pretend as if they decide elections. They do not.

Elections are decided by base voter turnout — party partisans and “leaners” who call themselves independents.