Please make this the last election with an Iowa Caucus

Please make this the last election with an Iowa Caucus

For those of us who come from states that border on Iowa, there is a familiar old joke that goes I.O.W.A. is just an acronym for “idiots out wandering around.” You should keep this in mind because tonight’s Iowa Caucuses Are a Democracy Disaster, as Clint Hendler explains at Mother Jones.

Even The Gazette newspaper of Iowa published an op-ed from a staff columnist last November calling on Democrats to Abolish the undemocratic Iowa caucuses – a heresy in the all too self-important state of Iowa, which has turned its caucuses into a money making cottage industry for political consultants and local media and advertising agencies.

There is so much breathless reporting from the horde of campaign trail reporters covering the Iowa Caucuses today and in recent weeks. This is all about media narrative construction. Every four years these damn fools try to tell Americans that Iowa is predictive of who the party nominees will be and anoint the “winner” with front-runner status and “big mo” (momentum), wasting tons of ink and pixels to fill column space and air time.

Even worse, with a large field of candidates and fewer than 200,000 voters actually participating, the “winner” can win by a margin of just a few thousand or even just a few hundred votes. There is typically the same slim margin between first through fourth place finishers. So how do these campaign trail reporters get off anointing the “winner” of the Iowa Caucus with national front-runner status and “big mo”? Who are they to decide?

Pew Research gives these campaign trail reporters a reality check. What to know about the Iowa caucuses (excerpt):

Iowa’s Democratic caucuses are open only to registered party members, not unaffiliated voters or those registered as Republicans or with other parties. However, people can register or change their party affiliation on caucus night if they want to participate.

How many people turn out for the caucuses?

For a long time, that was a surprisingly difficult question to answer. Until recently, the parties didn’t report attendance figures, only “state delegate equivalents,” using complex formulas to translate the caucus-night results into state convention delegates. Individual precincts didn’t always keep close counts of how many people caucused, or if anyone left early. Add in that 17-year-olds can caucus if they’ll turn 18 by Election Day, and the difficulties in reliably calculating turnout become clear.

Notwithstanding all that, the Iowa Caucus Project of Drake University estimated that in the 2004 Democratic caucuses and the 2008 and 2012 Republican caucuses, roughly 20% of registered party members participated. In the 2008 Democratic caucus, nearly 40% of eligible Democrats took part. 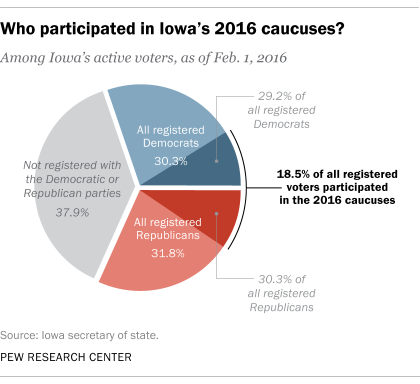 How will we know who wins?

This year, the Iowa Democratic Party will report three sets of caucus results: the initial count of candidate support (called the “first alignment”), the final alignment (after backers of “nonviable” candidates have had a chance to shift their support to someone else), and state delegate equivalents. That means that theoretically, three different candidates may be able to plausibly claim to have “won” the caucus.

How reliably do the Iowa caucuses predict the ultimate nominee?

Like so much else with the caucuses, that depends on how you look at it. Since 1972, there have been 10 contested Democratic caucuses; in six of them, including the four most recent, the declared caucus winner ultimately was nominated. On the Republican side, there have been eight contested caucuses in that span, but in only three cases was the caucus winner ultimately the nominee. 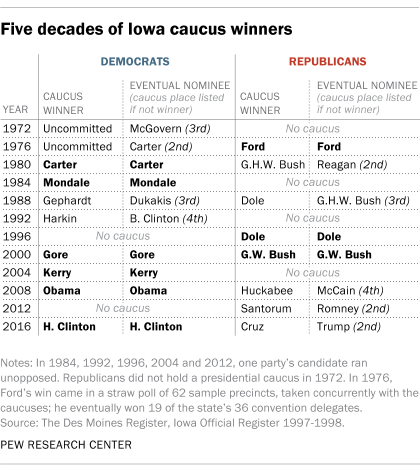 For many years, there’s been a saying among caucus-watchers that “there are only three tickets out of Iowa.” That refers to the fact that since 1972 (and excluding years when incumbent presidents ran unopposed for renomination), the eventual nominee has nearly always been one of the top three finishers in the caucuses. The exceptions were Bill Clinton, who placed fourth in 1992, and John McCain, who came in fourth in 2008. Both of those were special cases, though: In 1992 Iowa’s own Sen. Tom Harkin was the overwhelming caucus favorite, so the other Democratic contenders mostly ignored the state. And McCain was just 424 votes behind third-place finisher Fred Thompson.

How many other states and territories use caucuses?

Not as many as used to. This year, besides Iowa, only two other states (Nevada and Wyoming) and four U.S. territories will pick their Democratic convention delegates through caucuses, 11 fewer states than in 2016.

So tell me why we are doing this again? We are a fifth of the way into the 21st Century and yet we are still using an antiquated anachronism from the late 20th Century to select presidential candidates? Please make this the last election with an Iowa Caucus.

How does Iowa compare demographically with the U.S. as a whole?

Many observers and pundits say that Iowa’s de facto gatekeeper role is unfair because it is in many ways so unlike the United States as a whole (although others argue that, depending on which metric you use, the state is more representative than it’s often given credit for being).

Despite the acres upon acres of corn and soybean fields you may have seen on TV, only 3.3% of employed Iowans work in agriculture and related industries. That’s still more than double the share among all Americans (1.3%). Around one-in-six employed Iowans (15.1%) work in manufacturing, compared with 10% in the nation as a whole. In 2018, 7.2% of Iowa families had incomes below the poverty level, versus 9.3% of all U.S. families.

In terms of educational attainment, 29% of Iowans ages 25 and older have a bachelor’s degree or more, compared with 32.6% among all Americans in that age range.

Despite all this, the horde of campaign trail reporters covering the Iowa Caucuses are going to report tonight and in the coming days ahead that Iowa is predictive of who the party nominees will be and will anoint the “winner” — or winners — with front-runner status and “big mo,” just as they do every four years, and they will be wrong. And again, who are they to decide?

UPDATE: This is an example of what I mean, NBC’s Chuck Todd and host of Meet The Press, at First Read: “No one has more at stake tonight than Joe Biden. A first-place finish in the Iowa caucuses here could put him the driver’s seat to win the Democratic nomination; a fourth-place finish could end his political career.” How does this guy keep his job?

The primary contests that really matter are not until “Super Tuesday” in March. Iowa means very little. These campaign reporters and pundits are just trying to justify their paychecks by throwing out buckets of chum into the campaign waters until Super Tuesday when things get real.