Update to Time to vet the applicants for the Independent Redistricting Commission.

The Arizona Mirror today follows up on the political party redistricting organizations already lining up to do battle next year. Partisan groups laying the groundwork to shape Arizona redistricting (excerpts):

[10 years ago] FAIR Trust, a collection of Republican lawyers and others who worked with Republicans in Arizona’s congressional delegation, testified frequently at the AIRC in 2011, but ultimately had little influence on the final maps.

Blog for Arizona covered FAIR Trust and the redistricting process in depth at the time.

This time around, there are at least two GOP groups that are looking to get out ahead of the issue.

“Our focus will be to make sure Republican voices are heard throughout the process. And that’s really going to be our focus throughout,” said Brian Murray, a longtime GOP consultant who is working with Fair Lines Arizona.

The group was founded last year and has already hired a data consultant and legal counsel. But Murray said it’s stayed out of the application and recruitment process, and won’t try to influence the selection of finalists from among the 138 applicants. Instead, the group will be active once the commission begins its actual work of drawing maps. For now, it’s largely on hiatus due to the COVID-19 outbreak, as well as the upcoming election.

Murray, who was heavily involved in the first redistricting commission in 2001-02 as the executive director of the Arizona Republican Party, said Fair Lines Arizona will follow the same playbook that the GOP used 20 years ago: use the six redistricting criteria in the Arizona Constitution to get maps that “represent the people of Arizona as constitutionally as possible.”

Ultimately, Murray said his group wants maps that are fair and adhere to the constitution.

“What happened last time is you had a lot of districts where you had Republicans massively packed into a bunch of districts, and it was probably unconstitutional,” Murray said. “It’s incumbent upon us to show the commission, hey, here’s how you can comply with the constitution and it’s your constitutional duty to do so. We’re simply just going to provide facts to them.”

When the last AIRC’s maps were finalized in 2012, Republicans challenged the constitutionality of both the congressional and legislative districts. The courts ultimately rejected those challenges and upheld the maps.

Fair Lines Arizona has also been in communication with Republican members of Arizona’s congressional delegation and will be working with them moving forward. Murray said he spoke with GOP legislative leadership about the effort last year, but that the coronavirus has put things on hold.

Fair Lines Arizona isn’t the only group formed to represent Republican interests in the redistricting process. Steve Gaynor, a businessman who was the Republican nominee for secretary of state in 2018, created the similarly named Fair Maps Arizona last year, which he runs with former GOP lawmaker Jill Norgaard.

Gaynor would not comment on Fair Maps Arizona’s activities, but he told the Arizona Mirror last year that his organization could play a number of roles, including recruiting and vetting candidates for the IRC, testify or lobby the commission on the boundaries of congressional and legislative districts, or perhaps even draw maps itself.

Hence the need to vet those “independent” applicants for the Commission. There are almost certainly Republican “Trojan horses” among the applicants.

At least three of the independent applicants said they received automated calls or text messages from Fair Maps Arizona. Two of those independents decided to apply after receiving automated text messages from Gaynor stating, “We need more independent applicants, so I’m hoping you or someone you know may want to serve and help us get fair maps.” Another said he was planning on applying and realized the deadline was about to pass thanks to an automated call from Gaynor’s group.

Lines and Murray said they believe their group and Gaynor’s group can work together and avoid stepping on each other’s toes.

“The hope is that, if there is more than one group, that people would coalesce and work together so that there weren’t competing interests within the party,” Lines said.

The Arizona Republican Party has also spread the word about the application process and recruited Republicans to apply, as well as independents and Democrats, according to spokesman Zach Henry. But it’s largely deferring to the outside groups.

“We’re not critically involved with the process. We’re letting other satellite groups take care of that,” Henry said.

Several Republicans say Gov. Doug Ducey and members of his outside political operation have played a role in recruiting candidates for the AIRC. However, Ducey said he hasn’t directed anyone to recruit candidates or take other steps to influence the redistricting process.

“I know that there have been people that have been working to find folks that are willing to do this,” Ducey said during an Aug. 20 press conference. “But it’s not something that I’ve been personally focused on.”

Ducey’s former chief of staff, Kirk Adams, and Sara Mueller, who runs the governor’s political operation, did not respond to multiple messages from the Mirror to discuss redistricting.

The governor’s greatest contribution to the Republicans’ redistricting efforts may have been finished before the Commission on Appellate Court Appointments even began accepting applications. The governor denuded [rigged] the commission of Democratic members, leaving it with only Republican and independent members, some of whom had clear GOP ties, for more than a year. Democrats vociferously criticized Ducey for the commission’s lack of political diversity, as well for the lack of racial and ethnic diversity, as it included very few non-white members.

A handful of gubernatorial appointments in July added three Democrats and left the appellate commission with three non-white members instead of just one. But that still leaves Democrats outnumbered by both Republicans and independents as the 15-member commission prepares to vet redistricting applicants and decide which of the 138 candidates make the final list of 25.

While the Arizona Mirror doesn’t include it in its reporting, I told you in an earlier post about the national Republican Party redistricting organization for the next round of redistricting (excerpt): 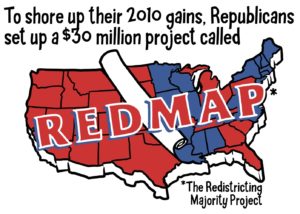 This year’s election is critically important for the control of Congress, state legislatures and governorships because this is a census year, and next year begins the redistricting process. It is an opportunity for Democrats nationally to reverse the horrific gerrymandering of congressional and legislative districts by the Republican Party’s REDMAP (Redistricting Majority Project) after the disastrous 2010 “Tea Party” midterm election. ‘Gerrymandering On Steroids’: How Republicans Stacked The Nation’s Statehouses.

Following its unprecedented success in the last redistricting cycle in 2010, the Republican State Leadership Committee (RSLC) announced the launch of its major redistricting initiative, Right Lines 2020 last year. RSLC Launches Major Redistricting Initiative for 2019-2020 Election Cycle. The RSLC is hoping to meet a $125 million investment goal to get Republicans elected in down-ballot races. ‘This is a war’: Republicans ramp up bid to control election maps for next decade.

For Democrats, the DLCC is launching a $50 million “Flip Everything” campaign in preparation for the redistricting fight in key state legislative races. Democrats prepare to spend big to take control of 2021 redistricting. (Guys, that’s a $75 million advantage to the GOP).

Remember that the conservative Roberts Supreme Court last year essentially green-lighted partisan redistricting in Rucho v. Common Cause, holding that “Partisan gerrymandering claims present political questions beyond the reach of the federal courts.” So the courts are not coming to our aid.

On the other side of the aisle, the Arizona Democratic Party is taking the lead. Chairwoman Felecia Rotellini said the state party has held information sessions to get the word out to potential Democratic applicants for the commission, though she said it hasn’t taken any steps to recruit independents.

For now, the party is keeping a close eye on the vetting process for the redistricting applicants, and Rotellini said it will assist Democratic leaders in the House and Senate as they make decisions on who to appoint to the AIRC.

Once the actual mapmaking begins, Rotellini said the party will focus on ensuring that the AIRC draws as many competitive districts as possible.

“The most important thing is we are working towards competitive districts, not gerrymandered districts that really take … the power of the vote away from people. We’ll be watching closely, and to the extent we can be involved, we will be,” she said.

National Democratic forces are also working on redistricting in Arizona.

All On The Line, an anti-gerrymandering campaign organized by the National Democratic Redistricting Fund, has been active in Arizona, one of 10 states where the group has set up operations. The organization was the result of a merger between organizations founded by President Barack Obama and his attorney general, Eric Holder.

In states like Arizona that use independent commissions for redistricting, Holder has said his group will train people to advocate for fair maps.

In Arizona, All On The Line has focused on encouraging grassroots participation at the redistricting commission, said Kendra Alvarez, the group’s state director. It has hosted numerous sessions aimed at providing information about the redistricting process, and has partnered with the Arizona Democratic Party on some of them. The group has also sought to recruit AIRC applicants through its information sessions, emails and social media.

Alvarez said All On The Line isn’t trying to be “the redistricting arm just for Democrats,” and wanted to ensure that good people applied for the commission. But she acknowledged that the group’s mailing list consists mostly of Democrats and independents, and that’s who its outreach has largely focused on.

All On The Line will work throughout the redistricting process to encourage and help members of the public to participate, including preparing people for public testimony that could influence the AIRC’s decisions.

“That’s really our focus is how do we mobilize more folks that haven’t been traditionally involved in this, and how do we give them the tools to think about what they need their districts to look like,” Alvarez said.

Alvarez said All On The Line is also committed to doing everything possible when it comes to “supporting communities that have been underrepresented.”

The Commission on Appellate Court Appointments will meet on Sept. 17 to review applications and take public testimony on the candidates. People can also submit public comments regarding the applicants via email at jnc@courts.az.gov, or by mailing them to the commission’s offices. Comments cannot be submitted anonymously.

By early January, the Commission on Appellate Court Appointments will narrow the list of applicants down to 25 people.