Pope Francis to host conference on climate change on Tuesday

Pope Francis to host conference on climate change on Tuesday 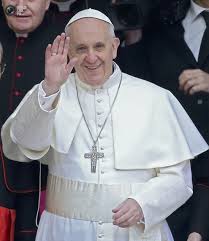 The conference will feature famous American economist, Jeffrey Sachs, who is the director of the Earth Institute at Columbia University. The U.N. Secretary General, Ban Ki-Moon, will be giving the opening address. The world’s leading climate scientists are expected to attend the conference on climate change, together with participants from major world religions, as they aim to elevate the debate on the moral dimensions of protecting the environment in advance of the papal encyclical.

Pope Francis’ attendance is just one of his many goals in advocating environmental conservation. He has been very vocal about his support to helping out solve environmental issues. According to the Pope, acting on climate change is essential to faith. He describes destruction of nature as “a modern sin.”

Cardinal Peter Turkson of Ghana will also be speaking at the summit. He is a top Vatican official leading the drafting process of the Pope’s encyclical on the environment (which will be released this summer.)

According to the Vatican, the summit will be highlighting the intrinsic connection between respect for the environment and respect for people. This focuses especially on the excluded, the poor, the children and future generations, and the human trafficking and modern slavery victims. The one-day conference is expected to help create a global movement across all religions for sustainable development and climate change for 2015 and beyond.

After Pope Francis expressed disappointment with the Lima climate talks, he promised to increase pressure on world leaders. He hopes to influence the climate talks happening at the end of the year in Paris, through his encyclical.

The largely secular climate movement is about to get what some predict will be a historic boost from an intriguing source: Pope Francis.

Francis is putting the final touches on what may be the most authoritative papal teaching ever on the environment, a topic bound up with economics, global development and politics and thus very controversial. Even though no one outside Francis’s inner circle has seen the document — called an encyclical — it’s already being lambasted by some religious and political conservatives and held up by environmentalists as a potential turning point in their movement.

The encyclical is expected to be published in early summer and, church historians say, represents the first time in memory that such an important papal writing is being timed by a pope to influence a civil process — in this case, a major U.N. summit in December on climate change.

Based on remarks and writings by the pope and his close advisers, most pope-watchers think Francis will raise urgent concerns about global warming and highlight human impact on climate change. More broadly, they expect Francis to frame with new emphasis the Earth’s health as a core Catholic social justice concern, up there with topics such as poverty and abortion.

Global inequality and the destruction of the environment “are the greatest threats we face as a human family today,” Cardinal Peter Turkson, a Vatican official who helped write the first draft of the encyclical, said in a March lecture seen as a preview of the document. The pope, Turkson said, “is not making some political comment about the relative merits of capitalism and communism. . . . he is pointing to the ominous signs in nature that suggest that humanity may now have tilled too much and kept too little. ”

After decades of secular campaigns that failed to move the needle significantly, environmentalists are optimistic about the potential of having religious groups more fully on board in combatting global warming. They have spent years courting skeptical evangelicals, many of whom have begun using the term “creation care.”

“This has the outreach potential that nothing else has had,” said Mary Evelyn Tucker, co-director of the Forum on Religion and Ecology at Yale University, one of the biggest in a cluster of new groups aimed at connecting faith communities with environmental concerns.

The environmental movement, Tucker said, has been until now largely focused on finding secular solutions in law, science and politics – not ethics and religion. “This is a new moment, when scientists, lawyers and policy people are saying: We need this moral transformation.”

Environmentalism and global warming are not new topics for the Catholic Church. Church leaders — including Pope Benedict — in the last couple decades have been slowly connecting the environmental, moral and economic costs of globalization. However, these connections have never been put forth fully in an encyclical, considered uniquely authoritative in Catholicism.

How strongly will he make the case that humans are causing global warming – a case that many Republicans and many conservative Christians don’t buy, think is dangerous to the free market and don’t think a priest – even a pope – is qualified to make? And will he break new theological ground in how he frames care for the environment – describing it not only as a means of helping man (who Genesis says God meant to have “dominion” over other living things) but with value independent of humans?

Also unknown is how, specifically, Francis will urge his church to respond. Will bishops be expected to prioritize the topic in their investments, political efforts, sermons?

Indeed, Catholicism has a big stake in this encyclical. Such documents are considered among the most authoritative teachings of the church, but in recent decades Catholics regularly blow off their mandates on topics like contraception and divorce. Francis’s writing will push the question: How much influence can even this pope have on modern behavior — Catholic and otherwise?

He will frame environmental concerns other popes have voiced in recent decades in an extremely focused way: how they impact the poor. This could include references to the ways in which woes like poor water quality and weather disasters disproportionately harm the world’s poor. And, Peppard predicted, he may take existing church teaching on the environment, which has always been focused on “effects on the human and the dignity of the human” and possibly posit that the environment “is a gift from God, and that humans have duties to creation as such, not just in light of human concerns.”

These are the areas that have the potential for controversy – how strongly he links human behavior to climate change and whether he sets forth an idea of creation that doesn’t have humans alone at the center.

Chad Pecknold, a theologian at Catholic University, predicted Francis will do neither, particularly the former.

“The moment he would make a strong scientific claim about humans’ role, those Catholics who would dissent from that view would have a claim within the tradition to say the pope has overstepped his bounds,” which would squander a chance to broaden how believers think about the environment, Pecknold said.

He believes Francis will characterize “the human role” in global warming in Biblical terms: That our disconnect with the environment began with Adam and Eve, and the “turning away from our dependence on the order of Creation.” That turning away would include divorce, gay marriage, “and most especially abortion and euthanasia as evidence of a ‘throwaway culture,’” Pecknold said, using a term Francis often says about everything from treatment of the elderly to addicts.

However given Turkson’s and Francis’s previous comments about the human impact on climate change, it seems likely the pope will prescribe both policy and spiritual remedies.

Robert Nelson, a University of Maryland economist who focuses on environmentalism and religion, predicted the encyclical “will go over well everywhere except with Republicans.” However, he said, a group that often talks about ethics being too absent from public life could find themselves tempted by a pope putting care for creation back into a traditional framework.

Anthony Annett is a climate change advisor and Catholic writer brought on to the prominent Earth Institute at Columbia University to help bridge the gap between environmentalists and religious communities. Considering Francis chose to name his papacy after the patron saint of animals and the environment and is the most retweeted person on the planet, expectations among environmentalists are soaring.

“I’ve never seen such buzz about a papal document in my life,” he said. “There are a lot of expectations about a document no one has actually seen. And with Francis, expect the unexpected.”