The inflection point in the George W. Bush administration was not his disastrous Iraq War, but his administration’s apparent indifference and clusterfuck handling of the aftermath of Hurricane Katrina “When The Levees Broke” (Parts I & II and Parts III & IV) in New Orleans.

History may be about to repeat itself.

A State Department intelligence analyst has resigned in protest after the White House blocked his discussion of climate science in Congressional testimony, according to a person familiar with the matter.

Rod Schoonover, an analyst with the State Department’s Bureau of Intelligence and Research, testified last month before the House Permanent Select Committee on Intelligence on the effects of climate change on national security. But, in a highly unusual move, the White House refused to approve Dr. Schoonover’s written testimony for entry into the permanent Congressional record.

The reasoning, according to a June 4 email reviewed by The New York Times, was that the science cited in Dr. Schoonover’s testimony did not correspond with White House views. Ultimately, Dr. Schoonover did deliver the oral testimony before the committee, but his accompanying written statement was not included in the official record of the hearing.

Dr. Schoonover did not respond to text message requesting comment. A policy expert familiar with his case confirmed that his resignation came as a direct result of the episode. His last day is expected to be Friday.

Donald Trump can deny climate change and try to bury the climate science all he wants, but as Credence Clearwater Revival lamented, Who’ll Stop The Rain? There is another portending disaster headed for New Orleans this weekend, tropical storm Barry. And Trump can’t stop the rain. This may become “Trumps Katrina.”

A flash flood emergency was declared for New Orleans Wednesday morning when six to 10 inches of rain engulfed the city, much of it falling over the course of an hour or two.

The deluge may have just been a preview of more serious flooding situation from Tropical Storm or Hurricane Barry, which could affect the area into the weekend.

Due to the effects of Barry, the Mississippi River is projected to see one of its highest crests on record in New Orleans Saturday, or the highest since the 1920s. The National Weather Service projects the river to crest at 20 feet, which is at the same height levees protect the city. The storm surge, or rise in ocean water above normally dry land when Barry comes ashore, could push several feet of ocean water up the mouth of the Mississippi River, elevating the river level to these record-challenging heights.

Due to a historic spring flood season in central U.S., the Mississippi River level at New Orleans of 16 feet is already high, just a foot below flood stage. The projected surge of 3 to 5 feet from Barry would raise its level to 19 to 22 feet. The river hits moderate flood stage at 19 feet and major flood stage at 20 feet (when the levees are tested) while 21.3 feet is the highest level ever recorded from 1922.

Because of the surge and resulting flood potential, New Orleans is already under a storm surge watch.

The flooding along the Mississippi could be compounded by heavy rainfall associated with Barry, which hit suddenly Wednesday morning before the storm had even formed. As the torrent raged, city officials advised commuters to stay off the roads because of numerous high water incidents. Many businesses and parts of the city government closed. 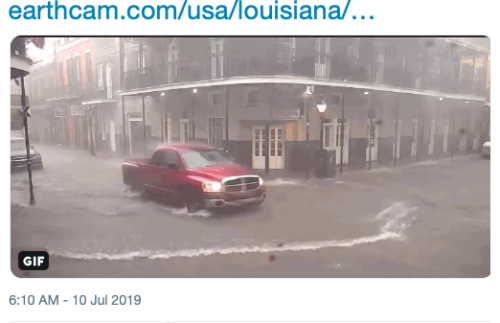 Flooding caused street closures and water rescues in dozens of spots. The heavy rain that created the flooding in New Orleans later tracked to the southwest, prompting an additional flash flood emergency for Jefferson Parish.

Rainfall rates as high as six inches per hour were noted near the iconic French Quarter. Many locations in and around downtown New Orleans picked up totals of over half a foot. 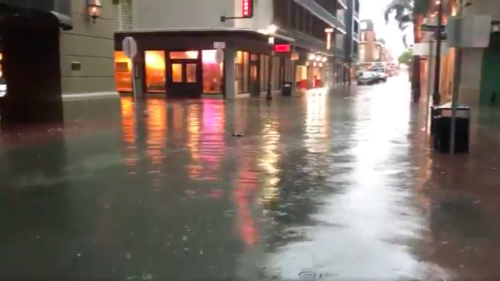 Above: Dauphine Street under about 3-4 feet of water after a couple hours of heavy rain.

Before the flash flood emergency was issued for the city, a tornado warning was in effect and waterspouts were photographed over Lake Pontchartrain.

While the rains have eased for now in New Orleans, forecasts project Barry to strike the coast of Louisiana or northeast Texas this weekend. Depending on where it makes landfall, Wednesday morning’s torrent could be just the beginning of flooding problems in and around New Orleans.

Excessive amounts of rain could fall, or just a moderate amount. If Barry tracks well west of New Orleans, close to the border of Louisiana and Texas, the flood risk would decrease. But a track closer to the city could pose a severe flood threat, both from rain and storm surge.

The outlook from the National Weather Service calls for about eight inches of rain in New Orleans over coming days. Forecasts project over a foot of rain could fall in central and western Louisiana, but some shifts in these projections are possible. 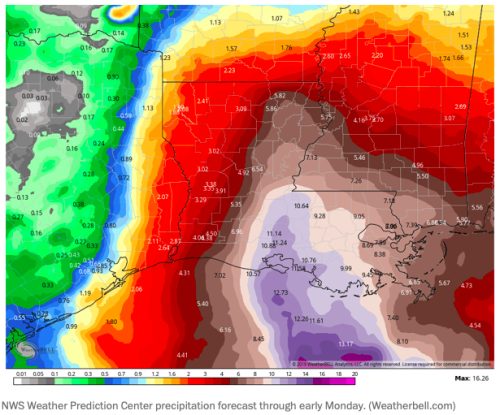 Because the Mississippi River is already so high, even small amounts of additional water from rain and surge will cause problems. In Baton Rouge, the Mississippi has remained at flood stage since early January, a record-long duration.

The region is likely to deal with the storm and its associated effects through at least early next week, when it should get kicked away. Flood concerns, both from rainfall and storm surge, will remain high through then.

We’ll see how well the Trump administration responds to this portending disaster.