One of the nation’s most prominent law firms — Paul Weiss, Rifkin, Wharton, and Garrison — filed a lawsuit on behalf of the historic Washington, DC. Church – the Metropolitan African Methodist Episcopal Church — as Vice President Mike Pence prepares to count the electoral votes on Wednesday.

The suit, filed on January 4, alleges Trump’s Proud Boys vandalized the church, tearing down its “Black Lives Matter” flag. The right-wing militia is an all-male group with ties to white nationalism and a pronounced history of violence.

“The conduct of the Proud Boys in Washington, D.C. on December 12, 2020, amounted to a new and dangerous chapter in the long and terrible history of white supremacist mob violence targeting Black houses of worship,” the complaint says.

The lawsuit charges the terrorist group with a bias-related crime, theft, trespassing, intentional damages of religious property. It seeks compensatory and punitive damages.

The Proud Boys plan to descend on Washington, DC, and hold another rally on Wednesday.

Monday’s complaint says a replacement “Black Lives Matter” sign will hang in front of Metropolitan Episcopal Church by Wednesday, January 6, the day of the planned protests, “making the church once again a highly visible target for violence.” 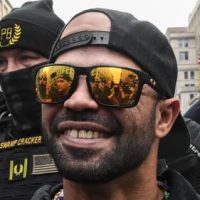 Enrique Tarrio was arrested for vandalism

The suit also names the group’s chairman, Enrique Tarrio of Miami, FL, for tearing down the “Black Lives Matter” flag and signs at both Metropolitan AME Church and other black churches in Washington, D.C. He was arrested on Jan. 4 for vandalism.

The complaint cites Tarrio’s vandalism and “claiming credit” for the vandalism of Black Lives Matter signs at Black churches in D.C

It also alleges that, on December 12, the AME church, “like other nearby churches showing support for the ‘Black Lives Matter’ movement, was terrorized through coordinated acts of violence when Proud Boys members climbed over a fence surrounding the church, came on to the church’s property and destroyed a large ‘Black Lives Matter’ sign the church was proudly displaying—attempting to silence the church’s support for the racial justice movement with violent acts of trespass, theft, and destruction of property.

“Proud Boys have frequently sought out, encouraged, and engaged in bias-motivated street violence,” the complaint states.

The lawsuit asks a judge to find Proud Boys members “committed crimes that were motivated by bias under the D.C. Bias-Related Crime Act.”

The suit alleges that another black church in the city, Asbury United Methodist Church, was also vandalized during the night of December 12.

“During a time of year that is meant to be joyous and restful, the congregants, staff, and church leadership instead had to endure and respond to a hate crime,” the lawsuit states.

Tarrio, the chairman of the terrorist group, said he was “damn proud” of the actions targeting the ‘Black Lives Matter’ movement, according to the complaint. 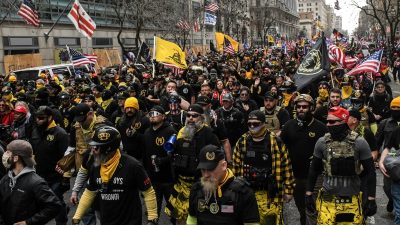 The D.C. National Guard is standing by to quash the rebellion, and Washington, D.C., Mayor Muriel Bowser, has called for residents to stay home and not fight the Proud Boys and other far-right groups expected to descend on

According to the lawsuit, Proud Boy leaders told their rank and file to “buy ammo [and] clean your guns.” One Proud Boy wrote that “tonight we keep our enemies awake, tonight we become nightmares.”

“Let me make this simple,” Tarrio told the Washington Post last month. “I did it.”

President Obama worshipped as a congregant at the church after the January 8, 2011, mass shooting of Congresswoman Gabby Giffords and six others during a meeting held in a supermarket in Tucson.