Back in December I posted about a New report on automation and AI replacing human labor.

The New York Times editorialized in February that No, Robots Aren’t Killing the American Dream. As evidence, the Times cites “the data indicate that today’s fear of robots is outpacing the actual advance of robots. If automation were rapidly accelerating, labor productivity and capital investment would also be surging as fewer workers and more technology did the work. But labor productivity and capital investment have actually decelerated in the 2000s.”

Sarah Bauerle Danzman, assistant professor of international studies at the School of Global and International Studies at Indiana University Bloomington, and Jeff D. Colgan, the Richard Holbrooke associate professor of political science at the Watson Institute of Brown University, respond today at the Washington Post. Robots aren’t killing the American Dream. Neither is trade. This is the problem.

Unfortunately, [the Times‘] argument leads many people to conclude that globalization and liberalized international trade must be what’s hurting U.S. manufacturing. That’s the argument that Alan Tonelson, a campaign adviser to both Donald Trump and Sen. Bernie Sanders (I-Vt.), made in a more recent Times op-ed. According to Tonelson, the U.S. economy needs protectionist policies to revitalize it.

But they’re wrong. Worse, those arguments distract us from implementing the policies that could most help the American worker. Here’s why.

The U.S. economy has steadily lost manufacturing jobs since the late 1970s. In 1970, manufacturing employed close to 25 percent of the workforce; but today employs only about 8.5 percent of working Americans. At the same time, the real median household income for people with high school diplomas but not college degrees fell 27.8 percent.

One key piece of evidence is that the United States shed 5 million manufacturing jobs from 2000-2014, even as output over the same period rose. That suggests that automation is the primary reason for the loss. If international trade were the chief culprit, we would also expect U.S. manufacturing output to decline.

2) Don’t scapegoat global trade for what automation has done

It does seem that automation has combined with international trade, particularly trade with China, to drive down employment and wages in industries that have traditionally competed with imports. Household goods and electronics are prime examples. That’s what economist David Autor and co-authors have shown, though their study was recently critiqued. The combination of these two trends has seriously hurt some local economies, mostly in the middle of the country.

But that doesn’t mean that international trade saps the U.S. economy overall. The U.S. economy is dynamic. Although rural and exurban areas have lost jobs to automation and trade, other places have boomed for precisely the same reason.

Protectionist trade policy would very likely cause more harm than good. In the United States, well-paying manufacturing jobs depend on an open global economy. Generally, firms can only expand their payrolls if they also can increase sales — which means selling overseas. If the United States restricted trade with import tariffs, other countries would retaliate by raising tariffs on American-made goods. As a result, manufacturers would have a harder time selling to 80 percent of the world’s global markets, those that lie beyond U.S. borders.

Also, U.S. manufacturing relies on importing components made abroad. Bilateral trade deficits with China are misleading. A great deal of the advanced technology that U.S. companies import is used to manufacture still more complex goods that will then be sold in the United States or beyond. For instance, Boeing’s 787 Dreamliner is assembled in Washington state and South Carolina from parts produced in at least nine different countries.

Certainly, the nation’s trade system could be better managed. Research shows that U.S. foreign economic policy is designed by and for business elites. The average voter’s concerns get little weight. But closing up trade is not the answer.

Consider Indiana, where almost 20 percent of Hoosiers work in manufacturing; that is the highest percentage of manufacturing jobs in the United States. More than 10 percent of those jobs, or about 63,000, depend directly on trade. So do an additional 750,000 jobs that aren’t in manufacturing. So lots of employment in Indiana, like most states, is directly tied to global markets, and even more is indirectly linked.

Further, recent research by Julia Gray and Philip B.K. Potter finds that when countries are fully integrated into international trade networks, their workers are actually less vulnerable to job loss than those on the global economy’s margins.

The challenge facing the United States isn’t that globalization hurts its economy. Rather, the problem is that the gains and losses from trade and automation are unevenly distributed among the economic classes. And as Harvard’s Jeffry A. Frieden points out, public policy has done little to address this problem.

The United States has an increasingly bifurcated labor market. High-skill, high-wage jobs go mainly to the coasts and to certain inland cities, as you can see on this map. Meanwhile, good jobs are leaving rural areas, replaced with low-skill, low-wage, unstable employment. 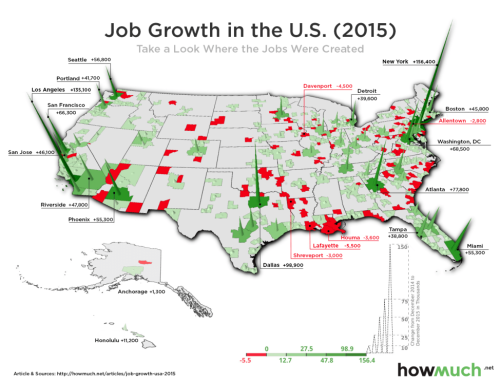 Restoring economic health to parts of the United States that are being left behind will require policies that can address three key questions. First, how do we raise wages when “good” jobs are being replaced by machines? Second, how do we make it easier to afford the education and technical training workers will need in a knowledge-based economy? And third, how do we fix the uneven distribution of job growth between urban and rural areas?

These are intensely challenging problems. To fix them, the United States needs serious debate and strong leadership. The right ideas are crucial for policymaking, as scholars such as Kathleen McNamara and Judith Goldstein show. Ken Scheve’s work on redistributing the gains from trade deals offers a good general strategy. One thing is for sure: Viable solutions will not emerge from merely blaming technological progress and international trade.

As I said in December, “More and more I see news articles appearing on this topic, but our political leaders appear to be entirely unaware, uninformed and unconcerned about rapid advances in technology replacing human labor. They do not even talk about this subject, let alone offer any plans or policies to deal with the economic disruption caused by rapidly advancing technology.”

This discussion is occurring almost entirely in academia and in the media. Our political leaders offer only bumper sticker slogans grounded in their political ideology. They have no answers for the economic disruption caused by rapidly advancing technology, nor are they seeking answers grounded in sound public policy.