The Washington Post’s conservative columnist Max Boot asks the questions to which Americans should demand an answer:

What is it with Trump and Russia? Why is the “America first” president so eager to cater to the anti-American dictator of Russia? That is the central mystery of the Trump administration. Almost every day, there are fresh signs of Trump’s subservience to Putin.

Donald Trump did not care that Russia illegally annexed Crimea and invaded eastern Ukraine in 2014, the first military invasion of a European country since World War II.

Donald Trump said he didn’t believe there was enough evidence to blame pro-Russian separatists for the downing of Malaysia Airlines Flight 17 over Ukraine in 2014: “Putin and Russia say they didn’t do it, the other side said they did, no one really knows who did it, probably Putin knows who did it. Possibly it was Russia but they are totally denying it.”

The 2016 Trump campaign solicited, coordinated with, cooperated with, encouraged, and gave support to the Russia/WikiLeaks election interference activities, according to the evidence in the Mueller Report.

At the Helsinki Summit in 2018, Donald Trump rejected the unanimous conclusion of the U.S. intelligence community that Russia interfered in the 2016 election to assist his election, and instead sided with Putin. “I have president Putin, he just said it’s not Russia. I will say this. I don’t see any reason why it would be.”

Donald Trump supported Russia’s intervention in its puppet regime, Syria, to aid its murderous strongman Bashar al-Assad, whom the U.S. had wanted removed from power.

Donald Trump ordered the withdrawal of American troops from Syria to abandon our Kurdish allies, who had rolled up the Isis caliphate, and allowed al-Assad, his Russian allies, and Turkey to attack our Kurdish allies and seize their hard-won territory.

When Vladimir Putin’s regime was behind the poisoning of Sergei Skripal and his daughter Yulia in 2019, Trump is reported to have spent 10 minutes expressing his doubts about Russian involvement to then British Prime Minister Theresa May. Only weeks later he grudgingly said “It sounds to me like it would be Russia, based on all the evidence they have,” with a qualifying caveat: “As soon as we get the facts straight, if we agree with them, we will condemn Russia or whoever it may be.”

Donald Trump has not confronted Vladimir Putin or threatened sanctions over Russia’s active measures to interferene in the 2020 election. An intelligence bulletin issued by the Department of Homeland Security warned that Moscow is attempting to sow doubt about the integrity of the 2020 elections by amplifying false claims that mail-in voting resulting in widespread fraud (again in coordination and cooperation with the Trump campaign).

Donald Trump admits that he has never confronted Vladimir Putin about offering bounties on the heads of America soldiers serving in Afghanistan.

Donald Trump has not strongly supported the democracy movement in Belarus after its 26-year strongman, Aleksandr G. Lukashenko, rigged an election last month. The best Trump could muster was vague generalities: “I like seeing democracy. Democracy is a very important word,” Mr. Trump said. “It doesn’t seem like there’s too much democracy there in Belarus.” “We are speaking to lots of people. We’ll be speaking at the appropriate time to Russia and we’ll be speaking to other people that are involved, but it’s certainly a very big march.”

Donald Trump has not said anything about U.S. service members injured after an altercation with Russian forces in northeast Syria in August. “U.S. troops have been diagnosed with mild concussion-like symptoms after the incident involving Russian and coalition armored vehicles.”

On Friday, Donald Trump, once again, said he didn’t believe there was enough evidence to blame Putin’s regime for the poisoning of Putin’s chief political rival, Alexei Navalny. The German government announced this week that the poisoning was conducted with Novichok, a chemical typically associated with Russian security services, and our NATO allies agree. Trump, however, denied there is any proof that Russia poisoned opposition leader Alexei Navalny: “So, I don’t know exactly what happened. I think that it is tragic. It is terrible. It should not happen. We have not had any proof yet, but we will take a look.” As world leaders condemn Russian aggression, Trump says he and Putin ‘get along’. 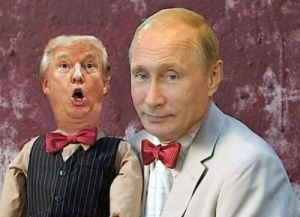 As Max Boot says, “By now we all accept that Trump won’t say or do anything about Putin’s attacks on our democracy.”

What accounts for Trump’s proclivity for Putin? Is it just part of Trump’s general admiration for dictators — or is there something more sinister going on?

The Senate Intelligence Committee offered some provocative new nuggets, including suggestions that Trump might have engaged in dalliances with Russian women during visits to Moscow that left him open to blackmail [you can take it to the bank that Russian Intelligence has photos and video]. This is the first confirmation from any branch of the U.S. government that rumors of Russian kompromat on Trump — a central feature of the infamous Steele Dossier — may have some basis in fact.

There have also been widespread reports that the Trump Organization has been dependent on Russian money. (Eric Trump in 2014: “We don’t rely on American banks. We have all the funding we need out of Russia.”) [Also Donald Trump Jr., in 2008: The “Russians make up a pretty disproportionate cross-section of a lot of our assets.”] But the Intelligence Committee had no access to Trump’s closely guarded finances, so it could offer no insights on his financial ties to Russia. 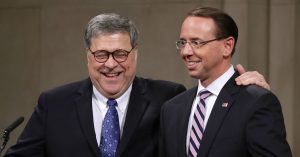 This is a stunning dereliction of duty by Rosenstein. The upshot is that what might be the biggest scandal in American political history remains maddeningly mysterious. Trump continues to cater to Putin — and we still don’t know why. All we can say for sure is that Trump consistently puts America’s interests last.

Ann Applebaum interviewed Strzok for The Atlantic, ‘Who’s Putting These Ideas in His Head?’ (excerpt):

As I read Strzok’s book, I found myself unexpectedly angry, because his narrative exposes an extraordinary failure: Despite multiple investigations by the FBI, Congress, and Mueller’s team, Americans have still never learned the full story about the Trump campaign’s relationship with Russia or Trump’s own decades-long financial ties with Russia. Four years have passed since the investigation began. Many people have been convicted of crimes. Nevertheless, portions of reports produced by Mueller, the Senate Select Committee on Intelligence, and others remain redacted. Investigations are allegedly ongoing. Details remain secret. Meanwhile, valuable FBI time and money were spent investigating which email server Hillary Clinton used—a question that, as it turned out, had no implications for U.S. security whatsoever.

Strzok himself was not exactly reassuring: He does not believe that Trump’s true relationship with Russia was ever revealed, and he now worries that it won’t ever be. It’s not clear that anyone ever followed up on the leads he had, or completed the counterintelligence investigation he began. He doesn’t say this himself, but after speaking with him I began to wonder if this is the real reason the Department of Justice broke with precedent in his case by not just firing a well-respected FBI agent but publicly discrediting him too: Strzok was getting too close to the truth.

This is the first interview he has given since he left the FBI. It has been edited for length and clarity.

Anne Applebaum: Peter, your book is called Compromised: Counterintelligence and the Threat of Donald J. Trump. That title implies that you do believe Trump has a compromised relationship with Russia. What is your evidence for that claim?

Peter Strzok: In counterintelligence, when we say somebody is “compromised,” that doesn’t necessarily mean they are a Manchurian candidate or a spy who has been wittingly recruited. I don’t think that Trump, when he meets with Putin, receives a task list for the next quarter. But I do think the president is compromised, that he is unable to put the interests of our nation first, that he acts from hidden motives, because there is leverage over him, held specifically by the Russians but potentially others as well. For example, when he is on the campaign trail saying I have no financial relationships with Russia, while at the very same time, his lawyer Michael Cohen is in Moscow negotiating a deal for a Trump Tower, there are people who know that. Vladimir Putin knows that. As it happened, the FBI knew it. But nobody in the American public knew it. So the moment that he says it, everybody who knows about that lie has leverage over him.

But that one incident is part of a pervasive pattern of conduct. Look at Trump’s failure to disclose his taxes, look at the story of his telephone call with the president of Ukraine. Time and time again, Trump is fighting tooth and nail to avoid things becoming public. If you’re a foreign intelligence service and you are able to use all of your tools to collect information—to intercept emails, intercept phone calls, recruit people or place people in the president’s orbit who can supply information—you are going to find out about the things that Trump is trying so hard to conceal because they would be damaging to him. That gives you coercive leverage. And that begins to explain why he has time and time again done these inexplicable things that have no positive outcome for U.S. national interests.

Strzok: Like, for example, why did he not take stronger action against the Russians for placing bounties on American soldiers in Afghanistan? Why has he, for no apparent reason, moved 11,000 American troops out of Germany? Or here’s an obscure one: Why did he parrot Russian propaganda and call Montenegro a “very aggressive” nation when that country had just joined NATO? Everybody knows damn well that Donald Trump couldn’t find Montenegro on a map. Who’s putting these ideas in his head?

Applebaum: Or why doesn’t he speak out against the poisoning of the Russian opposition leader Alexei Navalny, or why hasn’t he spoken up for the democracy movement in Belarus? Do you think that there are other ways in which Trump is beholden to foreign powers?

Strzok: It seems clear to me from public reporting that there are more.

Applebaum: And why haven’t they been investigated or even addressed by any official sources? The FBI? The Department of Justice? Congress?

Strzok: I don’t want to comment specifically on any of them. There are always a variety of reasons why you don’t disclose something: because it’s classified, because it’s the subject of an ongoing investigation, or even because it was investigated and found to be without merit. Or perhaps because it should have been pursued and was not, because of improper political influence.

There is much more detail in this lengthy interview.

I am sure that Peter Strzok will be making the rounds on all of the news magazines and talk shows to promote his book in the coming week.

Trump’s former attorney and “fixer,” Michael Cohen, also has his book coming out this week as well. Maybe he will provide more details about his Trump Tower Moscow negotiations, and Trump’s shady finances.