The “transcript” of the July 25 phone call between Donald Trump and Ukrainian President Volodymyr Zelensky has been released. It is actually a “readout” (.pdf) which contains this clear disclaimer:

The call begins with Trump congratulating Zelensky on his election victory, but quickly devolves into the president pressing for an investigation of his political rivals and endorsing an apparent conspiracy theory. He seems to suggest Hillary Clinton’s private email server is in Ukraine and asserts that special counsel Robert S. Mueller III’s investigation started with that country. He repeatedly says Zelensky should work with Attorney General William P. Barr or his personal lawyer, Rudolph W. Giuliani. Giuliani had separately pressed Ukrainian officials for a Biden inquiry.

At the outset of the call, Trump asks for Ukraine’s help in finding the location of the Democratic National Committee server that U.S. officials say was hacked by Russian intelligence in the run-up to the 2016 election.

“The server, they say Ukraine has it,” Trump says according to the transcript. “I would like to have the Attorney General call you or your people and I would like you to get to the bottom of it.”

President Trump wanted to order the Department of Justice (DOJ) to prosecute his 2016 presidential opponent Hillary Clinton and former FBI Director James Comey, according to The New York Times.

Trump reportedly told then-White House counsel Don McGahn of his desire to prosecute the pair, prompting McGahn to rebuff the president, saying he did not have the authority to do so.

McGahn later told the president that he did have the authority, but warned that such a request would likely elicit accusations of abuses of power, the Times reported.

What Trump is doing here is continuing to pursue what he believes to be evidence for the purpose of having his “Injustice” Department corrupted by Attorney General William “Coverup” Barr prosecute his political opponent, Hillary Clinton — “lock her up!” This is Nixonian to the Nth degree. This is an impeachable offense all by itself.

“I would like to have the Attorney General call you or your people and I would like you to get to the bottom of it,” Trump says, according to the transcript.

Trump has acknowledged publicly that he asked Zelensky to investigate Biden’s son, who served on the board of a Burisma, a Ukrainian gas company that came under scrutiny by authorities there. Hunter Biden was not accused of any wrongdoing in the investigation. As vice president, Joe Biden pressured Ukraine to fire its top prosecutor, who Biden and other Western officials said was not sufficiently pursuing corruption cases. At the time, the Ukrainians’ investigation was dormant, according to former Ukrainian and U.S. officials.

The Washington Post Fact Checker adds: “Trump continues his misleading effort to suggest that Biden somehow was involved in corruption. But The Post fact-checked these allegations in May and found they did not add up. In fact, Biden’s case has gotten stronger with time.”

Bloomberg News also did a fact check. Ukraine Prosecutor Says No Evidence of Wrongdoing by Bidens: Ukraine’s prosecutor general said in an interview that he had no evidence of wrongdoing by U.S. Democratic presidential candidate Joe Biden or his son, despite a swirl of allegations by President Donald Trump’s lawyer.

The Washington Post Fact Checker: Four Pinocchios for Trump’s claims about Hunter Biden’s China dealings: With no evidence, the president falsely accuses Joe Biden’s son of earning millions and scoring $1.5 billion in investments from a single trip to China with the then-vice president.

The corrupt prosecutor that western countries including the U.S. wanted removed, Trump says was a “good” prosecutor in the telling of his bogus conspiracy theory.

Zelensky replied that “my candidate” for the prosecutor job “will look into the situation, specifically to the company that you mentioned in this issue.” 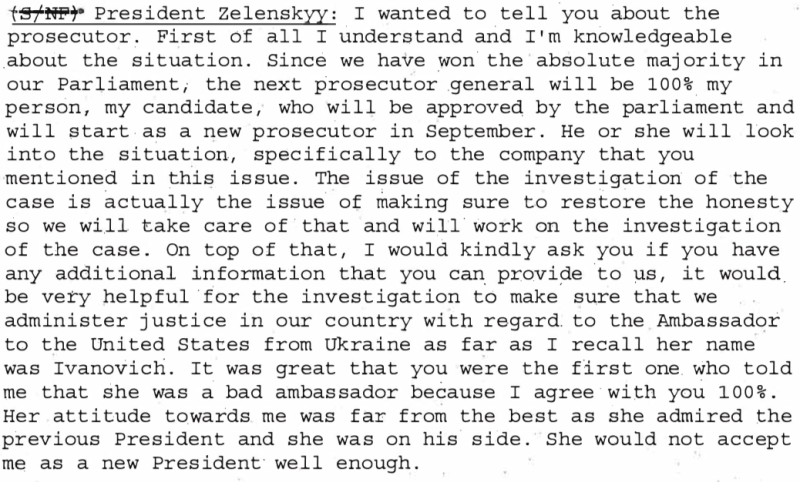 And then there appears to be what may be the “promise” that led to the whistleblower complaint: a White House visit for President Zelensky for his cooperation with Trump’s request to investigate Joe Biden. Zelensky also suggested a side trip to Ukraine when Trump visited Poland for the World War II commemoration. Trump did not make the trip, ostensibly to monitor hurricane Dorian (play a few rounds of golf). Vice President Pence went to Poland in his stead and did meet with President Zelensky. Then there is the “Injustice” Department corrupted by Attorney General William “Coverup” Barr handling of this whistleblower complaint.

Senior Justice Department officials said the director of national intelligence referred the concerns about the call to the Justice Department, after the intelligence community inspector general found that it was a possible violation of campaign finance laws that ban people from soliciting contributions from foreign sources. The inspector general later also referred the matter to the FBI.

So is there an open FBI investigation? Dangling thread of a story here.

In a statement, Justice Department spokeswoman Kerri Kupec said that the Justice Department’s criminal division “reviewed the official record of the call and determined, based on the facts and applicable law, that there was no campaign finance violation and that no further action was warranted.”

Just as William “Coverup” Barr dismissed any findings of criminal wrongdoing in the Mueller Report, there was no chance that his “Injustice” Department was ever going to find any wrongdoing here. More importantly, Trump put William “Coverup” Barr at the center of this plot to manufacture “dirt” on Trump’s political opponent to benefit his reelection campaign. Justice Department spokeswoman Kerri Kupec’s denials wring hollow. Trump’s repeated suggestions to President Zelensky to contact his attorney general and his personal attorney Rudy Giuliani merit further investigation. It is not credible that there was no follow-up conversations.

This phone call was part of a “pattern” of misconduct alleged in the whistleblower complaint. There are other instances of reported misconduct that have yet to become public knowledge.

Lawmakers have demanded to see not just the  readout of Trump’s call with Zelensky, but the whistleblower complaint as well. Administration officials are discussing the possibility of providing that document to Congress in the coming days.

The whistleblower is also negotiating with the acting Director of National Intelligence and the House and Senate Intelligence Committee’s to testify before the committees.

Acting Director of National Intelligence Joseph Maguire will appear in an open session before the House Permanent Select Committee on Intelligence Thursday, Sept. 26.

UPDATE: The Washington Post reports, Acting director of national intelligence threatened to resign if he couldn’t speak freely before Congress on whistleblower complaint:

The acting Director of National Intelligence threatened to resign over concerns that the White House might attempt to force him to stonewall Congress when he testifies Thursday about an explosive whistleblower complaint about the president, according to current and former U.S. officials familiar with the matter.

The officials said that Joseph Maguire, who was thrust into the top intelligence post last month, warned the White House that he was not willing to withhold information from Congress, where he is scheduled to testify in open and closed hearings on Thursday.

The move was in part designed to force the White House to make an explicit legal decision on whether it was going to assert executive privilege over the whistleblower complaint, which centers on a call that Trump made with the leader of Ukraine in late July.

In essence, Maguire was serving notice that he intended to cooperate with lawmakers unless the White House moved forward with a legal case to prevent him from doing so, the officials said.

Joseph Maguire issued a subsequent statement saying that at no time has he ever considered resigning, disputing the reporting.

The call in question took place on April 21 of this year, shortly after Zelensky won election. There is no apparent White House read out of what was discussed between the two world leaders, but foreign press reports said it was congratulatory.

Now the call is of keen interest to  Democrats on Capitol Hill who last month launched an investigation into President Trump and Giuliani and their overtures to Ukraine about Biden, a congressional aide told The Daily Beast. A source on the House Intelligence Committee, which is involved in the investigation, told The Daily Beast on Wednesday that officials were “aware of this call” and “obviously following up on it.”

Congressional Democrats may not encounter much resistance as they look into the April 21st call. In a press conference Wednesday at the Intercontinental Hotel in New York, Trump said he would release the transcript of his first discussion with the Ukrainian president.

“I can save you a lot of time, they were all perfect,” Trump said, referring to his calls with Zelensky.

Should Trump follow through on that promise, it would mark the second case of him revealing details of his previously private discussions with Zelensky.

Giuliani’s role has been of particular interest to House Democrats. The Daily Beast first reported that lawmakers were preparing an investigation into Giuliani’s activities in Ukraine, among which involved efforts to dig up dirt on Biden. Then, last month, the House Foreign Affairs, Intelligence and Oversight committees launched an official investigation into President Trump and Giuliani, saying they would look into whether Giuliani’s communications with Ukraine threatened U.S. foreign policy interests. The committees also said they would probe Trump’s temporary decision to withhold aid from Ukraine.