Yeah sure, that’s the reason. This is all reality TV being produced by the propagandists at Fox News aka Trump TV and the Trump campaign to scare the elderly white shut-ins who watch Fox News all day.

Attorney General William “Coverup” Barr said that in Kansas City, Mo., where officials just two weeks ago had announced the commencement of “Operation Legend,” 200 arrests had been made.

The Kansas City Star, though, quickly raised questions about that figure, noting that officials had only announced charges against one person as part of the operation. Justice Department officials soon backtracked.

Barr, the officials said, had been using a figure that encompassed arrests since December, and included those taken into custody by state and local officials, well before “Operation Legend,” under a different anti-crime initiative dubbed “Operation Relentless Pursuit.”

[T]he error represented a significant gaffe. Trump and Barr already were facing criticism from local officials wary of federal police roaming their streets, and some said the announcement Wednesday seemed to be a political stunt.

Fmr DHS Sec. Tom Ridge Slams Trump for ‘Reality TV Approach’ in Pushing Federal Agents Into Cities: ‘I’m Not Sure They Have a Plan’:

Former Bush Homeland Security Secretary Tom Ridge offered withering criticism of the Trump administration’s deployment of federal agents into cities, calling out the noted lack of coordination and relatively small size as indicative of a “reality TV approach” that is more focused on publicity than actually reducing crime. 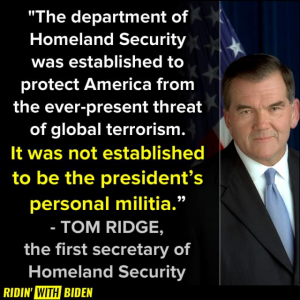 “It seems like a reality TV approach,” Ridge said. “Let’s check this out: 200 officers and by the way, they are not his personal militia, but he’s going to send in 200 officers, good men and women, no doubt about that, to work with 13,000 police, men and women, no doubt with a sudden surge and they may have a few arrests and may have a few imprisonments but they’re not going to sustain that commitment, and nothing in this plan, I’m not sure they have a plan. Have they talked to the mayor? Have they talked with chief of police? Have they talked with the U.S. Attorney, etc., etc. and they’ll leave in a couple weeks and lawlessness will reemerge because they haven’t dealt with the social and economic conditions that underpin the lawlessness. It’s a disappointing response to a serious problem but it’s typical of somebody who thinks reality TV is real.”

Noting Ridge’s use of “personal militia” in his answer, Berman pressed Ridge on what he meant:

“I mean that the men and women in not only DHS but throughout the federal law enforcement agencies and many, many agencies go to work every single day to try to provide safe and secure communities all around this country,” Ridge responded. “But you cannot secure the country from inside the beltway. So the best thing you can do is deploy these federal agents, good men and women to work in cooperation with the state and local law enforcement. But you just don’t pick up the phone and order them into any community, and, I would say — rarely will I speak for Republicans or Democrats or anybody in elected office — I doubt if there is a Republican or Democrat today, mayor or governor, that wouldn’t contest the unilateral incursion of federal agents without coordination with state and local law enforcement officials. I just don’t think that would happen. Nor should it, by the way. ” 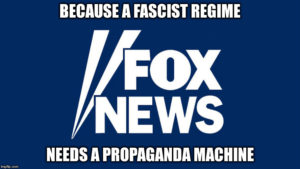 The descriptions of events in Portland, Ore., were emblazoned this week across scenes of mayhem playing in a loop on Fox News and pumped out by right-wing influencers on social media. The dystopian portrait has turned the liberal city into a test case for President Trump’s latest performance of “law and order” — the catchphrase he is making a focal point of his flagging reelection campaign by portraying Democrats as presiding over urban battle zones in which demonstrators are desecrating federal property.

The Trump administration has escalated tensions, local officials argue, by sending camouflaged officers to confront activists, most of whom have practiced nonviolence. The president, while devolving control of the coronavirus response to state and local authorities, has vowed to replicate the federal crackdown in Chicago, New York and other Democratic-controlled cities seeing sustained protests after the police killing of George Floyd. And he is being cheered on by provocateurs online and in the media pointing to the backlash against federal mobilization as a sign that a still more severe response is needed.

And exactly why are these federal police dressed in military combat uniforms? They are not U.S. military but want to give the appearance that they are. Retired Army Lt. Gen. Russel Honoré erupted at the scenes of unmarked, camoflauged, and heavily armed federal agents patrolling the streets of Portland and violently clashing with protestors, unmistakably registering his disapproval by proclaiming ‘What Kind of Bullshit Is This?!’: Retired General Who Led Katrina Response GOES OFF on Trump’s Militarized Portland Crackdown:

“General, what made you the angriest looking at these pictures out of Portland, Oregon?” Williams asked, lighting the fuse on Honoré’s fiery barrage.

“Number one, they were wearing military uniforms,” the general angrily noted. “That uniform represents the cloth of our nation,  for people who don’t draw overtime, who serve around the world at the direction of the national command authority, and it’s not to be used as an instrument of protest suppression.”

“That uniform is designed to blend into terrain, not to make you look like a warrior,” Honoré then noted, highlighting the tactical uselessness of wearing camouflage in an urban environment.

“They’re wearing these uniforms as a function of intimidation, to look like warriors,” he added. “Real soldiers just don’t walk up to people and start beating on ’em. Real police don’t do that. The police have the authority to detain you, and then somebody else will decide whether you get charged or whether you go to jail for whatever offense you might have violated.”

“They are acting like an uncontrolled mob on the street with uniforms and badges that they don’t show,” he pointed out, a tactic that the Portland mayor decried as “very un-American.”

“You shouldn’t — police don’t do this. Watch this, what kind of bullshit is this?!” Honore exclaimed as video showed federal agents using batons and tear gas to violently assault Navy veteran Chris David [nka “Captain Portland”], who was merely trying to talk to police. “Wolf needs to be run out of Washington. He has no business in charge of Homeland Security. We’re talking about people like [former DHS Secretaries Michael] Chertoff and Tom Ridge, those type of people of stature led Homeland Security. [The Trump administration has] denigrated this to a lawless group who go around and think they can suppress demonstrators doing peaceful and disobedience-type demonstrations. This is a shame.”

Lt Gen. Russel Honoré had much more to say in the interview above, all of with which I agree.

And experts say acting DHS Secretary Chad Wolf can’t legally serve as acting Secretary of DHS, compounding issues raised by the crackdown. Trump’s Portland crackdown is controversial. The man spearheading it might be doing so illegally. This former lobbyist must go. 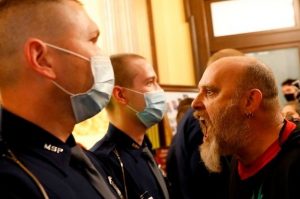 Remember when being a conservative meant that “local government closest to the people is always the best government,” and support for federalism, i.e., “states rights” against encroachment by the big bad federal government?

And whatever happened to all that “Second Amendment remedy” talk against a tyrannical federal government taking away constitutional rights (First Amendment freedom of speech, assembly, and to petition government)? Oh, that’s right … that only applies to armed right-wing anti-government militias who threaten legislators in their state capitols to stop democracy.

The Constitution leaves the “so-called police power” in the hands of state and local officials. It is one of the “powers not delegated the United States” and instead is “reserved to the states,” as the 10th Amendment says. Legal analysis: Is Trump stretching the law to deploy federal police power in cities? Duh, yes!

It wasn’t all that long ago that conservatives and Fox News were cheering on the “sagebrush rebellion” and an insurrection in the The 2014 controversy over Nevada rancher Cliven Bundy, in which a number of Arizona Republicans participated (that’s Rep. Paul Gosar and current Arizona GOP Chair Kelli “Chemtrails” Ward with Bundy), and the 2016 standoff over the Malheur National Wildlife Refuge in Oregon by Ammon Bundy.

OMG, if President Obama had done what Donald Trump is doing right now, sending his “private militia” culled from federal law enforcement agencies dressed in military uniforms to put down these insurrectionist rebellions, Fox News would have been screaming holy hell that it’s another Ruby Ridge and Waco – which led to the domestic terrorist bombing by Timothy McVeigh of the Alfred P. Murrah Federal Building in Oklahoma City.

And remember that batshit crazy Jade Helm conspiracy theory that President Obama was somehow going to use the U.S. military to disarm Americans and declare martial law, and put Americans in FEMA concentration camps? Fox News promoted this for weeks, not coincidentally, That ‘Jade Helm’ Conspiracy Freakout Was Spurred By Russian Bots, Ex-Intel Chief Says, as a test run for the 2016 election. Fox News is an ancillary to Russian active measures propaganda, and never forget it. It is a malignant cancer on the American body politic.

The modern Republican Party is virulently anti-government when Democrats are in control of government. But they flip 180 degrees when one of their own authoritarian Republicans is in charge, and suddenly they are for a police state with secret police and GOPstapo agents to lock up anyone who does not share their fascist authoritarian wet dream in concentration camps. The only consistent unifying belief system is being anti-democratic.

This is the import of Trump’s words:

“If Biden got in, that would be true for the country,” Trump told reporters Monday after saying more agents would be deployed. “The whole country would go to hell. And we’re not going to let it go to hell.”

What he is actually saying is that “we are not going to let Democrats run the country.” It is an anti-democratic, and anti-Democrat, message of white privilege entitlement to authoritarian Republicans.

Even as conservative pundits raise alarm about turmoil in Portland, she said, they have not yet produced imagery to support their warnings. Still, the persistent verbal reinforcement “makes you think you are seeing a reality when in fact what you’re seeing is selected distortion.”

Sometimes, however, the visual evidence cuts in the exact opposite direction.

A Fox “alert” this week about the “54th straight night” of Portland protests led with a clip of a crowd singing the gospel that became an anthem of the civil rights movement, “We Shall Overcome.”

This is why the Trump campaign is currently running a Trump Ad Using a Photo from 2014 Ukraine Protest:

But that photo is actually from a pro-democracy protest in Kyiv, Ukraine, and was taken in 2014.

Well, it is consistent with Trump’s fascist GOPstapo agents beating up pro-democracy protesters in America.