At the start of the march at 11:00 a.m., Phoenix police in an unofficial estimate said there were roughly 30,000 people at #red4ed walkout march, saying it spans at least 1.5 miles. Police later said they are not releasing official estimates. 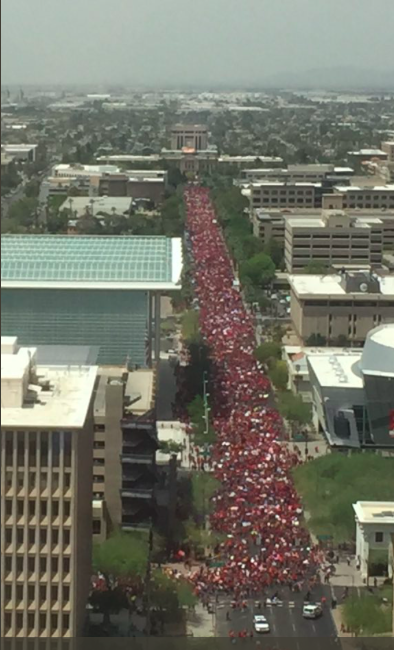 While Phoenix police are not releasing an official count of the crowd size at the march and the Capitol rally, Phoenix Councilwoman Kate Gallego tweeted that police had told her the crowd was at about 50,000. The crowd filled the entire Capitol lawn, overflowing into Wesley Bolin Plaza and the surrounding streets.

At 1:30 p.m., organizers announced they would be ending the event early due to the heat, which hit 95 degrees. There were reports of people collapsing from the heat.

Organizers announced they will return to the Capitol at 10 a.m. Friday.

There will be no march tomorrow, just a rally at the Capitol.

Organizers vowed that the crowd would return tomorrow and continue to make its statement.