It only takes one asshole: Libertarian Republican from Kentucky, Rep. Thomas Massie, confirmed that he will ask for a roll-call vote on the $2 trillion coronavirus relief bill being debated Friday on the House floor. The Hill reports, Massie says he’ll force roll-call vote:

The libertarian-leaning conservative took to Twitter to announce he would request a quorum, which would require 218 members to be present. Leadership sources say they believe they have enough lawmakers needed to pass the bill via voice vote. 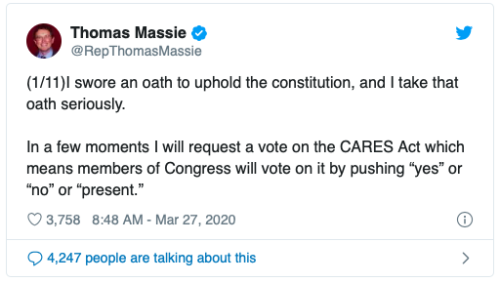 Massie’s actions come after House Minority Leader Kevin McCarthy (R-CA) urged his members against attempting to procedurally interfere with its passage during a House GOP conference call on Thursday.

I remember back in the day when some backbencher in the House would never dare defy his party leadership, especially on a bill that provides critical funding during a national crisis. Who the hell does this yahoo think he is? This should be the end of Massie’s political career.

In the wake of the news Massie intended to derail leaders’ plans, leadership in both parties called on members to return to Washington if possible to vote on the measure.

Massie’s decision has forced many House lawmakers to return to Washington, since his decision to ask for a roll-call vote prevents the bill from being passed on a voice vote. Lawmakers wanted to avoid having lawmakers converge on Washington, largely because of the fear of the spreading coronavirus.

Kentucky, you have to stop sending the nation your worst. Between Mitch McConnell breaking the entire Senate and Rand Paul happy to infect any of his colleagues with coronavirus, it was bad enough. Now we have to have Rep. Thomas f’ing Massie?  He’s saying maybe he feels like forcing a floor vote on the coronavirus stimulus bill, sending his irate colleagues scrambling to come back to D.C. in the event they have to vote.

Everything appeared to be on track. The Senate passed a bipartisan economic rescue plan unanimously this week; the White House has enthusiastically endorsed it; and there’s ample support for the package in the House.

And yet, there’s no shortage of drama.

Democratic and Republican leaders were scrambling members of Congress back to Washington late Thursday because they suddenly believe the $2 trillion economic relief package might not pass by the voice vote planned for Friday and could be delayed if at least 216 members don’t show up to vote on the floor.

There was some talk about trying to pass the plan by unanimous consent, but House Speaker Nancy Pelosi (D-Calif.) instead said that the chamber would try to pass the bill by voice vote.

That’d work just fine, but it opens the door to one member taking advantage of a procedural opportunity and demanding a recorded vote. Rep. Thomas Massie (R-Ky.) has signaled his willingness to do exactly that.

If he follows through, the Kentucky Republican — perhaps best known for going after John Kerry’s undergraduate degree — wouldn’t be able to defeat the legislation, but he would be able to delay it and its benefits.

Or put another way, Massie is putting his own colleagues at risk for a stunt that will serve no practical purpose.

Among those returning to Capitol Hill in anticipation of Massie’s procedural move is Rep. Peter King (R-N.Y.), who noted on Twitter this morning that his Kentucky colleague’s efforts are “disgraceful” and “irresponsible.” Donald Trump went further, tweeting that Massie is a “third-rate grandstander” whom the president wants to “throw out” of the Republican Party.

Not surprisingly, plenty of House Democrats aren’t pleased, either.

If Massie demands a roll-call vote, the House will need 216 members to be present, and it’s not yet clear if there will be enough lawmakers on hand.

UPDATED: Turns out that Rep. Massie couldn’t get Republicans to second his motion. It should still be the end of his political career. Roll Call reports, Massive coronavirus aid package clears House, awaits Trump signature:

The largest fiscal relief measure in U.S. history is on its way to President Donald Trump’s desk after the House cleared a roughly $2.3 trillion package of direct aid to families, businesses, hospitals and states.

The voice vote marks the third bill lawmakers have passed to respond to the COVID-19 pandemic since congressional briefings on the initial outbreak began two months ago. Those earlier measures bring the total price tag to perhaps $2.5 trillion.

House leaders intended to live up to their “social distancing” mandate and limit the number of lawmakers needed on the House floor through passing it by unanimous consent or by voice vote.

However, a threat from Thomas Massie, R-Ky., to call for a recorded vote led House leaders to call on members to return to Washington in order to assemble the necessary quorum, or majority of the House.

Trump promptly called out Massie via tweet for “grandstanding” and said he should be expelled from the GOP. “He just wants the publicity,” Trump wrote.

Minority Leader Kevin McCarthy, R-Calif., made a beeline for Massie when he entered the chamber.  The animated conversation swiftly moved from the GOP side of the aisle to the front of the chamber where McCarthy, Speaker Nancy Pelosi, D-Calif., and Massie huddled together.

Massie was unbowed, however, tweeting his intention to call a recorded vote even as he was getting hectored. But ultimately Massie’s bid was thwarted when he couldn’t get one-fifth of members present to stand and second his request, which under House rules precludes a recorded vote in this situation. Subsequently, the bill passed by voice vote.

House debate lasted about four and a half hours, longer than originally expected as leaders scrambled to assess the floor vote situation.

Floor debate was somewhat more crowded than normal, as members who returned appeared to go directly to the chamber and stay that the whole time. Members had to contact their leadership ahead of time to schedule when they would speak.

When the House came into session at 9 a.m. there were about 45 members on the floor — not all of them sitting six feet apart. Members didn’t appear to be restricted from going in or out any of the doors they wanted, but many preferred to stay in their seats throughout the debate.

There were four spots on the floor that members spoke from, each of which had a canister of disinfecting wipes, paper towels and hand sanitizer. Some members used the disinfecting wipes to wipe down the tabletop podiums beforehand, but many spoke as they normally would.

Lawmakers used their elbows or rear ends to push open the swinging doors to enter and exit the chamber. Louie Gohmert, R-Texas, brought an aerosol can of Lysol disinfectant spray, which he spritzed toward a colleague when he leaned in too close.

House doorkeepers propped open the doors to all the third floor galleries overlooking the chamber just after noon, allowing lawmakers to practice social distancing by sitting in the balconies rather than crowding on the House floor.

Those who didn’t travel back to Capitol Hill for the vote were allowed to record brief statements to air on C-SPAN, which agreed to make an exception amid the crisis.

“In a first for the 41-year old cable network, C-SPAN has responded to a special request earlier today from [House Majority Leader Steny H. Hoyer] to help connect members of Congress with the public during the unprecedented public health crisis created by Covid-19,” the cable network said in a statement.