McFadden’s decision comes after House Democrats had drawn parallels between their fight for Trump’s private tax information and a November court ruling ordering McGahn to comply with House Judiciary Democrats’ demands to speak with him about Russian interference in the 2016 presidential election. That decision is now being appealed.

Democrats have urged the appeals court to rule quickly in a bid to determine whether the former Trump aide has evidence that could be folded into their presentation at the upcoming Senate trial that will determine whether the president should be removed from office or to assist them in drafting additional articles of impeachment.

Democrats seeking Trump’s tax information said the November ruling buttressed their arguments that McFadden should reject pleas by the president’s lawyers to dismiss their suit.

The case is still in its early stages, and Trump lawyers are demanding that it be dismissed, arguing that the court doesn’t have jurisdiction over fights between Congress and the White House over information.

In the McGahn case, a three-judge panel heard oral arguments earlier this month, and a ruling is possible by the end of this month.

The Trump “Injustice” Department is appealing a decision backing Judiciary Democrats who want to question McGahn under oath about what he witnessed in the White House in connection to Trump’s efforts to stymie special counsel Robert Mueller’s probe into Russian election interference in 2016.

The Justice Department argues that McGahn, like many other government officials, has “absolute immunity” from speaking to congressional investigators. [Pro Tip: There is no such immunity at law.] In addition, the department has urged the court to avoid getting involved in any dispute between the other two branches of government.

Whoever loses the case before the three-judge panel is likely to appeal that decision, first to the entire D.C. Circuit panel of judges and ultimately to the Supreme Court. And even if the courts order McGahn to testify, the Trump administration would have the option of drawing out the process even longer by asserting executive privilege over specific questions posed by Democratic investigators.

That drawn-out process could mean Neal’s suit — one of several legal fights over access to information about Trump’s finances, including a couple of cases headed to the Supreme Court in March — will be on hold for a considerable period of time.

U.S. District Court Judge Trevor McFadden is a former Trump transition team volunteer and has donated to the Trump campaign. So no bias there.

Meanwhile, Legal experts are perplexed why Trump-appointed judge refuses to rule on Trump tax case until other Trump cases are decided: 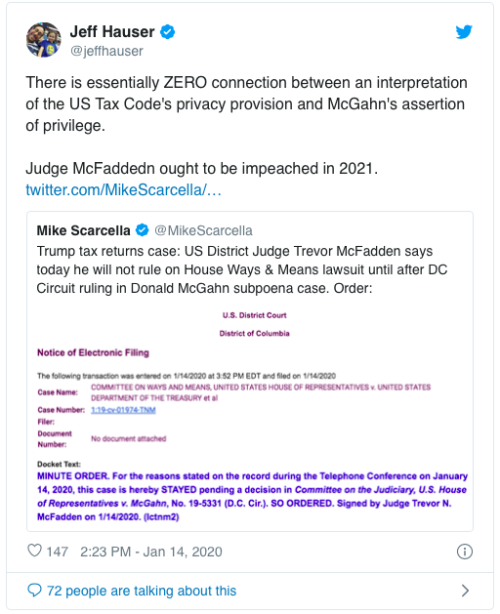 Justices and judges may pride themselves on not being rushed into precipitous action, but the judiciary also has the capacity to move very quickly when circumstances demand it. That’s why it is particularly noteworthy that the current failure to move things along is so advantageous to Donald Trump and his chances for success in the November 2020 election, and also so obviously disadvantaging the Democratic-held House of Representatives. One could be forgiven for starting to wonder whether the courts are taking sides but doing it in a way that looks measured and restrained. The thing is: Sometimes not resolving an exigent case is a decision.

It’s been clear for some time now that the beating heart of this president’s litigation strategy is an effort to run out the clock on issues ranging from the subpoenas of his financial records to his blanket refusals to permit anyone in his ambit to testify before Congress. As the New York Times’ Charlie Savage put it in November: “Like a football team up late in a game whose defense hangs back to prevent big plays while letting its opponent make shorter gains, Mr. Trump’s legal team is looking to run out the clock, putting forth aggressive legal theories often backed by scant precedent. The strategy risks periodic bad headlines in the short term and could lead to definitive rulings that hamstring future presidents—but it is demonstrably advantageous for consuming time.”

Indeed, when House Democrats essentially opted to give up on any hope for relief in the federal courts because, as Adam Schiff put it last fall, “we are not willing to go the months and months and months of rope-a-dope in the courts, which the administration would love to do,” the decision was taken to mean Democrats had given up on witness testimony altogether in the House proceedings. They hadn’t, but that statement may well come back to haunt Senate Democrats who now are facing the prospect of a trial without additional witness testimony of any sort. Having opted not to wait for court rulings requiring testimony from Don McGahn and John Bolton, the door now may have closed on the opportunity to hear from them voluntarily.

What’s stunning is the degree to which the courts are complicit in all this. The courts have aided and abetted the Trump legal team and Mitch McConnell by refusing to behave as if time is a factor in any of these proceedings. That’s evident in the decision to docket a pair of financial records cases no earlier than March and the meandering pace of the gamesmanship around a case seeking to end the Affordable Care Act through judicial fiat. But the real coup de grâce was the failure of the Supreme Court and lower federal courts to resolve congressional subpoenas around the impeachment process with alacrity when it was altogether plain what was needed. Had the courts signaled a willingness to act at a pace befitting the needs of the moment, Schiff might have made a different choice. Sometimes the appearance of studied deliberation serves nihilism and chaos, even as it pretends at neutrality and institutionalism.

It didn’t have to be this way. Chief Judge John J. Sirica of the U.S. District Court for the District of Columbia insisted that the Watergate tapes case play out so quickly that the White House was caught off guard and unable to formulate a workaround in time. The Supreme Court heard the Nixon tapes case on July 8, 1974, after the term had ended. It issued its unanimous ruling a few weeks later. In 1942, during World War II, Franklin Roosevelt wanted to execute some German saboteurs who came to Long Island by submarine—and he wanted to do so quickly. The eight defendants were tried by military tribunal lickety-split. When the constitutionality of this use of military tribunals was challenged—some of the alleged saboteurs were American citizens—the Supreme Court interrupted its carefully guarded summer recess, heard extra-long arguments on July 29 and 30 of 1942, and issued its judgment, giving its unanimous OK on the July 31. (So anxious were the justices to rule quickly that the actual opinion justifying the ruling did not come out until the end of October, long after the men had been executed in the electric chair.) Justices have heard emergency petitions in far-flung places, including a 1973 hearing over a petition to stop the military from bombing Cambodia that took place in a courthouse near Justice William O. Douglas’ home in the mountains of Washington state. When William Barr’s Justice Department has asked that the high court rush cases onto its docket, sometimes even before intermediate courts have ruled, the Supreme Court has accommodated. When stays of execution are requested in death penalty cases, they seem to fly through the courts on their way to being denied.

If you really want to talk about haste, there is always the breathtaking example of the court moving expeditiously to award the election of 2000 to George W. Bush. The warp speed at which that intervention took place proves quite a contrast to the justices’, and several lower courts’, signaling of their own virtuousness in refusing to be rushed into action around anything involving the 2020 elections. Time and time again in recent years the courts have shown that exigency is in the eye of the beholder, and that the exigencies around the citizenship census question or the transgender military ban are manifestly more vital than those around Trump’s flouting of the rule of law. Some optimists had flagged Chief Justice John Roberts’ recent use of the word dispatch in his description of judicial work in his State of the Judiciary report last week as a supposed signal that he has some interest in hastily resolving urgent matters. And yet, the chief justice has shown little taste for inserting his court into the current political maelstrom beyond his recent warnings that, in general, political maelstroms are unseemly and unfortunate.

So, yes, you’re also entitled to peek around on the internet and see which presidents (Democratic ones or Republicans) appointed which judges—and then compare that with how they have ruled on matters in which time is of the essence and consequential issues around executive power, checks and balances, and the rule of law were at issue. You may find it a sad exercise. This president has benefited at almost every turn from a judicial presumption that someone else needs to rein him in.

Make no mistake: It is a choice to ignore a congressional subpoena, and it is a choice to claim that only a court can resolve that impasse. When that choice is taken by the president, it seems fair to ask that the courts resolve the matter with something more prompt than the “all deliberate speed” with which they allowed desegregation to drag on for years and years after Brown v. Board of Education. Sometimes, not resolving a case in time for relief of any kind is a decision. Calling it lofty institutional deliberation instead of a dodge is a play to the court of public opinion, but not a court of law.

Roger Parloff writes at Newsweek that “President Donald Trump’s most jealously guarded secrets—his financial records, including tax returns—will probably remain hidden from voters until after the next election.” Donald Trump’s Finances: Will Voters Ever Know The Facts?

That’s just one likely consequence of the U.S. Supreme Court’s red-letter decision earlier this month to hear three cases, involving five subpoenas, seeking those records. Though the Justices will hear arguments in March and rule by next June—several months before we go to the polls—it seems increasingly doubtful that they will order a quick, clean turnover of the president’s crown jewels.

Parloff provides his deep-dive analysis of the cases pending on appeal. It’s worth the read. But he concludes:

It seems certain that, in time, grand jurors, journalists, biographers, and historians will all pore over Trump’s financial records, including his tax returns.

And this ought to be considered a crime. It is the corruption of the courts by partisan Republican judges. This is what “The Enemy of The People,” Senate Majority Leader Mitch McConnell, has been working to achieve by packing the federal courts with unqualified and unfit to serve federal judges selected by the radical right-wing Federalist Society.