On April 28, 1996, a gunman opened fire on tourists in a seaside resort in Port Arthur, Tasmania in Australia. By the time he was finished, he had killed 35 people and wounded 23 more. It was the worst mass murder in Australia’s history.

How did the government of Australia respond? In 1996, Australia Enacted Strict Gun Laws. It Hasn’t Had a Mass Shooting Since.

At the heart of the push was a massive buyback of more than 600,000 semi-automatic shotguns and rifles, or about one-fifth of all firearms in circulation in Australia. The country’s new gun laws prohibited private sales, required that all weapons be individually registered to their owners, and required that gun buyers present a “genuine reason” for needing each weapon at the time of the purchase. (Self-defense did not count.) In the wake of the tragedy, polls showed public support for these measures at upwards of 90 percent.

What happened next has been the subject of several academic studies. Violent crime and gun-related deaths did not come to an end in Australia, of course. But as the Washington Post’s Wonkblog pointed out in August, homicides by firearm plunged 59 percent between 1995 and 2006, with no corresponding increase in non-firearm-related homicides. The drop in suicides by gun was even steeper: 65 percent. Studies found a close correlation between the sharp declines and the gun buybacks. Robberies involving a firearm also dropped significantly. Meanwhile, home invasions did not increase, contrary to fears that firearm ownership is needed to deter such crimes. But here’s the most stunning statistic. In the decade before the Port Arthur massacre, there had been 11 mass shootings in the country. There hasn’t been a single one in Australia since.

It took New Zealand just six days to announce an immediate plan to change to the nation’s gun policy after a gunman killed 50 people at two mosques in Christchurch[.]

[A] day after the first victims were laid to rest, Prime Minister Jacinda Ardern announced a national ban on all military-style semiautomatic weapons, all high-capacity ammunition magazines and all parts that allow weapons to be modified into the kinds of guns used in last week’s attack.

It is unclear how the weapons ban will be felt in New Zealand, where there are plenty of guns but relatively few murders. Since 2007, gun homicides have been in the single digits every year except in 2009, when there were 11.

As of Sunday, Gun owners in New Zealand voluntarily surrender more than 10,000 firearms:

More than 10,000 firearms have been voluntarily surrendered to authorities in New Zealand as part of a buyback scheme that was introduced after the country’s worst mass shooting in modern history.

As of Sunday, a total of 10,242 firearms had been handed in to police since the gun buyback kicked off on July 13, and another 1,269 had been handed in under amnesty, meaning people are able to anonymously hand in firearms with no questions asked — even if they don’t have a valid firearms license, New Zealand Police said in a statement Monday.

Under the buyback scheme which was brought into law in June and launched on July 13, gun owners have until December 20 to hand in semi-automatics, parts that convert firearms into semi-automatics, magazines over a certain capacity, and some shotguns. Gun owners are compensated, with each weapon allocated a pre-determined set price. The buyback scheme is expected to cost up to $200 million.

Already, more than 90 collection events have been held around the country, and 7,180 firearm owners have attended, police said.

“We have been really happy with New Zealand’s engagement and response to this process and we look forward to more people taking part in the buyback scheme over the coming months,” police said in a statement.

Police estimate there are about 1.2 million guns are in circulation in the country — around one gun for every four people — but they do not know how many are semi-automatics.

New Zealand and Australia’s approach contrasts with that of the United States, which has not introduced similar restrictions despite a long list of mass shootings.

Each time a mass shooting strikes one of our communities we grieve. We gather our loved ones. We reach for answers and clamor for action. Each time, for a moment, it feels as if this time will be different.

But then the news cycle rolls on. And we push down the gut-churning knowledge that it will be only a matter of time before it happens again. Between El Paso and Dayton only about 13 hourselapsed.

Republican leaders try to prevent action and parrot N.R.A. messaging — as Donald Trump did last week when he said, “Mental illness and hatred pulls the trigger, not the gun.”

This is the same president who during his first year in office repealed a rule President Barack Obama and I put in place to help keep guns out of the hands of people with certain mental illnesses. This is the same president who said after Charlottesville that there were “very fine people on both sides,” and who continues to fan the flames of hate and white supremacy. We can’t trust his diagnosis.

We have a huge problem with guns. Assault weapons — military-style firearms designed to fire rapidly — are a threat to our national security, and we should treat them as such. Anyone who pretends there’s nothing we can do is lying — and holding that view should be disqualifying for anyone seeking to lead our country.

I know, because with Senator Dianne Feinstein I led the effort to enact the 1994 law that banned assault weapons and high-capacity magazines for 10 years. Those gun safety reforms made our nation demonstrably more secure.

They were also, sadly, the last meaningful gun legislation we were able get signed into law before the N.R.A. and the gun manufacturers put the Republican Party in a headlock.

I fought hard to extend the assault weapons and high-capacity magazines bans in 2004. The Republicans who allowed these laws to expire asserted that they were ineffective. But, almost 15 years after the bans expired, with the unfortunate benefit of hindsight, we now know that they did make a difference.

Many police departments have reported an increase in criminals using assault weapons since 2004. And multiple analyses of the data around mass shootings provide evidence that, from 1994 to 2004, the years when assault weapons and high-capacity magazines were banned, there were fewer mass shootings — fewer deaths, fewer families needlessly destroyed.

There’s overwhelming data that shootings committed with assault weapons kill more people than shootings with other types of guns. And that’s the point.

We have to get these weapons of war off our streets.

Nearly 70 percent of the American public support a ban on assault weapons — including 54 percent of Republicans.

When you have that kind of broad public support for legislation that will make everyone safer, and it still can’t get through the Senate — the problem is with weak-willed leaders who care more about their campaign coffers than children in coffins.

I won’t stop there. I’ll get universal background checks passed, building on the Brady Bill, which establishing the background check system and which I helped push through Congress in 1993. I’ll accelerate the development and deployment of smart-gun technology — something gun manufacturers have opposed — so that guns are keyed to the individual biometrics of authorized owners.

There is so much we can do — practical, sensible steps that draw broad support among the American people. But we will see only more and deadlier shootings if we continue to dodge the core issue of unregulated assault weapons and high-capacity magazines in our communities.

If we cannot rise to meet this moment, it won’t just be a political failure. It will be a moral one … I, for one, won’t stand for that. And the American people are with me.

The fact is that nothing is ever going to be done about gun violence in the United States so long as the “Grim Reaper” Mitch McConnell and Republicans are in control of the U.S. Senate. Former Republican congressman David Jolly said it best in an interview on MSNBC last week.

‘Beat every single one of them’: Ex-GOP congressman’s message to Republicans is ‘your time is coming’:

“We focus on Donald Trump, his contribution to the national narrative, but Nicolle, I think that gives a pass to the broader Republican Party. We have to talk about that as well in this moment because it is their silence that normalized this escalation of this narrative across the country that Trump continues to reinforce,” Jolly said.

“I find myself today offering the same insight I did at the night of the Parkland shooting a few hours from our home in Florida, which is this: Republicans will never do anything on gun control, nothing, ever,” he said. “They won’t.”

“Think about Las Vegas. They did nothing when 500 people were injured. The Pulse nightclub, 50 killed. The question for the nation was, do we allow suspected terrorists — suspected terrorists — to buy firearms? Republicans did nothing. Parkland, they did nothing. Emanuel AME in South Carolina, nothing. Go to Sandy Hook in Connecticut, nothing. Jewish temple in Pittsburgh, nothing. The Jewish temple in San Diego, nothing. Southerland Springs, Evangelical church in Texas, nothing. Now we have Texas, now we have Ohio in the same weekend and all we get is silence,” he explained.

“I say that because if this is the issue that informs your ideology as a voter, the strength to draw in this moment is to beat Republicans, beat them. Beat every single one of them,” Jolly urged. “Even the safe ones in the House, beat them. Beat them in the Senate. Take back the Senate.”

“You take me away with your bluntness. But you’re not wrong. No Republican has ever been moved by any of those tragedies,” Wallace replied.

“The last thing I will say, Nicolle, to my former Republican colleagues and Republican voters, if you actually think the Second Amendment was envisioned to protect gun rights of this moment of national tragedy to allow carnage with weapons of war, if you actually think that’s what the Second Amendment protected, you’re fundamentally, constitutionally ignorant,” he argued. “And if you know that’s not what it protects and you continue to do nothing, you’re worse than constitutionally ignorant, you’re a scoundrel.”

“All I can ever think of in this moment when I see Republicans do absolutely nothing, your time is coming. My mom likes to say the wheels of justice grind slowly but they grind increasingly and exceedingly fine. That’s what has happened to a lot of Republican public careers in moments like this,” Jolly added.

Seven in 10 voters, including 54 percent of Republicans, said they support a ban on assault-style weapons, according to the Aug. 5-7 survey — and even greater shares backed other provisions such as banning the sale of high-capacity ammunition magazines, requiring a person to be 21 or older in order to purchase a gun and imposing a 3-day waiting period to take a gun home.

Support among Republicans for a series of gun control measures tested in the poll was largely driven by women. On the question of assault-style weapons, 64 percent of women in the party support a ban, while men were divided. 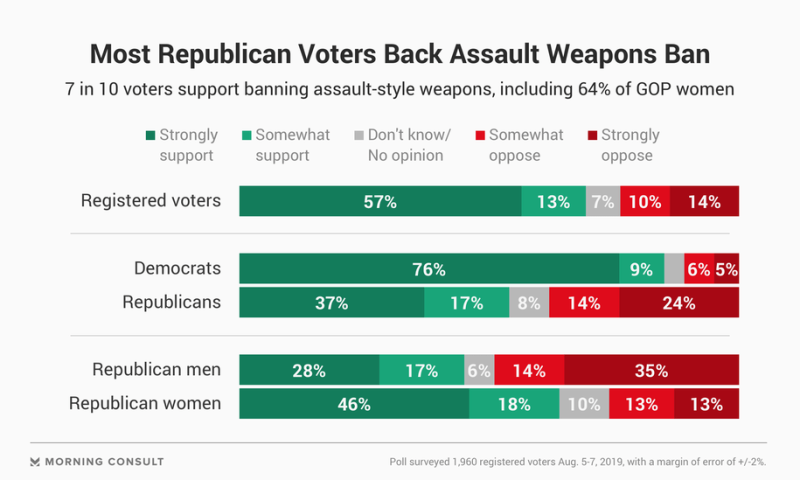 Grind Republicans in Congress to dust … “beat every single one of them.”

In his ads, Joe Biden salutes Front Line Heroes who face the Perils of COVID 19 Everyday

Will Knight and Jonathan Mosher react to the Second Chance Initiative...