Republicans appear to opt for “Plan B,” to do nothing and let it all burn down

Home/COVID-19 & Healthcare, Education, National Elections, National Politics/Republicans appear to opt for “Plan B,” to do nothing and let it all burn down
Previous Next

Republicans appear to opt for “Plan B,” to do nothing and let it all burn down

The U.S. cannot solve its economic crisis until it solves its COVID-19 crisis. There are mitigating measures the U.S. could be taking before a vaccine is developed and becomes widely available, but the Trump administration and far too many governors simply refuse to do it.

The Hill reports, US coronavirus deaths could be in the ‘multiple hundreds of thousands’ if nation doesn’t change course, medical education association warns:

As the U.S. surpasses 150,000 coronavirus deaths since the outbreak first began late last year, deaths across the country could go well into the multiple hundreds of thousands if the nation does not soon change course on its response to the pandemic, according to the Association of American Medical Colleges (AAMC).

The nonprofit organization representing medical schools across the country outlined an 11-step plan in a report this week that the U.S. could adopt to help mitigate the outbreak that has infected more than 4 million Americans.

“Decisive, coordinated action is urgently needed to save lives, end the pandemic, restore America’s economy, and return our lives to normalcy,” the report read. “It is critical that the United States takes a united approach to the pandemic.”

While the AAMC did not say specifically how many more could die if the U.S. doesn’t change course in its coronavirus response, the University of Washington’s Institute for Health Metrics and Evaluation (IHME) estimates 219,864 deaths by Nov. 1.

“Despite working together as a nation to ‘flatten the curve,’ the United States is experiencing troubling new waves of infection,” the report said. “Instead of declining, the number of new cases, hospitalizations, and deaths, especially among vulnerable groups and communities of color, are growing rapidly.”

Our political leaders lack the will and the commitment to do what is required and necessary.

So today the Department of Labor reports that another 1.43 million initial unemployment claims last week, the 19th straight week that the tally exceeded one million, an unheard-of figure before the coronavirus pandemic, and the second straight week of increased number of filings. It is a sign the economic rebound is increasingly at risk with Congress poised to let supplemental $600 assistance payments expire. U.S. Jobless Claims Rise a Second Week in Sign of Growing Risks.

Donald Trump’s bungling of the coronavirus crisis has led to the “most severe” economic downturn in modern history, according to his hand-picked Federal Reserve Chair Jerome Powell.

“The current economic downturn is the most severe in our lifetimes,” Powell said on Wednesday, according to Barron’s. “It will take continued support from both monetary and fiscal policy” to recover.

Despite Trump essentially washing his hands of the virus, Powell said that the economic carnage will not go away until the government adequately deals with the health crisis – something this administration has still failed to do after more than six months.

The New York Times reports today, The U.S. economy’s contraction in the second quarter was the worst on record.

Economic output fell at its fastest pace on record last spring as the coronavirus pandemic forced businesses across the United States to close their doors and kept millions of Americans shut in their homes for weeks.

Gross domestic product — the broadest measure of goods and services produced — fell 9.5 percent in the second quarter of the year, the Commerce Department said Thursday. On an annualized basis, the standard way of reporting quarterly economic data, G.D.P. fell at a rate of 32.9 percent. 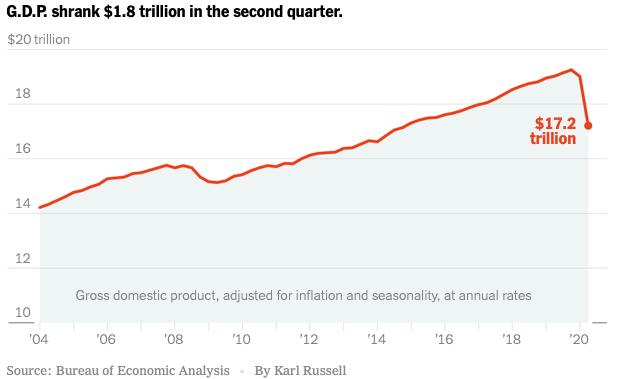 The collapse was unprecedented in its speed and breathtaking in its severity. The only possible comparisons in modern American history came during the Great Depression and the demobilization after World War II, both of which occurred before the advent of modern economic statistics.

With the coronavirus pandemic spreading out-of-control and the economy in collapse, what are President Donald Trump and Mitch McConnell’s Republican Senate doing? Nothing.

And it increasingly appears that Trump and his Republican enablers intend to opt for the GOP’s “Plan B,” to do nothing and let it all burn down.

The prospects for a quick agreement between the Trump administration and congressional Democrats on a new round of aid for the ailing economy faded on Wednesday, as President Trump undercut his own party’s efforts to negotiate a deal and a top White House official declared that a lifeline to unemployed workers would run out as scheduled at week’s end.

With negotiations barely started to find a middle ground between Republicans’ $1 trillion plan and Democrats’ $3 trillion package, Mr. Trump poured cold water on the entire enterprise, saying that he would prefer a bare-bones package that would send “payments to the people” and protect them from being evicted.

“The rest of it, we’re so far apart, we don’t care,” Mr. Trump said before leaving the White House for an event in Texas. “We really don’t care.”

The comments stoked questions about whether the president was willing or able to find a compromise to inject one last dose of stimulus before he faced voters in November.

“We’re nowhere close to a deal,” Mark Meadows, the White House chief of staff, told reporters after leaving talks with top Democrats in the office of Speaker Nancy Pelosi of California. He predicted that a $600-per-week enhanced unemployment benefit would lapse as scheduled on July 31 without any action to restore it.

[M]any Senate Republicans are opposed to additional deficit spending to fuel the economy, meaning that any agreement would need to attract significant support from Democrats to clear Congress.

But with the two sides deeply at odds over how to structure the package and how large it should be, the administration’s outreach to Democratic leaders has failed to produce progress toward a deal.

With time running out, White House officials on Wednesday renewed their calls for a temporary extension of the expiring unemployment insurance benefits and a moratorium on evictions. [Senate Republicans did not include an extension of the eviction moratorium in their $1.1 trillion relief package.] But Democrats quickly rejected that idea, which they have said would only sap momentum for other critical aid — including for states and cities, schools and health care — that must be approved quickly as Americans continue to suffer.

President Donald Trump on Wednesday dismissed Democratic demands for aid to cash-strapped cities in a new coronavirus relief package and lashed out at Republican allies as talks stalemated over assistance for millions of Americans.

Money for states and cites is a crucial dividing line as local governments plead for help to shore up budgets and prevent deeper layoffs as they incur COVID-19 costs and lost tax revenue in shutdown economies.

Trump complained about sending “big bailout money” to the nation’s cities, whose mayors he often criticizes.

“It’s a shame to reward badly run radical left Democrats with all of this money they’re looking for,” he said at the White House.

Democrats proposed nearly $1 trillion for the local governments, but Trump and Republicans are resisting sending the states and cities more cash.

Instead, the GOP offers states flexibility to use $150 billion previously allotted for the virus on other needs. At one point this year, Senate Majority Leader Mitch McConnell, R-Ky., said states could just declare bankruptcy.

No, they can’t under the U.S. bankruptcy code.

Governors and mayors who have been urging Congress to help warned that inaction would hit hard.

Municipal cutbacks and layoffs began in March. By June, about 1.5 million fewer people were working for governments in the U.S. compared with February, according federal data. More than half the government layoffs have been in education, a sector facing daunting costs as schools prepare to reopen to students.

Last month, Moody’s Analytics said states were facing a cumulative budget gap of $312 billion over the next two years and local governments would need nearly $200 billion more. Some estimates have calculated the budget gaps as even bigger.

This represents a pending economic catastrophe, but Donald Trump and Republicans propose to do nothing.

Negotiations on a new coronavirus relief bill hit an impasse on Capitol Hill on Wednesday, leaving no clear path forward even as millions of Americans face a sudden drop in unemployment benefits, and the economy teeters on the brink.

A meeting between top White House officials and Democratic leaders ended with no agreement on extending emergency unemployment benefits that expire Friday or on reviving a moratorium on evictions that lapsed last week. That means some 20 million jobless Americans will lose $600 weekly enhanced unemployment benefits that Congress approved in March, which could send the economy reeling.

After a day of meetings, all parties declared their differences all but irreconcilable. Democrats shot down the idea of a short-term fix for unemployment insurance and the eviction moratorium, which President Trump had announced earlier Wednesday he would support. And the two parties remained far apart on a larger bill, with Democrats standing by their wide-ranging $3 trillion proposal even as Republicans struggled to coalesce around a $1 trillion bill released by Majority Leader Mitch McConnell (R-Ky.) on Monday.

“We are nowhere close to a deal,” Meadows said.

“I don’t know that there is another plan, other than no deal,” said White House Chief of Staff Mark Meadows. “Which will allow unemployment, enhanced unemployment, I might add, to expire. … No deal certainly becomes a greater possibility the longer these negotiations go.”

Paying the price will be the unemployed at a moment of deep uncertainty and fear, with coronavirus cases spiking and states pulling back on reopening as deaths near 150,000 in the United States.

An Extra $600 a Week Kept Many Jobless Workers Afloat. Now What Will They Do? For some, it means hunger, evictions or bankruptcies.

But the stark urgency that faces families perilously close to losing their homes, skipping medical treatments or missing meals because they can’t afford food has not extended to Washington.

Food insecurity for U.S. households last week reached its highest reported level since the Census Bureau started tracking the data in May, with almost 30 million Americans reporting that they’d not had enough to eat at some point in the seven days through July 21. 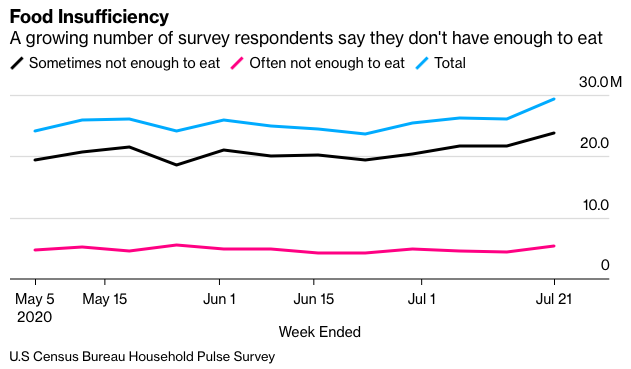 More than 30 million Americans are now at risk of hunger, evictions and bankruptcies, because Republicans choose to do nothing.

To paraphrase Henry II of England regarding Thomas Beckett, “”Will no one rid us of these meddlesome Republicans?” Donald Trump and his meddlesome Republicans must be swept out of office in November if we are ever to recover from the coronavirus pandemic and the economic depression brought on by their utter ignorance, incompetence and indifference to human life. They all must be held accountable for the immense harm they have caused Americans and to this country. Republicans should never again hold elective office.