Home/National Elections, National Politics/Republicans have been using the tired worn out trope ‘socialist’ since FDR
Previous Next

I pointed out the other day that Republicans have absolutely no idea what different political ideologies are, so they randomly assign “bad” words they know they’ve heard somewhere as an invective to describe anyone who does not share their authoritarian views. It is a multiple choice test (choose one): socialist/ communist/ fascist/ Marxist/ Leninist/ Stalinist/ Maoist – and now thanks to Attorney General William “Coverup” Barr, we can add one not used since the Russian Revolution in 1917, “Bolshevik.” Seriously, Dude?

Republicans have been doing this same stupid shit every two years since Franklin Delano Roosevelt ran for president in 1932. It is the most tired worn out trope in American politics.  Essentially it means that the Republicans have “got nothing.”

LA Times business columnist Michael Hiltzik wrote in a column last year, They tried to call FDR and the New Deal ‘socialist’ too. Here’s how he responded:

The term “socialism” has been enjoying something of a vogue lately, typically used to describe policies that were part of American mainstream politics as recently as the 1980s.

For example, listen to Donald Trump, in his State of the Union address on Feb. 5: “Here, in the United States, we are alarmed by new calls to adopt socialism in our country…. Tonight, we renew our resolve that America will never be a socialist country.”

The opening for Trump’s remark was provided by politicians such as Rep. Alexandria Ocasio-Cortez (D-New York). She describes herself as a “democratic socialist,” even though in historical terms her actual policies are resoundingly moderate.

That includes her suggestion that the wealthy pay their fair share in taxes, say 70% of all income over $10 million a year — a tax burden on the rich that’s actually much lower than those of 1981 or the prosperous 1950s, accounting for inflation.

Conservatives have attempted to tack “socialism” on policies that today enjoy majority support, such as universal health coverage (supported by 70.1% of respondents in a recent Reuters/Ipsos poll) or free college tuition (supported by 60%). 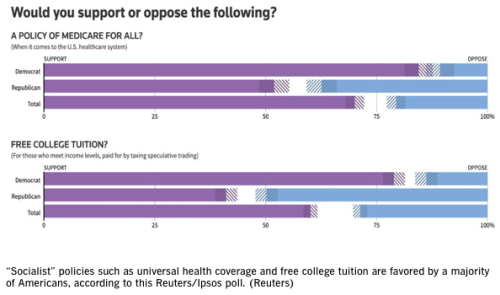 The truth is that the “socialism” taunt is among the oldest and most discreditable of political chestnuts. It’s been used by conservatives to smear Democratic or progressive policies they don’t like (which is most of them) since the 1930s, more than a decade after the Socialist Party of America last fielded Eugene V. Debs as a presidential candidate.

The high-water mark of conservatives’ “socialist” battle cry probably was reached in January 1936, during a remarkable political event at the Mayflower Hotel in Washington, D.C.

This was a gala dinner sponsored by the American Liberty League, a splinter group of wealthy business leaders and old-guard Democrats formed in 1934 in opposition to Franklin Roosevelt and the New Deal. The glittering star of the Mayflower gala was former New York Gov. Al Smith, who had thrown in his lot with the plutocrats after a distinguished career in which he became an icon of progressive Democratic politics.

As I recounted in my book “The New Deal: A Modern History,” Smith’s apostasy perplexed and unnerved Democrats — after all, FDR, Smith’s successor as governor, had been the man who placed his name in nomination for president at the Democratic convention in 1928 and had bestowed on Smith his nickname, “the happy warrior.”

Whether Smith harbored personal resentments over the rise of a man who had been his protege, or was merely dazzled by his rich new friends, he now was at full-scale war with FDR. It was a delicate moment for the New Deal. FDR’s popularity had fallen to about 50%, a low point. Business was pushing back against his programs. Roosevelt’s image as a traitor to his class was reinforced by his proposed Revenue Act of 1935, which was openly aimed at the wealthy and was passed largely intact. An attack on Social Security, enacted in 1935, would become the central theme of the presidential campaign of Republican Alf Landon in 1936. (Landon got shellacked.)

The Liberty League had a solid pedigree from the Wall Street wing of the Democratic Party, including John J. Raskob, a former party chairman and an executive of DuPont. The league’s board of directors bristled with DuPont family members and executives of big corporations such as General Motors. FDR witheringly described the league to reporters as “an organization that only advocates two or three out of the Ten Commandments…. [They] say you shall love God and then forget your neighbor.”

Roosevelt struck back at the league in his State of the Union message in early January 1936, reminding his listeners that his program had sought “the adjustment of burdens, the help of the needy, the protection of the weak, the liberation of the exploited and the genuine protection of the people’s property.” As a result, he said, “we have earned the hatred of entrenched greed…. [B]ut now … they seek the restoration of their selfish power.”

Everyone was on tenterhooks to hear how Smith would respond as the keynote speaker of the league gala on Jan. 25, to be broadcast on a national radio hookup. Mounting the podium in white tie and tails, the former hero of the rank-and-file worker fulfilled his hosts’ expectations.

As for Roosevelt’s “young brain trusters,” he said, “it is all right with me if they want to disguise themselves as Karl Marx or Lenin or any of the rest of that bunch, but I won’t stand for allowing them to march under the banner of Jackson or Cleveland…. There can be only one capital. Washington or Moscow. There can be only one atmosphere of government, the clear, pure, fresh air of free America, or the foul breath of communistic Russia. There can be only one flag, the Stars and Stripes or the flag of the godless Union of the Soviets.”

FDR was thunderstruck. “Practically all the things we’ve done in the Federal Government are like things Al Smith did as Governor of New York,” he told his Labor secretary, Frances Perkins. “They’re things he would have done if he had been President of the United States. What in the world is the matter?”

It wasn’t lost on Smith’s former political compatriots that he had made common cause with people who would never have tolerated anyone so common in the White House. (They demeaned his Catholic upbringing, too.) Hiram Johnson, the progressive Republican senator and former governor from California, reacted to the display with contempt. “The Liberty League, with its setting of millions upon millions, with shirt-front respectability militantly displayed, and with a boy from the side-walks of New York and the East side in the role of the hero and savior of wealth and entrenched dishonesty, really put on a good show,” he wrote sourly to his son, Hiram Jr.

But Roosevelt had the last laugh, bitter as it was. He unearthed a speech from the 1928 campaign in which Smith had ridiculed the same charge of “socialism” from Republicans that he now leveled against Roosevelt.

On that occasion, Smith had said: “The cry of socialism has been patented by the powerful interests that desire to put a damper on progressive legislation. Is that cry of socialism anything new? Not to a man of my experience. I have heard it raised by reactionary elements and the Republican party … for over a quarter century.” (circa 1900).

And now that cry of “socialism” is back. It’s a tattered label, as anyone can tell by noting that the policies it’s applied to have been standard elements of Democratic and Republican platforms for decades. Harry Truman proposed comprehensive healthcare reform, including a national, universal health insurance program, in 1945. (The American Medical Assn. killed it by smearing it as “socialized medicine.”)

It’s often said of those old rates that no one paid them, because the rich had access to all sorts of loopholes. Here’s a dirty little secret: No one pays the top rate today, either, even though it’s only 37%. The wealthy still have plenty of loopholes, the biggest of which is the preferential maximum rate of 23.8% on capital gains.

In other words, Ocasio-Cortez’s suggestion of a 70% rate on income over $10 million is modest to its core, any way you cut it. “Democratic socialist”? Compared with what taxpayers of the 1950s and 1960s faced, she’d be proposing a tax cut, making her indistinguishable from a Republican.

The lesson is to be wary of anyone tossing around the term “socialist” lightly. If they really think these proposals are socialist, they need to take that up with the shade of President Eisenhower.

Hiltzik’s column leaves out FDR’s Address announcing the Second New Deal on October 31, 1936 in Madison Square Garden, on the eve of the election. FDR directly addressed the wealthy plutocrat Republicans who were hellbent on destroying the New Deal during the Great Depression that their failed economic policies created. (Portion of speech).

For nearly four years now you have had an Administration which instead of twirling its thumbs has rolled up its sleeves. And I can assure you that we will keep our sleeves rolled up.

We had to struggle with the old enemies of peace–business and financial monopoly, speculation, reckless banking, class antagonism, sectionalism, war profiteering.

Never before in all our history have these forces been so united against one candidate as they stand today. They are unanimous in their hate for me–and I welcome their hatred.

Unfortunately, “the old enemies of peace–business and financial monopoly, speculation, reckless banking, class antagonism, sectionalism, war profiteering” are still with us, and still “consider the Government of the United States as a mere appendage to their own affairs” some 84 years later. The more things change, the more they stay the same.