In the Americans’ most difficult test of the month-long competition, Megan Rapinoe converted a penalty kick in the 61st minute after video replay overruled the referee’s initial decision.

There was no controversy eight minutes later. Rose Lavelle, the Washington Spirit midfielder who at age 24 enjoyed a breakout tournament, doubled the lead with an assertive run and 17-yard shot before a pro-U.S. sellout crowd at Stade de Lyon.

Rapinoe won the Golden Boot as the tournament’s top scorer and the Golden Ball as its top player. Alex Morgan won the Silver Boot.

The Americans have won 13 straight matches and are unbeaten in 16 since losing a friendly at France in January.

Next goal, the gold medal at the 2020 Summer Olympics in Tokyo, Japan.

A victory parade is tentatively scheduled for Wednesday on the streets of Manhattan. 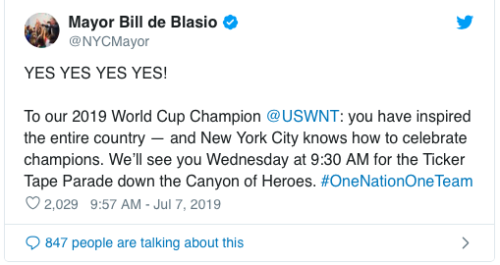 In women’s sports, the United States Women’s Soccer Team is a dynasty on par with the New York Yankees in baseball, the New England Patriots in football, and the Boston Celtics in basketball. These women are deserving of equal respect for their unparalleled excellence and achievement in sport.

In fact, the women’s soccer games have generated more revenue than the men’s over the past three years, as CNBC points out. From 2016 to 2018, women’s games generated $50.8 million in revenue, compared with $49.9 million for the men’s matches.

According to the New York Times, the prize money for this year’s Women’s World Cup is $30 million. The men’s 2018 World Cup for men had $400 million.

So, after their win on Sunday, the crowd and internet erupted, calling out the disparity and supporting the women’s team in their fight for better treatment.Videos capture the stadium ringing with calls for “equal pay” as FIFA President Gianni Infantino walked onto the field to greet the winning team.

On Friday, Infantino had proposed doubling the prize money for women who play in the World Cup, but it would still be far less than the men’s purse.

Nike released this ad in honor of the United States Women’s Soccer Team win as an inspiration to the future generations of female athletes and young girls who aspire to be champions like the women on this championship team.