Well that didn’t take long. The day after the election, the Republican Governor’s Association (RGA) was on the air with an attack ad against Democratic gubernatorial candidate Fred DuVal. The RGA would have you believe that Fred DuVal is single-handedly responsible for tuition increases at Arizona colleges during his tenure as a regent on the Arizona Board of Regents. (By the way, the Governor is an ex-officio member of the Arizona Board of Regents. Ariz. Const. Art. 11, Sec. 5).

The ad requires Arizonans to erase from their memories the recent history of our Tea-Publican controlled Arizona legislature making  devastating budget cuts to higher education over the signature of Gov. Jan Brewer since the start of the Bush Great Recession in 2007.

Here are some helpful reminders for those of you who suffer from short-tern memory loss, from The Atlantic. A Truly Devastating Graph on State Higher Education (March 20, 2013):

The chart below from the Center On Budget and Policy Priorities estimates how much each of the 50 states has slashed per-student funding for its university systems since the start of the recession, adjusted for inflation. In Arizona, where the cuts were the deepest, funding has been hacked in half. Nationwide, legislatures have sliced off 28 percent on average. 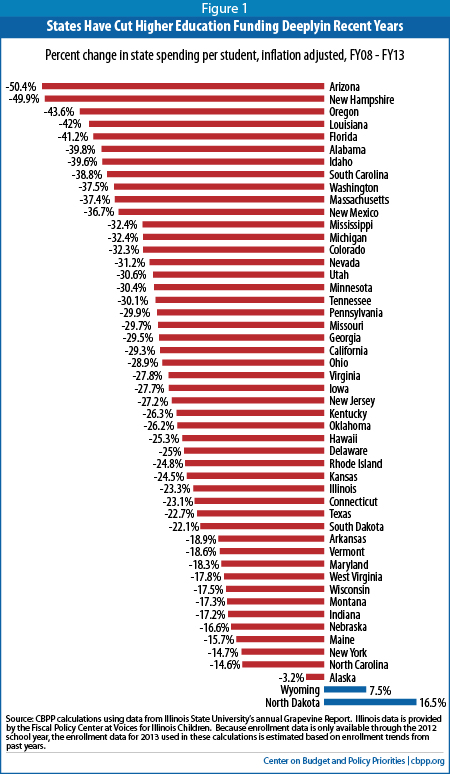 These cuts aren’t the only reason the cost of a public education has jumped in the last several years, but they’re an essential part of the story. As the CPBB notes, there have been some truly astronomical tuition increases since 2008 — with the sticker price of school rising more than 50 percent in seven different states. 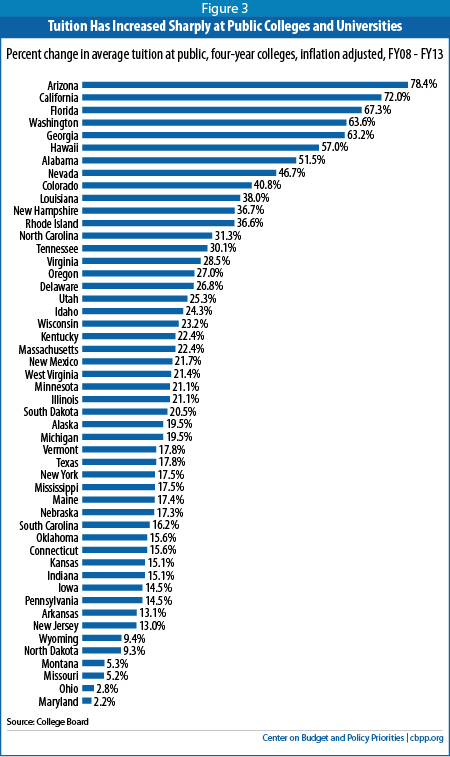 In January, using the same data as the CPBB, I charted the changes in total funding in each state, without accounting for inflation or changes in enrollment. By that measure, 38 states had cut their higher-ed budgets over the past five years. In Arizona, where the budget tightening was again most severe, funding fell by 36 percent.

The Tea-Publican controlled Arizona Legislature failed to fund higher education in direct violation of its constitutionally prescribed duties under Ariz. Const. Art. 11, Sec. 6: “The university and all other state educational institutions shall be open to students of both sexes, and the instruction furnished shall be as nearly free as possible“; and under Ariz. Const. Art. 11, Sec. 10: “[T]he legislature shall make such appropriations, to be met by taxation, as shall insure the proper maintenance of all state educational institutions, and shall make such special appropriations as shall provide for their development and improvement.”

“I’m a Republican and I need to correct the record about this highly inaccurate political attack on Fred DuVal,” said Mariucci. “I worked by Fred’s side to save our public universities when the Arizona legislature decimated higher education during the Great Recession. They cut our public universities deeper than any state in the country, forcing tuition increases on Arizona students.

“Fred and I personally developed the formula requiring the universities to reduce costs before raising tuition, and Fred was always the loudest voice in the room to protect students from unnecessary tuition hikes. To cast him in any other light is just wrong.”

Mike Pence in charge of coronavirus pandemic? God save us from these incompetent fools

Shea Stanfield wants to restore the Arizona Corporation Commission as the...

Arizona Republicans are on the Wrong Side of the Gun Issue...

Reject the Politics of Fear