Ring the bell, recess is over. This is a war to save our democracy.

Home/AZ Congressional Delegation, AZ Elections, AZ Politics, National Elections, National Politics/Ring the bell, recess is over. This is a war to save our democracy.
Previous Next

Ring the bell, recess is over. This is a war to save our democracy.

Politico reports that Speaker Nancy Pelosi and House Democratic leaders are considering cutting short the August recess and bringing the chamber back into session to deal with the unfolding crisis at the U.S. Postal Service. Pelosi weighs bringing House back early to address Postal Service crisis:

The House could return to vote with the next two weeks, the Democratic sources suggested. The chamber is currently in recess, with no votes scheduled until the week of Sept. 14.

Democrats are looking to address organizational issues at the Postal Service in the coming weeks, not to provide additional funding at this time, according to sources familiar with the discussion.

House Democrats included $25 billion for the USPS in the HEROES Act in May, along with an additional $3.6 billion in election security funding. The Senate has failed to consider the bill.

One option would be to vote on a modified version of a bill introduced by House Oversight Chair Carolyn Maloney (D-N.Y.) earlier this week that would prohibit USPS from implementing a planned organizational overhaul that critics maintain would handicap mail-in voting.

President Trump is willing to delay mail – medicines, paychecks, absentee ballots – to countless Americans for his own selfish ends. @HouseDemocrats are going to do everything we can to stop this. #DontMessWithUSPS pic.twitter.com/DR9NwxxN0q

On Friday, Pelosi and Senate Minority Leader Chuck Schumer (D-N.Y.) issued a scathing statement accusing President Donald Trump and Republicans of waging an “all-out assault on the Postal Service and its role in ensuring the integrity of the 2020 election.” Their statement came after Trump said he opposes a federal infusion of funds to save the flailing postal service because he doesn’t support mail-in voting.

“The President made plain that he will manipulate the operations of the Post Office to deny eligible voters the ballot in pursuit of his own re-election,” Pelosi and Schumer said. “The President’s own words confirm: he needs to cheat to win.”

Trump has suggested that he’s opposed to giving more money to the Postal Service because of the expected wave of millions of mail-in ballots in November due to the coronavirus pandemic.

He has also offered strong praise for Louis DeJoy, a businessman and Trump donor who was recently appointed postmaster general. Democrats have suggested DeJoy is revamping the Postal Service’s operations to aid Trump’s reelection campaign.

David Plouffe, the mastermind behind Barack Obama’s historic 2008 presidential campaign who later became a Senior Advisor to the President, is urging Democrats to take action to stop President Donald Trump’s attacks on the United States Postal Service. Top Obama advisor urges Dems to ‘go to war for our country’ over Trump USPS attack:

“We’ve never needed Democrats in Congress more than we do now,” Plouffe writes. “The whole enterprise is on the line. The Biden campaign has no oversight or fiscal power. Neither does the press. Letters, statements, outrage are not enough. Time to go to the mattresses. Now.”

1) Prime time hearings, now.
2) Subpoenas to Trump WH and camp officials. This is a RICO case
3) Visit local post offices with cameras – show people what is happening.
4) Events with those getting Rx late
5) Involve governors
5) No rest, no vacation. Go to war for our country.

Citing to the 1974 U.S. Supreme Court case O’Brien v Skinner, Tribe said that the Equal Protection Clause “invalidates state rules that make arbitrary distinctions between voters who can get their absentee ballots counted and those who can’t.” Thus, if two people in a state mail their ballots on the same day, one of those votes cannot be counted while the other is invalidated because they were delivered at different times.

Note: In Arizona your ballot must be received by 7:00 p.m. on election day. This is the law that Professor Tribe says violates the 14th Amendment.

According to Tribe, the Constitution requires that states enact postmark rules – meaning all mail-in ballots must be dated and cannot be invalidated if sent before the election deadline.

“This means a state that doesn’t adopt a postmark rule violates the 14th Amendment rights of voters who aren’t assured they’ll receive their absentee ballots in time to have them counted by November 3,” he wrote. “Voters in those 34 states should ask the ACLU to help them get injunctions to prevent that predictable violation of their rights, putting pressure on such states to adopt a postmark rule or otherwise cure the violation.” 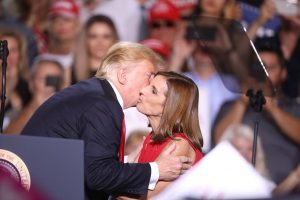 Republican members of the Senate and Congress have remained largely silent about this Postal Service scandal. Silence is complicity. It is time for liberal activist groups and voting rights groups to turn up the heat on Republican legislators, and state attorneys general.

Thanks to COVID-19, it may not be possible to stage sit-ins at the local offices of Republican senators and congressional members, but there is nothing to prevent street protests outside of their offices on the sidewalks.

And there is nothing preventing you from flooding their offices with phone calls and messages demanding that they return to Washington to fund the postal service and to protect your right to vote by mail safely and securely.

There should be loud daily protests at the Arizona Attorney General’s office in Phoenix until that partisan hack decides to act on the Secretary of State’s request for an investigation.

There is no time for this antiquated notion of an August recess. Ring the bell, recess is over. This is a war to save our democracy from an authoritarian, anti-majoritarian and anti-democratic Republican Party openly and shamelessly engaged in a scheme to steal an election. This is an all hands on deck moment for true American patriots.