1968 was one of the most godawful, horrible, miserable years in U.S. history. It changed who we are as Americans, and “fueled a general sense that the nation had gone mad; that the normal rules and constants of politics could no longer be counted on.” How Robert Kennedy’s Assassination Changed American Politics.

The Tet Offensive at the end of January stunned both the U.S. and South Vietnamese armies, causing them to temporarily lose control of several cities and the U.S. embassy in Saigon.  It had a profound effect on the U.S. government and shocked the U.S. public, which had been led to believe by its political and military leaders that the North Vietnamese were being defeated and incapable of launching such an ambitious military operation.

A month later, Walter Cronkite reported on his recent trip to Vietnam to view the aftermath of the Tet Offensive in his television special Who, What, When, Where, Why? He chastised American leaders for their optimism, and advised negotiation “… not as victors, but as an honorable people who lived up to their pledge to defend democracy, and did the best they could.” American support for the war declined.

In February, Richard M. Nixon (R-CA) declared his candidacy for the presidency. In March, Sen. Eugene McCarthy (D-MN) and his “children’s crusade” nearly defeated President Lyndon Johnson in the New Hampshire Democratic primary. Days later, Sen. Robert F. Kennedy (D-NY) declared his candidacy for president. By the end of March, President Johnson delivered his Address to the Nation Announcing Steps To Limit the War in Vietnam and Reporting His Decision Not To Seek Reelection. His Vice President, Hubert H. Humphrey, would run in his stead.

On April 4, the Rev. Dr. Martin Luther King, Jr.  was assassinated in Memphis, Tennessee. Sen. Kennedy, hearing of the murder just before he was to give a speech in Indianapolis, IN, delivered a powerful extemporaneous eulogy in which he plead with the audience (right) “to tame the savageness of man and make gentle the life of this world.”

In May, the U.S. and North Vietnamese delegations agreed to begin peace talks in Paris. (While it was never publicly disclosed at the time, it was known to President Johnson from U.S. intelligence sources that Richard Nixon’s campaign later scuttled the peace talks, which he feared could give his opponent, Vice President Hubert H. Humphrey, an edge in the 1968 election. On Oct. 22, 1968, Nixon ordered Haldeman to “monkey wrench” the initiative. Nixon’s Vietnam Treachery. The conduit was Anna Chennault, a Republican doyenne and Nixon fund-raiser, and a member of the pro-nationalist China lobby.)

On the night of the California Primary, June 4, Robert Kennedy addressed a large crowd of supporters at the Ambassador Hotel in Los Angeles. He had won victories in California and South Dakota and expressed confidence that his campaign could go on to unite the many factions stressing the country.

He would never get the chance. As he left the stage, at 12:13 a.m. on the morning of June 5, Sen. Kennedy was shot by an assassin, Sirhan Sirhan, a 24 year old Jordanian living in Los Angeles.

Robert Kennedy’s casket was flown to New York, and transported by train from New York to Washington, D.C. All along the route, Americans lined the tracks to pay their last respects (video) and to mourn his death. 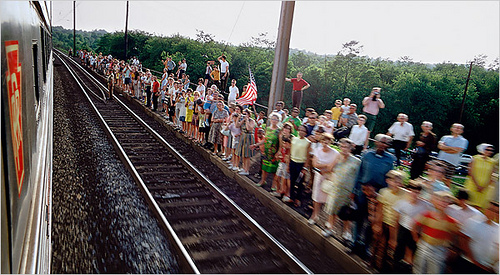 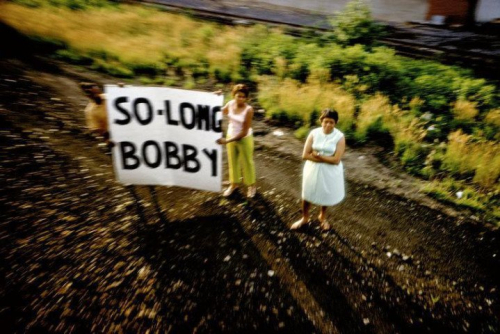 Days later, his youngest brother Edward Kennedy delivered a powerful eulogy for his brother, which concluded with these moving words:

My brother need not be idealized, or enlarged in death beyond what he was in life; to be remembered simply as a good and decent man, who saw wrong and tried to right it, saw suffering and tried to heal it, saw war and tried to stop it.

Those of us who loved him and who take him to his rest today, pray that what he was to us and what he wished for others will some day come to pass for all the world.

As he said many times, in many parts of this nation, to those he touched and who sought to touch him:

Abraham, Martin and John (Youtube) is a 1968 song written by Dick Holler and first recorded by Dion. It is a tribute to the memory of four assassinated Americans, all icons of social change: Abraham Lincoln, Martin Luther King Jr., John F. Kennedy, and Robert F. Kennedy.

For those of you who have Netflix, it has been airing an excellent documentary series, Bobby Kennedy for President. 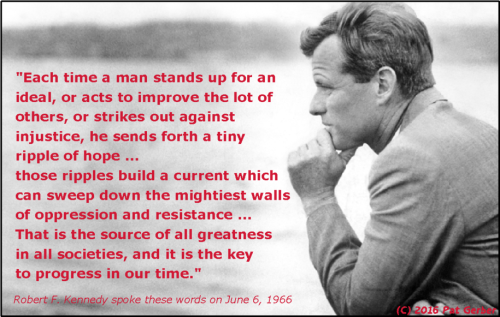