Rudy “a noun, a verb and 9/11” Giuliani to be the keynote speaker at GOP convention

Home/AZ Politics/Rudy “a noun, a verb and 9/11” Giuliani to be the keynote speaker at GOP convention
Previous Next

Rudy “a noun, a verb and 9/11” Giuliani to be the keynote speaker at GOP convention 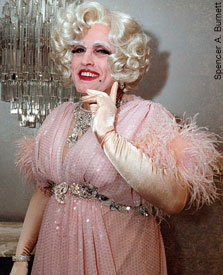 The GOP has selected former New York Mayor Rudy "a noun, a verb and 9/11" Giuliani, and notorious cross-dresser (yes, that really is him), to be the keynote speaker at the Republican National Convention in St. Paul, MN.

Interesting choice.  I assume that it is in keeping with the GOP fear mongering tactics of Karl Rove to try to scare Americans into voting against their own self interests by voting for Republicans.  (If Rudy comes out wearing this dress, he will certainly scare Republicans alright!) Rudy will probably tear up a copy of the Bill of Rights in a moment of political theater to try to convince us that we must give up our constitutional liberties for the promise of security in the kind of police state that he once tried to impose in New York City.

But let’s take a closer look at Rudy.  "As New York mayor, Rudy Giuliani billed obscure city agencies for tens of thousands of dollars in security expenses amassed during the time when he was beginning an extramarital relationship with future wife Judith Nathan in the Hamptons." Giuliani billed obscure agencies for trips  Rudy also provided a police driver and city car for his mistress Judith Nathan.  "She used the PD as her personal taxi service," said one former city official. Giuliani’s Mistress Used N.Y. Police as Taxi Service

Rudy has been married three times, the first time to his second cousin, Regina Perrugi, a marriage that was annulled after 14 years of marriage.  His second wife and mother of his children, Donna Hanover, was forced to go to court to keep his mistress Judith Nathan out of the mayoral mansion while the Giuliani family still lived there.  And who can forget that Rudy announced to Donna that he wanted a divorce during a televised press conference! The Women In Giuliani’s Life, Donna… Judith… Cristyne…  Rudy’s philandering ways estranged him from his two children. Giuliani Estranged From His 2 Children  This says "GOP family values hour" to me.

Adultery in the military is prosecuted under Article 134 of the Uniform Code of Military Justice (UCMJ), which is also known as the "General Article." Article 134 prohibits conduct which is of a nature to bring discredit upon the armed forces, or conduct which is prejudicial to good order and discipline. The Manual for Court Martial (MCM) expands article 134 into various "sub-articles." One of these "sub-articles" covers the offense of adultery (Article 134, paragraph 62).

I guess being the son and grandson of Navy Admirals meant that the UCMJ did not apply to John McCain. Someone who was not a "legacy" appointment from an elite Navy family and not as well connected politically as McCain might have been drummed out of the Navy for his adulterous affairs.

In the recent CNN McCain Revealed (below), John McCain kept "a secret" that he was cheating on his wife Carol and that "I lied" to Cindy about my age.  McCain was still married to Carol at the time. (McCain lied in his biography that he was separated from Carol before he met Cindy). Cindy’s response to a question about their extramarital affair was: "At the time I really didn’t understand what they were saying because my husband [McCain] had been separated and he, you know six and a half years it was a long separation… his reasons are his reasons." There’s a bit of revisionist history in there. And Cindy didn’t find anything morally objectionable to having an affair with a married man?

If this is to be the next "first family" to occupy the White House, then I suppose Rudy Giuliani makes perfect sense as McCain’s choice for keynote speaker at the Republican National Convention.  The Republican Party just ain’t what it used to be; or maybe it never really was.