Donald Trump ruins everything. Trump Hijacks the 4th of July:

Apparently underwhelmed by the way the nation’s capital has celebrated in years past — key events include the National Independence Day Parade down Constitution Avenue, a free concert on the West Lawn of the Capitol and fireworks over the National Mall — President Trump is injecting himself into the celebration.

Plans by President Trump to reshape Washington’s Independence Day celebration now include an area in front of the Lincoln Memorial reserved for dignitaries, family and friends that will be accessible only through tickets distributed by the White House.

UPDATE: The White House is distributing tickets for President Trump’s July Fourth speech on the Mall to Republican donors and political appointees, prompting Democratic lawmakers to question whether the administration’s planned celebration violates federal ethics rules. “Limiting public access to a public monument on Independence Day in favor of wealthy donors just sends a signal that our political system favors the wealthy and well-connected,” said Brendan Fischer, who directs federal reform for the Campaign Legal Center.

The VIP section will stretch roughly from the steps of the memorial to the midpoint of the reflecting pool, according to the U.S. Secret Service. It is in front of the spot from which Trump plans to address the nation as part of his rebranding of the traditional July 4 event into his own “Salute to America,” which includes moving the fireworks from the reflecting pool to two different sites, including West Potomac Park.

The revamped festivities will include additional fireworks, military bands and flyovers by Air Force One, the Blue Angels and aircraft from all branches of the military.

“Oooh, and tanks! I’ve got to have thanks, like my pals Vladimir Putin and Kim Jong Un have in their parades!” Trump asks for military tanks on the Mall as part of grandiose July Fourth event:

The ongoing negotiations over whether to use massive military hardware, such as Abrams tanks or Bradley Fighting Vehicles , as a prop for Trump’s “Salute to America” is just one of many unfinished details when it comes to the celebration planned for Thursday, according to several people briefed on the plan, who requested anonymity to speak frankly.

Trump has demonstrated an unusual level of interest in this year’s Independence Day observance, according to three senior administration officials. He has received regular briefings about it from Interior Secretary David Bernhardt, according to the people briefed on the plan, and has weighed in on everything from how the pyrotechnics should be launched to how the military should be honored.

The type of armored tactical vehicles under consideration for this year’s Fourth of July celebration can weigh 60 tons or more, and some, such as Abrams tanks, have tracks that can be particularly damaging.

Asked about the discussions about using armored vehicles and the projected overall costs of the event, Interior officials also declined to publicly comment.

I’m sorry, but NO. This is an abomination of what has been a nonpartisan celebration of America’s birthday for many decades. President’s have never been a participant in, let alone made themself the center of attention, in America’s July 4th celebration.

Margaret Sullivan describes the tradition of “A Capitol 4th” that we have all come to know and love. We, the people, have been celebrating July Fourth for decades. That’s how it should be.

“HOLD THE DATE! We will be having one of the biggest gatherings in the history of Washington, D.C., on July 4th. It will be called ‘A Salute To America’ and will be held at the Lincoln Memorial. Major fireworks display, entertainment and an address by your favorite President, me!”

Hogwash. No need to hold the date or reframe and rename. Absolutely no need for an address. We, the people, have been celebrating our nation’s birthday on the Mall for decades. That’s how it should be.

When the District’s Fourth of July fireworks started is unclear. Our friend Jerry remembers as a boy going to the Mall with his parents in the late 1930s. To get seats, they went early. The kids set off firecrackers waiting for the dark and pyrotechnics. He describes a Niagara Falls of detonations sparkling along the ground near the Washington Monument.

In the wartime early 1940s, another friend, Peg, watched the fireworks from her roof at 14th and U Streets NW. According to The Post, the first televised Fourth of July, in 1947, featured military bands and fireworks. Thousands gathered on the Mall. More watched around the country, as they watch “A Capitol Fourth” now, linking us across the nation.

A 1957 snapshot of our family’s first of many Independence Day picnics near or on the Mall is fading somewhere in a drawer but is fresh in memory. Eleven-month-old son Jerry, now almost 63, grins broadly, bolt upright in his stroller, waving his arms. His grandmothers sit on a blanket spread on a slope of grass. We had finished our picnic — fried chicken, deviled eggs, possibly cucumber sandwiches, brownies, iced tea. Other families picnic nearby, all of us with a ringside view beside the Jefferson Memorial, celebrating together, waiting for the fireworks. Like thousands of area residents, we had gathered in the city’s and the nation’s front yard to be there.

In the 1980s, after the National Symphony Orchestra began concerts on the West Lawn of the Capitol, we started driving there, most of us disgorging from the car with a picnic basket to stake out a place near the stage. My husband would then park the car near the State Department and return by Metro to find us in the gathering throng. Our picnic eaten, when the orchestra struck up the “1812 Overture” and the first rocket burst near the Washington Monument, we were packed and ready to walk the length of the Mall under sprays of reds and whites and blues, zigzagging through the seated crowds. On those steamy summer nights, folks waded in the Reflecting Pool and filled the Lincoln Memorial steps. The Mall was crammed from one end to the other, everyone enjoying the oneness of time and place, being Americans together.

In the late 1990s, by the time our legs began to give out, we were living in a condominium on the Virginia side of the Potomac. The balcony had a view of the Capitol and the Washington Monument, ideal for an annual potluck with the Capitol Fourth on the television and the sky bursting with fireworks. Not just the slam-bam Mall ones, but spraying across the skyline tens of community celebrations, all of us connected as we, the people, in the national birthday spirit.

One year stands out, epitomizing the essence of celebrating the Fourth and of its unique quality that should not be lost in reframing. As a Foreign Service family, we had been abroad for nine years and transferred home in late June 1976 in time to celebrate the Bicentennial. The previous years of antiwar protests and Watergate had been tense and divisive — polarizing and tribal. Not like now, but not unlike, either.

We packed a picnic — fried chicken, lemonade, a bottle of wine, the usual — and found a place on a grassy verge on the Virginia side of the Potomac, sharing food with the strangers sitting around us. Someone’s radio broadcast the National Symphony playing “The Star-Spangled Banner.” Everyone stood and sang. As fireworks burst above us, we “ooh-ed” and “ahh-ed.”

Overflowing the Mall onto the hillside, a million of us (the largest Capitol Fourth recorded) basked in the connection of being in a special place at a special time, of belonging to one nation, of being one people, for at least that day setting disagreements aside.

The Fourth of July birthday celebration had been, was then, is now Washington’s, America’s, We, the people’s. Everyone welcome, including the White House family if they choose to join simply as part of us. No renaming or reframing. The date was saved 243 years ago.

There are traditions and values that must be preserved and celebrated as intended by our Founding Fathers. It does not need to be “rebranded” by a vulgar bad reality TV show actor/producer who thinks he can make it better by inserting himself. John Adams in a letter to his wife Abigail wrote:

The Second Day of July 1776, will be the most memorable Epocha, in the History of America.

I am apt to believe that it will be celebrated, by succeeding Generations, as the great anniversary Festival. It ought to be commemorated, as the Day of Deliverance by solemn Acts of Devotion to God Almighty. It ought to be solemnized with Pomp and Parade, with Shews, Games, Sports, Guns, Bells, Bonfires and Illuminations from one End of this Continent to the other from this Time forward forever more.

You will think me transported with Enthusiasm but I am not. — I am well aware of the Toil and Blood and Treasure, that it will cost Us to maintain this Declaration, and support and defend these States. — Yet through all the Gloom I can see the Rays of ravishing Light and Glory. I can see that the End is more than worth all the Means. And that Posterity will tryumph in that Days Transaction, even altho We should rue it, which I trust in God We shall not.

Historical Note: One of the most widely held misconceptions about the Declaration of Independence is that it was signed on July 4, 1776. In fact, independence was formally declared on July 2, 1776, a date that John Adams believed would be “the most memorable epocha in the history of America.” On July 4, 1776, Congress approved the final text of the Declaration. It was not actually signed until August 2, 1776.

The John Trumbull painting that most Americans think of as the signing of the Declaration of Independence actually depicts the five-man drafting committee presenting their draft of the Declaration to the Congress, an event that took place on June 28, 1776, and not the signing of the document, which took place much later. Much of what you think you know about American history is mythology. 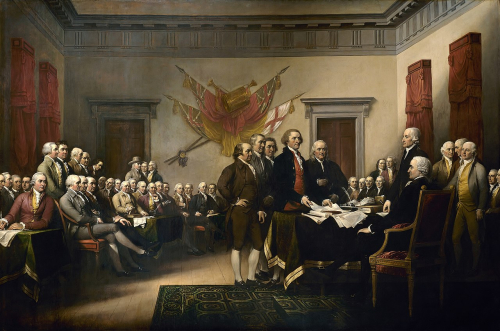