School ‘vouchers for all’ bills scheduled to be heard beginning Thursday

School ‘vouchers for all’ bills scheduled to be heard beginning Thursday 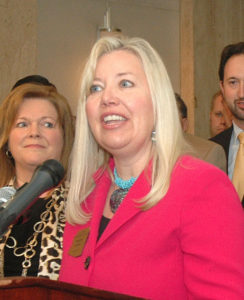 Republican lawmakers in the Arizona Legislature are attempting to fast-track a plan to eventually offer vouchers to every public-school student and, in separate legislation, privatize oversight of the public money given to parents to pay private-school tuition and other expenses.

Beginning Thursday, the Legislature will train its sights on the plan to broaden eligibility for Empowerment Scholarship Accounts, a school-choice program created six years ago for disabled children. Under the legislation, all of Arizona’s 1.1 million students would be eligible for the program by 2020.

Sen. Debbie Lesko, of Peoria (above), and Rep. John Allen, of Scottsdale, have introduced identical bills to expand the program in their chambers, a move intended to expedite passage. ESAs allow families to use public-school dollars on private-school tuition and other educational expenses.

ESAs would be offered to four grades in 2017-18 and incrementally to all public-school students by 2020-21. The first hearing on the expansion bills will be Thursday at 9 a.m. by the Senate Education Committee.

Senate Republicans have also introduced another bill that would privatize oversight of the program and force the state Department of Education to deposit money into ESA accounts as soon as the parent agrees to the terms of the program. 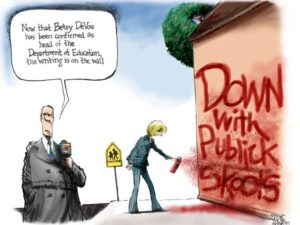 The proposal comes as the school-choice movement has been thrust into the national spotlight, as one of its chief advocates nationally, Betsy DeVos, was confirmed this week as U.S. Education secretary.

Arizona Republicans say their effort to expand the program may be buoyed by the confirmation of DeVos, a Michigan billionaire whose organization until recently advocated for the voucher-style program here and elsewhere. The group, American Federation for Children, sought to influence state legislative races for candidates it deemed supportive of its agenda, and is advising Republican Sen. Steve Smith, of Maricopa, on his legislation to change the way the ESA program runs.

Republicans also note their support last year of Proposition 123, which puts $3.5 billion over 10 years into public schools. They abandoned an effort to expand ESAs last year, in part because it interfered with the governor’s desire to garner voter support for Prop. 123, which settled a long-standing lawsuit over state leaders’ underfunding of schools during the recession.

Senate President Steve Yarbrough, a pro-school-choice Republican, said the political climate is now favorable to phasing in an expansion of the program.

Remember, Sen. Steve Yarbough is Arizona’s most corrupt state senator who uses his position to write charter school bills to steer state funding to his Arizona Christian School Tuition Organization in order to benefit himself financially. Sen. Steve Yarbrough makes out like a …legislator … on tax-credit tuition program; Outlook for the ‘next step’ in public education funding is not good.

The expansion legislation renews the long-standing debate over how far Arizona should go in allowing parents to use tax money to customize their kids’ education through private schooling, therapy, homeschooling, tutors, college savings, and other programs outside traditional public district schools.

Critics also say state leaders should instead focus on putting more money into public schools, through teacher raises, all-day kindergarten and other programs.

Chris Kotterman, who lobbies for the Arizona School Boards Association, said the state should focus on adequately funding public education.

“It’s just a fundamental, philosophical issue: The state’s first and only responsibility is to fund public education,” he said. “When you have funding issues like we have — teacher retention, and basic things like that — it’s not responsible to funnel general-fund dollars into private schools.”

Joe Thomas, president of the Arizona Education Association, said the expansion of ESAs is really an attempt to privatize education. “There’s no way in the world we need to be taking away from public schools and giving it to private schools,” Thomas said.

But Lesko, who introduced the expansion bill in the Senate and said she is confident it will pass, countered that the state can do both. She said parents should have more control over how to spend their child’s taxpayer-generated education money, and that ultimately, they are responsible for their child’s education.

Under Senate Bill 1431 and House Bill 2394, third-graders through 12th-graders who are not disabled would be required to take standardized tests and the results would be reported to the parents. Student achievement of ESA recipients is not tracked by the state.

“I believe that if this bill passes out of the Legislature, the governor will sign it,”Lesko said. She has talked to gubernatorial staffers about the bill, but has not spoken directly with the governor. Ducey refused to say last week whether he would sign the legislation.

In addition to the expansion effort, a separate bill, Senate Bill 1281, would require the Department of Education to contract with a private firm to manage oversight of the ESA accounts [e.g.,companies owned by Sen. Steve Yarbrough?] It also requires the Department of Education to fund the ESAs immediately after parents sign ESA paperwork, and prevents the department from delaying funding of the accounts.

Smith said his legislation, which advanced through the Senate Education Committee last week, is intended to help parents who have had problems with the program, including missed payments by the Department of Education.

Asked if he trusts the Department of Education to run the program, he said, “That’s why a provision of this bill allows for third-party vendors to kind of come in and help with that. I think there’s some concern there.” A recent audit identified $102,000 of misspending over six months in the ESA program; only 15 percent of that money was recovered, the audit found.

Jonathan Butcher, education director for the Goldwater Institute, said in an email that “to more effectively serve students and families, the application process and financial transactions … should be outsourced to entities that specialize in these services.” He said contractors should be required to submit reports to the Arizona auditor general.

In the Senate, where Republicans narrowly control the chamber, it is unclear if the expansion legislation will muster enough votes to advance.

Worsley said he is concerned about “whether or not the financial system would break” if lawmakers send “ESA money out the door in an unlimited way.”

Republican Sen. John Kavanagh, of Fountain Hills, has no qualms with expanding the program, saying it would ensure parents have better control over their child’s academic performance. He said expansion of the program would help more low-income students who could not otherwise afford private-school tuition, and could save the state money since students would get 90 percent of what they would receive if they attended public district schools.

“We started with competition between charter and public schools, then homeschooling, and now it’s private schools and religious schools,” he said. “Let them all compete — competition lets them all perform better.”

Tucson Sen. David Bradley, a Democrat, said he would only support expansion if schools that accept ESA payments accept all students, no matter their academic performance or disability.

“The public-school system has to take all comers, whereas a private school can say, ‘We can’t handle this kid,’ ” said Bradley. “My belief is, in the long run, the poor get left behind in this deal.”

As I said at the beginning, the “vouchers for all” bills are unconstitutional.  Our lawless Tea-Publican legislators simply do not care. The Arizona Constitution prohibits state funding to private and parochial schools:

Article 2, Section 12: “No public money or property shall be appropriated for or applied to any religious worship, exercise, or instruction, or to the support of any religious establishment.”