Another shameful act of enabling Donald Trump by a cowardly U.S. Supreme Court this morning.

The Supreme Court ordered the two Emoluments Clause cases, Trump v. Citizens for Responsibility and Ethics in Washington, 20-330, and Trump v. District of Columbia, 20-331, to be dismissed on the specious ground that now that Donald Trump is no longer president the cases are moot.

Donald Trump made millions of dollars in ill-gotten gains by violating the Emoluments Clause.  The plaintiffs wanted, and the Court should have ordered, that Donald Trump disgorge all of his ill-gotten gains in violation of the Emoluments Clause. By dismissing these cases, the Court essentially endorsed Donald Trump’s blatant illegal conduct and allowed him to retain the fruits of his illegal conduct. This is in no way is doing “equal justice under law.”

Once again, there is one rule for Republicans, a privileged class, and another rule by which everyone else must answer under the law.

The U.S. Supreme Court ordered the formal dismissal of two lawsuits that accused Donald Trump of unconstitutionally profiting from his presidency.

The cases no longer had any practical consequences after Trump’s term in office ended Jan. 20, and both sides agreed the disputes had become legally moot.

Those suing Trump included hotels, restaurants and the attorneys general of Maryland and the District of Columbia. They said Trump as president benefited from a stream of foreign and state government officials who patronized his properties, including the Trump International Hotel in Washington, a few blocks from the White House.

The lawsuits accused Trump of violating the Constitution’s two emoluments clauses. One clause bars a president from accepting benefits from foreign governments without congressional consent, while the other bars receipt of any benefit other than a salary from the U.S. government or a state.

“This important litigation made the American people aware for four years of the pervasive corruption that came from a president maintaining a global business and taking benefits and payments from foreign and domestic governments,” said Noah Bookbinder, executive director of Citizens for Responsibility and Ethics in Washington, a watchdog group involved in one of the suits.

A key question was who, if anyone, could sue to enforce the emoluments clauses. Lower courts in both cases said the plaintiffs had legal standing. The Supreme Court set aside those rulings as part of its order Monday, taking a step urged by Trump’s Justice Department.

Had the suits gone forward while Trump was president, the plaintiffs might have been able to force him to turn over some of his business records.

Don’t worry about that. The Court previously greenlighted the Manhattan District Attorney and the Attorney General of New York to pursue their investigations of Trump’s business records from his accounting firm and banks. Those investigations are likely in front of a secret grand jury as we speak. NY prosecutors interview Michael Cohen about Trump finances:

The interview focused in part on Trump’s relationship with Deutsche Bank, his biggest and longest standing creditor, according to the three people, who weren’t authorized to discuss the investigation and spoke to The Associated Press on the condition of anonymity.

The interview, at least the second of Cohen by the Manhattan district attorney’s office, comes amid a long-running grand jury investigation into Trump’s business dealings. District Attorney Cyrus R. Vance Jr. has been waging a protracted legal battle to get access to the president’s tax records.

Now that former Treasury Secretary Steven Mnuchin and IRS Director Charles Rettig are no longer able to disregard federal law and obstruct justice on behalf of Donald Trump, House Democrats are renewing their demand for Trump’s tax records. Donald Trump May Be Gone, But Democrats Are Still Trying To Get His Tax Returns (1/15/2021): 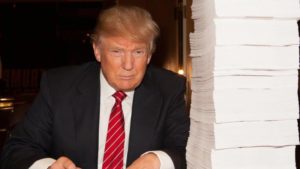 Trump escaped his four years in Washington without disclosing his tax returns, as most modern presidents do, and Democrats failed to pry the returns free with a lawsuit.

But the House Ways and Means Committee, which has jurisdiction over taxes, plans to renew its efforts to get the now-ex-president’s returns.

Ways and Means will “continue to pursue its case” for Trump’s taxes as part of its effort to oversee the mandatory annual audit of both the president and vice president, committee spokeswoman Erin Hatch told HuffPost in a statement.

Federal law says the Treasury Department, which oversees the IRS, is supposed to hand over any tax return document that tax policy committees on Capitol Hill request. Congress gave itself this power in a 1924 law designed to expose corruption in the executive branch.

But Trump’s Treasury Department, under Steven Mnuchin, simply refused to comply with the disclosure law. The committee followed its request with a subpoena, which was also denied, and then a lawsuit. The lawsuit has been bottled up by U.S. District Judge Trevor McFadden, a Trump campaign donor and 2017 appointee. He has refused to hear the merits of the case until higher courts rule on Trump’s other refusals to comply with congressional oversight.

The Ways and Means Committee plans to renew its formal request for Trump’s taxes as well as its subpoena, the committee spokesperson said, and does not anticipate “any interruption in our case.”

It’s not clear what happens next, as there is not much precedent for the situation. It’s not even clear why the court case would need to continue, since Joe Biden is now president and has nominated a new treasury secretary, former Federal Reserve chair Janet Yellen.

Theoretically, Democrats could renew their request for Trump’s taxes, and Yellen’s IRS would simply hand them over.

Trump’s personal lawyers have anticipated this possibility, and on Tuesday asked McFadden to hold a hearing on whether the parties involved could hold off on disclosing Trump’s taxes before McFadden “reaches a decision on the merits” of the case, which he has resisted doing. McFadden set a hearing for Friday.

Ways and Means probably has to play along with the judge instead of getting the returns straight from the Biden administration, said Steve Rosenthal, a senior fellow with the Tax Policy Center.

“Now that the issue has been raised to McFadden, it may be bad faith for them to sidestep McFadden,” Rosenthal said.

But Ways and Means isn’t the only committee that can ask the IRS for somebody’s tax information. The Senate Finance Committee, which the Democrats now control, has the same power. And the Senate has nothing to do with the case before McFadden.

Incoming finance chair Ron Wyden (D-Ore.) could make his own request for Trump’s taxes under tax code section 6103. In an interview Tuesday, Wyden said he backs the House’s approach.

“The House has put a lot of time into this,” Wyden said. “I’m going to work with them.”

But Wyden didn’t rule out sending his own request to the Treasury Department.

“The American people deserve to know what the president and vice president are paying and what they owe,” Wyden said. “Now that I’m the chairman, we’re going to look at all the tools to make sure the public knows that.”

House Democrats have renewed their long-stalled demand for Donald Trump’s federal tax records, but the Biden administration has not yet decided whether it will drop its predecessor’s objections and release the Treasury Department records to investigators, Justice Department attorneys told a federal judge Friday.

U.S. District Judge Trevor N. McFadden declined Friday to lift a stay on a pending House lawsuit. Instead, the judge agreed to give Treasury and Justice Department officials two weeks to report back to him, acknowledging that President Biden’s team was just settling in after the inauguration this week.

McFadden also kept in place an order requiring the government to give the former president’s lawyers 72 hours’ notice before releasing his tax return information to allow them to file a request to block the release.

Separation-of-powers issues that have slowed the case “may fall out” now that Trump is no longer in office, the judge noted.

“It would be a former president trying to stop a political branch, rather than one branch suing another. At least that’s my instinct,” said McFadden, a 2017 Trump appointee to the federal bench in Washington.

Since last March, the lawsuit filed by the House Ways and Means Committee to enforce a statutory request and a subpoena for six years of Trump’s federal tax records has been frozen by McFadden. 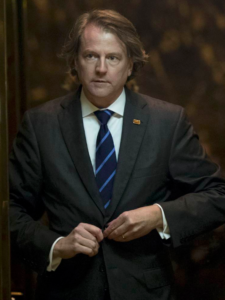 McFadden, a former Justice Department official, stayed the case pending a final verdict by the U.S. Court of Appeals for the D.C. Circuit over similar legal issues testing the balance of powers between a president and Congress raised by a House lawsuit seeking to compel testimony by former Trump White House counsel Donald McGahn.

A decision by the full court is pending.

On Friday, Letter said the new Congress has authorized reissuing of a subpoena for Trump’s tax information that expired with the election changeover.

Also, he said the Treasury Department and the House historically have always agreed that requests made under the 1924 law giving the tax-writing committee authority to seek tax returns and other records in overseeing the effectiveness of the Internal Revenue Service’s audit program survive the turnover of Congress.

The House has been stymied for months, “numerous investigations have been obstructed,” and “enough is enough,” Letter argued, saying, “The statute here is clear. ‘Shall’ means ‘shall,’ and therefore the Treasury Department should turn over these materials . . . and that should be the end of it.”

Gilligan said he could not guarantee a decision in two weeks but called a delay and the notice requirement a way to balance the interests of all sides.

Trump attorney Patrick Strawbridge supported maintaining the notice requirement to preserve the former president’s right to his day in court to object to any handing over of records.

McFadden said he agreed, adding that he was thinking of “entering an order along those lines if there is a change of view from the Treasury. But I’d love for all of us to agree together on a path forward. Then we can try to get some resolution here.”

Just turn over the tax records as the law mandates. No more obstruction of justice.