SCOTUS Watch: the court saves its most controversial decisions to the last day

Home/Courts & Law, National Politics/SCOTUS Watch: the court saves its most controversial decisions to the last day
Previous Next

SCOTUS Watch: the court saves its most controversial decisions to the last day

The Chief Justice Roberts Supreme Court has demonstrated over the years a penchant for the reality TV show cliffhanger: build up the tension and suspense, and then tell viewers “tune in for the next episode” to find out what happens.

This is what happened again today, with the court leaving its most controversial cases to be decided on Thursday, the last day of the session according to the Chief Justice: the two partisan gerrymandering cases (Lamone v. Benisek and Rucho v. Common Cause), the census case (Department of Commerce v. New York),Carpenter v. Murphy, and Mitchell v. Wisconsin.

The first opinion is a plurality decision in US v. Haymond, by Justice Gorsuch, joined by Justices Ginsburg, Sotomayor and Kagan; what makes this a plurality opinion is that Justice Breyer has a concurring opinion in the judgment which is substantially narrower than the Gorsuch opinion, and begins by saying that I “agree with much of the dissent.” Justice Alito dissents, joined by Justices Roberts, Thomas and Kavanaugh. The 10th Circuit’s ruling is vacated and remanded. The court holds that a federal law requiring a defendant who is registered as a sex offender to return to prison for at least five years if a federal judge finds that the defendant violated the terms of his supervised release is unconstitutional.

Justice Gorsuch writes that only “a jury, acting on proof beyond a reasonable doubt, may take a person’s liberty.” But in this case, a federal law required a judge to send Haymond to prison without “empaneling a jury of his peers or requiring the government to prove his guilt beyond a reasonable doubt. As applied here, we do not hesitate to hold that the statute violates the Fifth and Sixth Amendments.” Justice Gorsuch notes, in responding to the Alito dissent, that “what agitates the dissent so much is an issue not presented here: whether all supervised release proceedings comport with Apprendi.”  Justice Gorsuch states that the plurality opinion is limited to the specific statutory provision at issue.

Justice Alito begins his dissent with this zinger: “I do not think that there is a constitutional basis for today’s holding, which is set out in Justice Breyer’s opinion, but it is narrow and has saved our jurisprudence from the consequences of the plurality opinion, which is not based on the original meaning of the Sixth Amendment, is irreconcilable with precedent, and sports rhetoric with potentially revolutionary implications. The plurality opinion appears to have been carefully crafted for the purpose of laying the groundwork for later decisions of much broader scope.”

Kisor is about whether to uphold the doctrine known as Auer deference, which instructs courts to defer to an agency’s interpretation of its own regulation. Kagan says the only question before the court is whether to overrule Auer, and the answer is no. But “even as we uphold it,” she writes, “we reinforce its limits. Auer deference is sometimes appropriate and sometimes not.” “Whether to apply it depends on a range of considerations that we have noted now and again, but compile and further develop today. The deference doctrine we describe is potent in its place, but cabined in its scope.” The court sends the case back to the court of appeals for it to consider whether it applies to the agency interpretation in this case. The court says the Federal Circuit didn’t consider in this case whether the VA regulation at issue is genuinely ambiguous.

In Chief Justice John Roberts’ concurrence he “write[s] separately to suggest that the distance between the majority and Justice Gorsuch is not as great as it may initially appear” and explains that “the cases in which Auer deference is warranted largely overlap with the cases in which it would be unreasonable for a court not to be persuaded by an agency’s interpretation of its own regulation.”

Justice Gorsuch concurs in the judgment because he agrees that the decision below needed to be reversed, but he’s gunning for Auer, beginning his separate opinion with: “It should have been easy for the Court to say goodbye to Auer v. Robbins.”

In Kisor, Chief Justice Roberts and Justice Kavanaugh each make this point: “Issues surrounding judicial deference to agency interpretations of their own regulations are distinct from those raised in connection with judicial deference to agency interpretations of statutes enacted by Congress. See Chevron U. S. A. Inc. v. Natural Resources
Defense Council, Inc., 467 U. S. 837 (1984)”  Both Justices note that they “do not regard the Court’s decision today to touch upon the latter question.”

The third opinion is a 7-2 decision in TN Wine and Spirits v. Thomas, by Justice Alito, joined by Justices Roberts, Ginsburg, Breyer, Sotomayor, Kagan and Kavanaugh. Justice Gorsuch filed a dissenting opinion, joined by justice Thomas. This case challenged the constitutionality of Tennessee’s residency requirements for retail liquor licenses. The Supreme Court affirms the Sixth Circuit’s ruling, which struck down the residency requirement. The court holds that the state’s two-year residency requirement for retail liquor licenses violates the Constitution’s Commerce Clause, and is not saved by the 21st Amendment (repeal of prohibition in the 18th Amendment). The Commerce Clause bars states from discriminating against out-of-state residents, while the 21st Amendment gives states some latitude with respect to the regulation of alcohol.

Justice Alito reaffirms the concept of the “dormant Commerce Clause,” implicit in the Commerce Clause, against states passing legislation that discriminates against or excessively burdens interstate commerce. Of particular importance is the prevention of protectionist state policies that favor state citizens or businesses at the expense of non-citizens conducting business within that state. “[T]he proposition that the Commerce Clause by its own force restricts state protectionism is deeply rooted in our case law. And without the dormant Commerce Clause, we would be left with a constitutional scheme that those who framed and ratified the Constitution would surely find surprising.”

Justice Gorsuch in his dissent writes that the the 21st Amendment “embodied a classically federal compromise: Nationwide prohibition ended, but States gained broad discretion to calibrate alcohol regulations to local preferences,” and that “under the terms of this compromise, Tennessee’s law imposing a two-year residency requirement on those who seek to sell liquor within its jurisdiction would seem perfectly permissible.”

Tomorrow’s opinions will be more consequential. The Census case in particular, in light of recent legal developments, has become a flashpoint for controversy. As election law expert Richard Hasen explains at Slate, The Census Case Is Shaping Up to Be the Biggest Travesty Since Bush v. Gore:

The government’s conduct in the pending Supreme Court case about adding a citizenship question to the census has gone from indefensible to outrageous. In the case, which is likely to be decided this week, Solicitor General Noel Francisco on Tuesday asked the Supreme Court to become complicit in a cover-up of discriminatory activity by doing something the court does not and cannot do: decide a legal issue that is not before it. If the court does so, any pretense of the legitimacy of the decision will be gone. 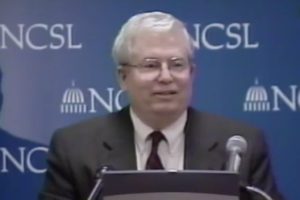 The Hofeller documents have led to a lot of skirmishing between the parties, and not only in the Supreme Court. Just Tuesday, the 4th U.S. Circuit Court of Appeals agreed to send its own census case—which is not currently before the Supreme Court—back down to the trial court to consider whether the Hofeller evidence is good proof that the government included the census question for a racially discriminatory purpose in violation of the Constitution’s equal protection guarantee. If the government acted out of a racially discriminatory purpose, then the citizenship question must be excluded from the census, even if the government could have included the question for facially legitimate reasons.

To be absolutely clear, the equal protection claim is not currently before the Supreme Court in the case it is about to decide. Nonetheless, in two last minute filings with the Supreme Court, Francisco has asked the court to decide the question: “The Fourth Circuit’s order underscores the need for this Court to address the equal-protection claim and the immateriality of the Hofeller files in its disposition of the above-captioned case so that the lawfulness of the Secretary’s decision can be fully and finally resolved.”

This is outrageous. The issue has not been fully briefed. It was not the subject of oral argument. It involves evidence for which there has been no fact-finding. For the Supreme Court to decide the issue on this basis is the definition of lawlessness. It is not how the Supreme Court normally does business, and the solicitor general should know better. If the court starts doing this, it becomes no more than a branch of the Trump administration.

[I]n another case of similar political import, a Supreme Court majority declared the following: “The press of time does not diminish the constitutional concern. A desire for speed is not a general excuse for ignoring equal protection guarantees.” That case was Bush v. Gore, the case ending the disputed 2000 presidential election and handing the election to Republican George W. Bush over Democrat Al Gore. There, the justices of the Supreme Court let politics get in the way of a fair decision. It looks like history may be about to repeat itself.