I left some comments at a right-wing Arizona blog today, responding a post about McSally’s Senate campaign and some of the critical ads being run against her.

I posted as myself, not hiding my affiliations, viewpoint, or identity. I did not use profanity or make any ad hominem attacks on any of the writers or commenters. Instead, I pointed out in my main comment that Democrats don’t unreasonably dislike Trump, but have very good reasons for our distaste for him, and the way he conducts himself in office.

I also replied to some of the other commenters directly, again pointing out clear untruths, and suggesting they open their minds to other points of view, and not reduce their opponents to evil caricatures.

This is the reply I got: 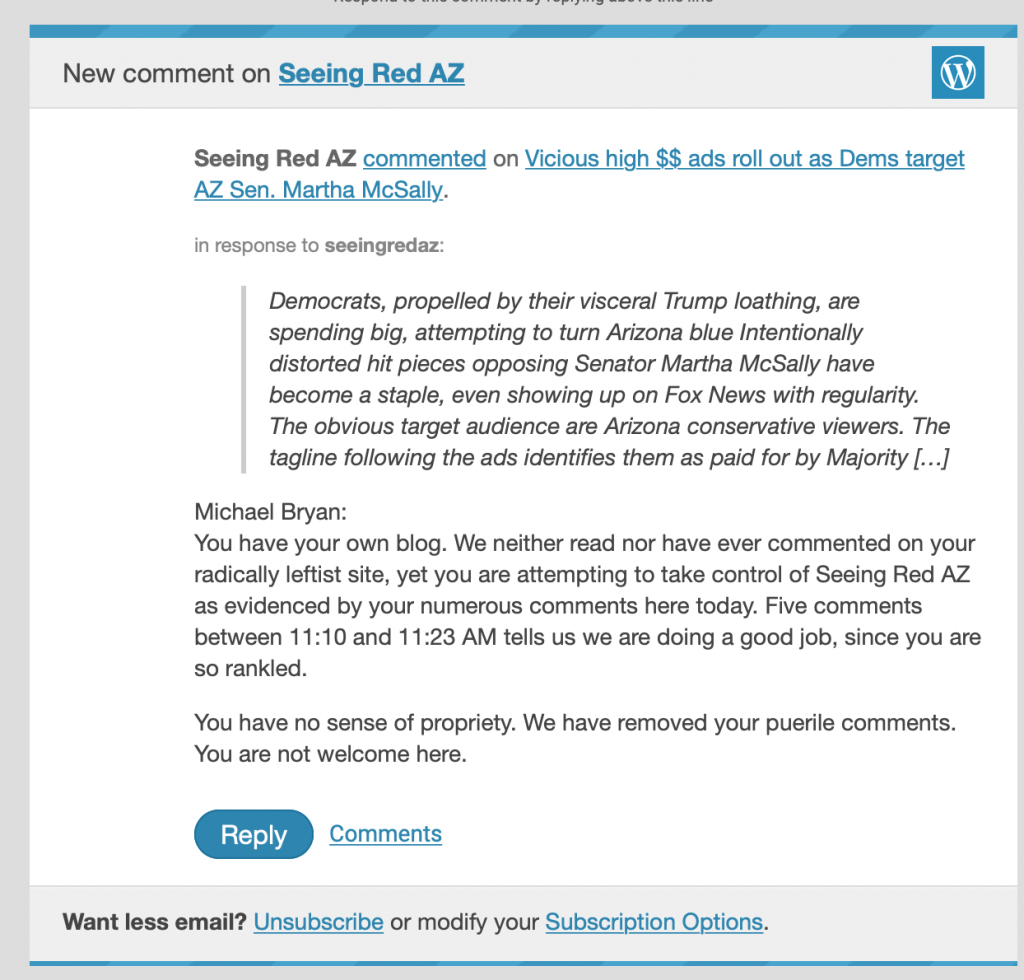 Apparently, it is I, who welcomes and tolerates dissenting voices in our comments, who has no sense of ‘propriety’? Commenting is now considered “attempting to take control” of a blog of a differing viewpoint? I’m also pretty sure that they haven’t a clue what “puerile” means: childishly silly and trivial. I did not save my comments, but I would challenge them to repost them verbatim in comments here and let our readers decide if they were “puerile”.

I am not welcome there? Not sure what that means, given that anyone can load their URL. They are a public website, not a subscription-only club. If they really only want readers who already agree with them, perhaps they should require private accounts to read their posts? Are they going to IP block me? What, exactly, are they afraid of? My words? My viewpoint? The truth? Their statement really makes little sense to me; if they’ve never read this blog, how do they know we’re a “radical leftist site”? It’s all very sad. Pitiful, even.

We at BlogForArizona welcome the comments of conservatives, and people of all viewpoints, so long as they are civil. I guess that’s the real difference between a “radical leftist” and a conservative these days; only we still believe in honest public dialog and debate.

It’s sad how thin-skinned conservatives have become. It’s as if the tiniest pinprick of dissent is too much for their insulated and etiolated views to tolerate. Conservatism has become an ideological hothouse, unable to survive real, honest public debate. Only by demonizing, or out-right banning, any dissenting voice can they maintain the echo chamber that preserves their cult-like control over an ever-shrinking portion of the electorate.

We will dispel their hold on this nation come November by handing them a crushing electoral defeat, removing them from control. The American public is growing weary of their toadying to the oligarchy, ineptitude, and indifference to the concerns of most Americans. How the Republican Party will ever recover from the cult of Trump is a mystery to me, but to ever be relevant to American life and politics again, recover they must.

They could start by engaging honestly and openly with opposing ideas, again. I used to be able to have an honest disagreement with conservatives, now all such efforts seem to accomplish to drive them deeper into frenzied denial and destructive tribalism.

Remember to register through your county recorder for the PEVL, so they can’t suppress your voice, or your vote.