Self-parody: Putin’s puppet to campaign on calling Joe Biden a ‘puppet of the radical left’

Home/National Elections, National Politics/Self-parody: Putin’s puppet to campaign on calling Joe Biden a ‘puppet of the radical left’
Previous Next

Self-parody: Putin’s puppet to campaign on calling Joe Biden a ‘puppet of the radical left’

Donald Trump is a textbook example for psychological projection, i.e., unconsciously taking unwanted emotions or traits he doesn’t like about himself and attributing them to someone else.

Although in Trump’s case, I am not so sure that it is unconscious. Trump has never developed past the childhood schoolyard taunt of “I’m rubber, you’re glue, whatever you say about me, bounces off of me and sticks to you.” His infantile intellect genuinely believes this, as if it is a magical talisman.

Who can ever forget the classic example of this during the presidential debate when Hillary Clinton called Donald Trump a puppet of Vladimir Putin – a true fact – and Trump’s infantile response was “No puppet, no puppet, you’re the puppet,” i.e. “I’m rubber, you’re glue.” That retort didn’t even make sense in context, because Vladimir Putin was secretly aiding Trump’s campaign out of a visceral hatred for Hillary Clinton whom he wanted to defeat or leave weakened, and Donald Trump modeled his puppet master’s behavior.

Trump apparently believes this worked so well for him in 2016 that he’s getting the band back together for a reunion tour of Putin’s puppet, whose fascistic authoritarian desires have now been laid bare for all to see, campaigning on accusing Joe Biden of being a “puppet of the radical left.” We’ve now entered the self-parody phase of this campaign.

Joe Biden has over a 40 year career as a traditional liberal Democrat. The biggest challenge he faced in the Democratic primary was from the Progressive wing of the party who said his traditional liberalism wasn’t “progressive enough.” And for the record, the Progressive wing of the party is hardly characterized as the “radical left.” The positions Progressives support are also supported by a majority of Americans in issue polling, which by definition, makes it the majority or centrist position. Biden has 100% name ID, and is a known quantity. No reasonable person is going to believe that Uncle Joe is some “radical lefty.”

By contrast, the issues positions of the Republican Party are a distinct minority in public polling. Self-identified Republicans are alway the minority position naysayers in every poll. As William F. Buckley famously (or is it infamously) said, “A conservative is someone who stands athwart history, yelling Stop, at a time when no one is inclined to do so, or to have much patience with those who so urge it.” 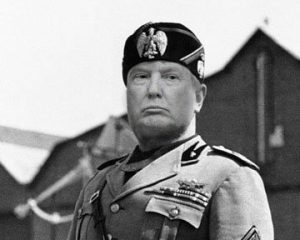 These are not conservatives. What we have today is a fascistic authoritarian tyranny of a minority party in thrall to the personality cult of Donald Trump casting aspersions on the vast majority of Americans, whom they have come to view not as a political opponents but as “the enemy.”

This is a dangerous new development in American politics.

After pausing their multimillion-dollar advertising campaign to review their strategy, the Trump campaign plans to launch new ads on Monday depicting Joe Biden as a puppet “controlled by the radical left,” according to two senior campaign officials.

The Trump campaign’s most recent internal polls show the “puppet of the left” attack on Biden is beginning to resonate with voters, per two sources briefed on the polling. And it sets the campaign up to attack Biden’s vice presidential selection.

Trump has been running a pure base voter campaign. He has never tried to expand his base since winning election in 2016. He is only talking to the older white shut-ins who watch Fox News aka Trump TV all day, and the white nationalists who follow the conspiracy theories of QAnon and other right-wing fever swamp media. My guess is he is only polling his base voters for purposes of motivating their turnout. As I indicated above, no reasonable person is going to believe that Uncle Joe is some “radical lefty.”

The ‘radical left’ is a placeholder for Biden’s VP pick,” said one adviser.

You can probably read this as Progressive champion Elizabeth Warren, whom Trump will refer to with the Pocahontas slur from now until election day. But the black women being considered for VP are only “radical” to Trump because they support Black Lives Matter, to whom Trump’s white nationalist movement is diametrically opposed. Do you know who else supports Black Lives Matter? The Pew Poll says Amid Protests, Majorities Across Racial and Ethnic Groups Express Support for the Black Lives Matter Movement. 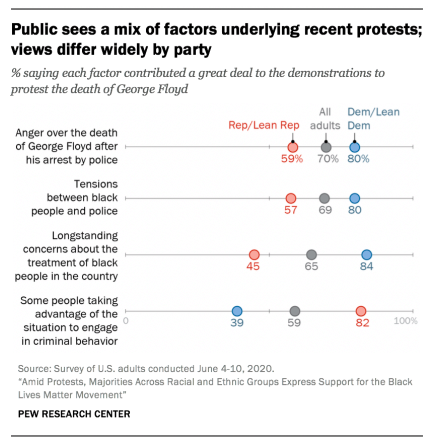 So once again we have a fascistic authoritarian tyranny of a minority party in thrall to the personality cult of Donald Trump casting aspersions on the vast majority of Americans.

Trump campaign officials are frustrated that Biden’s “very unfavorables” aren’t as high as they’d like them. Voters don’t intensely despise him the way many despised Hillary Clinton. And several Trump advisers have told me they doubt they can find a line of attack that will make Biden as hated as Clinton was in 2016.

Instead, Team Trump is trying to persuade voters that if they vote for Biden, they’re not actually electing this amiable, moderate old man. The only way they believe they can sufficiently toxify Biden is to convince voters that he’s an empty vessel to be filled by the policies of the “radical left.”

That’s why the Trump campaign has made so much of Biden’s policy partnerships with Bernie Sanders and Alexandria Ocasio-Cortez [neither one of whom is under consideration for Biden’s VP].

“Empty vessel” strategy? Joe Biden has over a 40 year legislative record, and participated in passing landmark legislation. Donald Trump has exactly one legislative “achievement” in his term, the 2017 GOP tax bill for corporations and the wealthy, a bill that the American public despises, as GALLUP has tracked:

The 2017 Tax Cuts and Jobs Act (TCJA) is not turning out like President Donald Trump and the Republicans hoped it would — at least, based on the public opinion data we have to date. Americans remain more likely to disapprove than approve of the law, with 40% approval and 49% disapproval in Gallup’s latest update. Other recent polls confirm that the tax reform law is viewed more negatively than positively — including surveys conducted by the Pew Research Center (36% approve/49% disapprove), Monmouth University (34% approve/43% disapprove), and Economist/YouGov (34% support/40% oppose).

Was the Trump campaign simply too lazy or too incompetent to do the opposition research into Joe Biden’s legislative record to find votes that they can use to mischaracterize his record? What kind of third-rate campaign are they running?

But if Biden picks somebody who has higher “very unfavorables” than he does, watch for the Trump campaign to try to persuade the public that this VP bogey-woman is actually the person they are electing president.

Jason Miller, a senior Trump campaign adviser, put it this way: “Biden’s VP pick is effectively his political living will, for a candidate who has already said he’s merely a transition to the next Democrat and has refused to commit to serving a second term.”

There is some efficacy to this argument. When John McCain, who was elderly and had a history of cancer picked Caribou Barbie, the ditzy Sarah Palin as his running mate, there almost certainly was some percentage of voters who said “Oh hell no! I’m not putting that fruitcake one heartbeat away from the presidency.”

But I would caution that this was a very small percentage of voters who made McCain’s VP pick their deciding factor. The economic implosion of the Bush-Cheney Great Recession of 2018 that nearly destroyed the world’s financial system and economy was what drove voters to choose Barack Obama.

Today we are in a similar existential crisis: a country being devastated by the coronavirus pandemic and the resulting economic devastation that has given us a recession with depression-level numbers not seen since the Great Depression due to the utter incompetence and indifference of the Trump-Pence administration. This election is a referendum on the failures of the Trump-Pence administration, not Biden’s VP pick. Few voters are going to be moved to vote against Biden on this basis.

On the other hand, a black woman as VP would invigorate the core Democratic black voter base who lacked the enthusiasm to turn out for Hillary Clinton in 2016 at the same level of enthusiasm as they did for Barack Obama. This is what the Trump campaign most fears.

The Response from the Biden campaign: Andrew Bates, director of rapid response, said, “The American people know Joe Biden. And after seven consecutive months of failed leadership during the worst public health crisis in generations, they know that our nation’s capacity to join the rest of the world in beating back COVID-19 has been crippled by one overriding burden: Donald Trump.”

“That’s why the Trump campaign is locked in a sad and pathetic cycle of bimonthly, shambolic message ‘resets’ — all of which are based on the same recycled lies that voters have seen through countless times before.”

Joe Biden is not Hillary Clinton, but the dotard Donald Trump only has one playbook, and lines that he can remember through rote repetition. So he is going to try to run the same playbook again.