A Blockade is an Act of War.

Tea-Publicans in the U.S. Senate today declared a “blockade” against the U.S. Constitution, Article 2, Section 2: “The President …  shall nominate, and by and with the advice and consent of the Senate, shall appoint ambassadors, other public ministers and consuls, judges of the Supreme Court, and all other officers of the United States . . .”

This is an act of war. The GOP is officially at war with the U.S. Constitution, in violation of their oath of office.

As far as Senate Republicans are concerned, the fight over the Supreme Court vacancy is now officially over. They’ve declared themselves the winner.

Every Republican on the Senate Judiciary Committee, the panel responsible for evaluating judicial nominees in detail, met in private this morning with Senate Majority Leader Mitch McConnell (R-Ky.). Soon after, Sen. Lindsey Graham (R-S.C.), a longtime committee member, told the Associated Press the GOP group came to an agreement: there would be no hearing, no vote, and no confirmation of any nominee, regardless of merit or qualifications.

A partisan blockade, unlike anything ever tried in American history, is the only course the Republican majority is willing to consider. Period. Full stop.

Sen. Orrin Hatch (R-Utah), another member of the Judiciary Committee, said today he wouldn’t even speak to a Supreme Court nominee if he or she showed up at his office. Soon after, McConnell and Senate Majority Whip John Cornyn (R-Texas) said the same thing. 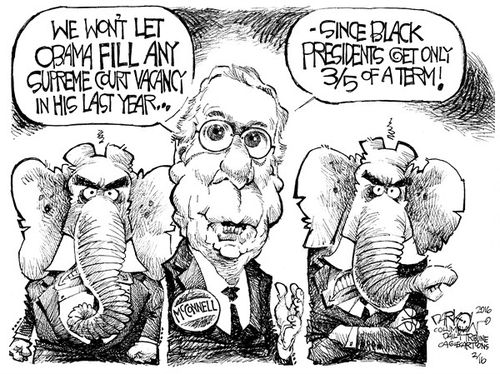 So, is the fight over an unchosen, unknown nominee finished before it begins? Well, maybe.

President Obama and his team are no doubt aware of the developments on Capitol Hill, though it’s unlikely West Wing officials are going to simply quit, telling each other, “Well, we tried.”

What’s probably going to happen is that the president will nominate a qualified official for the high court; he’ll encourage senators to do their job while honoring the constitutional process; and then Democrats hope for the pressure to change the politics.

The next question, of course, is whether such pressure is going to exist.

Last week, a Fox News poll found a clear majority of Americans agreeing that the Supreme Court’s vacancy should be filled this year, not next. This week, a Pew Research Center survey found similar results.

Of course, while independent and Democratic voters agree on senators doing their duty, the same poll found that 66% of GOP voters want the blockade to continue – and those are very likely the only voters Senate Republicans care about right now.

It sounds cynical and undemocratic, but by all appearances, GOP lawmakers on Capitol Hill just don’t buy into the notion that there will ever be a public backlash against them – on practically anything. Cycle after cycle, their antics are rewarded, even after a government shutdown, a debt-ceiling crisis, and a complete unwillingness to govern on practically issue.

Periodically, someone will say, “The public won’t stand for this,” to which Republicans respond, “Of course they will. Voters don’t pay much attention anyway.”

The anti-government, anti-constitution, anti-democracy authoritarian Tea-Publicans have just declared war on the U.S. Constitution. Just what the hell is it going to take for Americans to wake up and to realize that an insurrectionist rebellion has seized control of your government, and to remove them from power?

When war is declared on the U.S., the only proper response is for the U.S. to declare war in return — in this case, on the GOP. This insurrectionist rebellion must be defeated. It is time to throw the GOP on the ash heap of history.