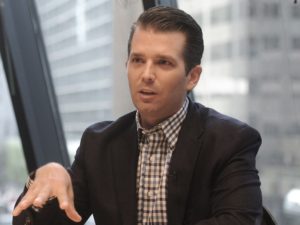 The Senate Judiciary Committee on Wednesday released 1,800 pages of interview transcripts (.pdf) from Donald Trump Jr.’s testimony about a controversial meeting at Trump Tower in June 2016 with a Russian lawyer who has since admitted to being an “informant” for the Kremlin.

Donny Jr. was interviewed, not under oath, and not particularly aggressively questioned by committee staff.

Donny Jr. pulled an “Ollie North” with repeated denials of being able to recall details that a witness who has prepped for his testimony would be expected to be able to recall, or could refresh his recollection by referring to documents. 54 things Donald Trump Jr. couldn’t ‘recall’ or ‘remember’ in his testimony:

If there’s one thing Donald Trump Jr. cleared up with his congressional testimony, it’s that he doesn’t remember a lot of things.

In a newly released transcript of his testimony, Trump repeatedly couched his answers about that June 2016 Trump Tower meeting by saying he did not “remember” or that he didn’t “recall” certain things. Even when he was pretty sure, he’d say “not that I recall” or something like that. The result was a pretty cagey piece of testimony.

Below is a list of 54 substantive issues on which Trump cited his lack of a memory:

1. Details of the Trump Tower meeting in general: “Again, I don’t remember too many details of it.”

2. The presence of an eighth person — Russian American lobbyist Rinat Akhmetshin — in the Trump Tower meeting: “As I mentioned in my statement, people have said there was an eighth person. I just can’t remember. … I’ve heard the name. I don’t recall now.” (Trump couldn’t remember this despite another attendee, Ike Kaveladze, saying Akhmetshin wore a hot pink outfit.)

3. Whether the meeting’s attendees were introduced: “I don’t recall, but I imagine that’s likely.”

4. Speaking with Russian pop star Emin Agalarov on June 6 and 7, despite phone records that show phone calls between them: “I do not recall speaking with Emin. It’s possible we left each other voice-mail messages. I simply don’t remember. … I don’t recall if I actually reached him, no.”

5. Whether he talked with Agalarov on June 7 about publicist Rob Goldstone’s June 6 email pitching the Trump Tower meeting: “No, I don’t [recall.]”

7. Whether he was traveling at the time: “I don’t recall that, no.”

8. Receiving an email from Goldstone saying Emin’s father, Aras Agalarov, and his important Russian friends supported Trump: “I don’t remember getting it, but I would have interpreted it as casual congratulations.”

9. Whether Goldstone sought to set up any meetings with Russian government officials: “None that I can recall, no.”

12. Speaking to Manafort two days after the Goldstone email: “I don’t [recall], no.”

14. Whether he spoke with his father during a call on a blocked number on the afternoon of June 6: “I don’t [know].”

17. Whether he mentioned the potential meeting to top campaign officials when it was proposed: “I just don’t recall. I could have, but I don’t remember doing it.”

19. Having discussions about the meeting afterward: “I do not recall ever discussing it with Jared [Kushner], Paul [Manafort] or anyone else.”

21. Whether Kaveladze disclosed for whom he worked (a Russian company): “Not that I remember, but he works for Crocus.”

22. Whether Russian lawyer Natalia Veselnitskaya or her colleagues mentioned Bill Browder, the U.S. businessman behind the Magnitsky Act: “Not that I remember.” (Trump aide Paul Manafort, who was also in the meeting, jotted down several notes relating to Browder.)

23. Whether Veselnitskaya requested then-candidate Trump would take actions regarding her client, Prevezon Holdings, if he became president: “Not that I remember.”

24. Whether the attendees asked for action regarding the Magnitsky Act: “Not specifically that I recall.”

25. Whether Veselnitskaya provided names of Hillary Clinton or DNC supporters who were involved in a supposed tax scheme: “Not that I remember. … I don’t recall, but she may have.”

26. Whether the meeting’s attendees brought documents: “Not that I remember, no.”

27. Whether he discussed Prevezon Holdings or the Magnitsky Actbetween the meeting and when it was first reported in the news in July 2017: “I wouldn’t have even remembered those things until I read about it in the news.”

29. Whether Goldstone saying the Russian government supported Trump alarmed him: “I don’t know because I don’t remember thinking about it at the time.”

30. Whether he and Kushner spoke about the meeting before the New York Times reported on it: “I don’t remember. … I don’t recall actually having the conversation.”

31. On what might have prompted them to have a discussion: “I don’t remember.”

32. On who asked Veselnitskaya for more clarity on her allegations against Clinton and the DNC: “I don’t recall who asked. I believe it was myself, but ‘we’ meaning myself, Paul and Jared were there. I don’t remember who asked.”

33. Whether he saw an email about a Russian social media company helping Trump: “I don’t recall seeing it. … I don’t know if I had an understanding because I don’t remember seeing it.”

34. The timing of his father’s June 7 campaign speech in which his father said he had “very, very interesting” information about Hillary Clinton: “I don’t remember the exact timing of it.”

35. When he first reviewed his actions surrounding the meeting: “I don’t remember the exact chronology.”

36. Information about meetings with then-Russian Ambassador Sergey Kislyak: “I don’t remember the exact timing of when they took place.”

37. Who was in a post-election meeting with Kislyak: “I believe it was Jared Kushner, the Ambassador, maybe [Michael] Flynn, but I don’t remember.”

40. Other banks who were involved in the Trump Soho project: “I don’t remember.”

42. Whether he did any due diligence on the developer for Trump Soho, the Sapir Organization: “I don’t remember.”

43. Whether other projects used the Trump Organization as a sponsor to sell real estate units: “I just don’t remember the structure of the sales teams.”

44. On whether the Trump Organization did due diligence on buyers of particular units: “I don’t recall.”

45. Who the counterparty was on an Azerbaijan development deal: “I don’t remember.”

47. How many Trump Organization deals in 2016 included considering Trump as the developer: “I’m sure we looked at stuff. I just don’t remember what it was.”

48. On whether there were any discussions of how to use the DNC and John Podesta hacks: “I don’t recall it ever happening. I just don’t know that if someone had a passing conversation with me and said, ‘Hey, what do you think about that.’ But no, there was no substantive conversations that I can at all remember about any of that.”

50. What Trump campaign aide Boris Epshteyn’s job title was: “I don’t recall that, but I know — I believe it was largely in communications.”

51. Much of anything about Trump campaign adviser George Papadopoulos: “I believe he worked on the campaign, and I know the name, but that’s about the extent of what I recall at this time. … I don’t recall [his work for the campaign] at this time.”

52. What Rick Gates’s specific job was: “I don’t recall the specific title or role, what it would have been.”

53. Whether he traveled outside the United States on June 29: “I don’t recall, but we could find out.”

54. Who brought a Fort Lauderdale project to his attention: “No, I don’t [recall].”

See the interactive Trump-Russia Timeline at BillMoyers.com for the details that Donny Jr. conveniently could not recall.

So here’s the thing: one does not have to be under oath in order to be charged with lying to Congress. If a witness testifies that he does not know or does not recall details that other corroborative evidence establishes he clearly does know, his answer is a lie.

The Special Counsel has not yet interviewed Donny Jr. or Trump son-in-law Jared Kusher, while having already indicted former Trump campaign manager Paul Manafort, who was also present at the Trump Tower meeting, and already having interviewed almost all the other persons present.

It is widely speculated that Donny Jr. and Jared Kushner may be “targets” of the Special Counsel’s investigation. Targets are generally not interviewed by prosecutors.

If Donny Jr. and Jared Kushner are either interviewed or subpoenaed to testify before the grand jury, you can rest assured that Mueller’s team is not going to “take the answer” the witness that he does not recall. Prosecutors will have every email, every document, every phone call, and know every detail from having already debriefed everyone else by the time they are made to testify. Donny Jr. will be grilled on examination by prosecutors. His previous testimony before the Senate Judiciary Committee will be exposed as lies to the committee for which he can be charged.

Donny Jr. is banking on his corrupt father to obstruct justice by granting him a preemptive pardon. But all that does is relieve Donny Jr. of self-incrimination under the Fifth Amendment, so he can be forced to testify truthfully, or subsequently be charged for any false testimony post-pardon (Trump cannot pardon future crimes not yet committed).