Congress recently sweetened the terms for businesses seeking loans to survive the economic impact of the coronavirus pandemic with the passage of the Paycheck Protection Program Flexibility Act of 2020, amending the original PPP loan program enacted as part of the CARES Act (summarized):

After three tranches of coronavirus pandemic stimulus legislation, most businesses – admittedly not all, over 40% of all small businesses are on the verge of permanent closure – have access to the flexibility they need to receive a loan to remain open and to maintain employee payrolls, and if they can manage to do so, to receive loan forgiveness (if not, they are in trouble).

Individual employees, who were needlessly forced into seeking unemployment insurance benefits under the CARES Act enacted by Congress, as opposed to the more intelligently designed unemployment relief programs enacted by some European governments, are not so lucky.

The $600 per week enhanced unemployment benefit is set to expire on July 31, and Republicans in Congress are loath to extend what they consider an overly generous benefit to workers. “You damn takers!”

“Ignore those corporate oligarchs hiding behind the curtain!” According to an April report from the Institute for Policy Studies, America’s billionaires saw their wealth shoot up by $282 billion in just 23 days as the country was sheltering in lockdown. Overall, U.S. billionaire wealth grew by nearly 10% at the same time over 20 million people filed for unemployment, and by April 10 had passed $3.2 trillion—topping last year’s level.

The rich got richer, even in an economic disaster.

Thanks to Friday’s unexpected [unemployment] report, Republicans are suddenly feeling less pressure to renew the $600-per-week federal unemployment benefits that have been keeping many families afloat through the coronavirus crisis.

[Republicans] appear to be crossing their fingers and hoping that if more businesses are permitted to reopen, our economic problems solve themselves and they will be able to stop spending money on the plebes.

But while one might not have guessed it based on Trump’s surreal Rose Garden touchdown dance Friday, the country’s unemployment problem has not actually disappeared. It’s barely budged. As of May 16, the last date with complete data, more than 29 million Americans were still claiming jobless benefits. It is not at all clear how soon those people will be able to return to work. Allowing their federal aid to outright lapse would be both cruel and a near-term blow to the economy.

benefits they’d be eligible for. As a result, many Americans likely receive more in government aid at the moment than they were paid at their old jobs. This has irked Republicans—especially Sen. Lindsey “Over Our Dead Bodies” Graham—who claim that it disincentives people from going back to work. While this may be true to some extent, Friday’s employment report has shown that plenty of people are in fact returning to their jobs, despite the ongoing plague and generous aid on offer, as Tim Noah points out at the New Republic.

Note: The Congressional Budget Office (CBO) has a more nuanced view. CBO: Extending higher jobless benefits would increase unemployment. While it may be true that:

Five out of six workers would receive more in expanded unemployment benefits than they would earn on the job if Congress extends those benefits through January … [and] that would translate into lower employment both in the second half of this year and next year than if lawmakers let the added $600 weekly benefit expire July 31 as scheduled.

At the same time:

The analysis said that in the second half of this year, economic output would probably be greater than it would be without an extension of extra unemployment benefits enacted in March. That’s because jobless workers would have more money to spend on needed goods and services.

But in 2021, the CBO said, economic output would be lower than it otherwise would be, since there would be fewer people working.

And what would happen if Congress simply let the federal payments expire? The average recipient would potentially see a 63 percent drop in their income. That’s according to an analysis by Evercore ISI managing director Ernie Tedeschi (he tweeted out a state-by-state estimates earlier in the week, but added a national figure at my request. Thanks, Ernie). Cutting the federal benefit in half to $300 would shrink the incomes of the unemployed by about one-third. Given the number of people who will likely still be out of a job by summer, that would almost certainly deal a significant blow to consumer spending power and slow down the recovery. 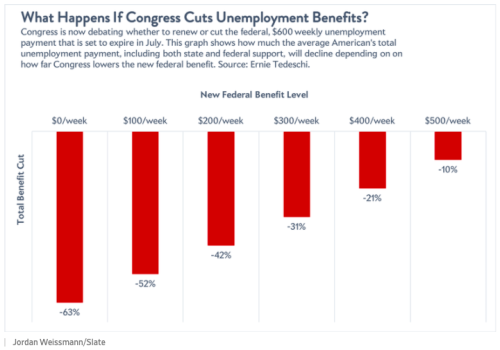 Another way to look at this is what’s known as the replacement rate: the size of an unemployment payment as a percentage of how much people earned at their previous job. Currently, Tedeschi estimates that the average replacement rate is about 101 percent (that’s why Democrats pushed for the $600 in the first place; they wanted to fully match people’s old earnings to make them whole). If you zero out the federal benefit, the rate drops to 37 percent. At the halfway point, you get 69 percent replacement. (You might notice this graph is basically a right-side up version of the one above.) 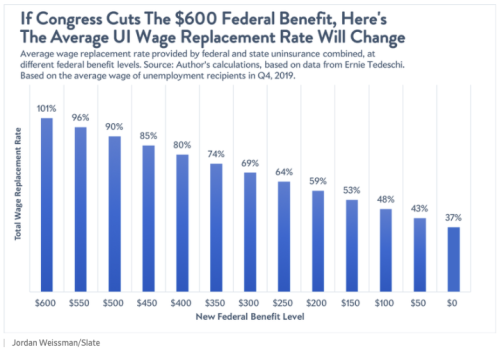 If I had to guess, my sense is that Republicans and Democrats will likely still come to a deal that lowers the federal unemployment benefit, but doesn’t eliminate it entirely, which is where things seemed to be headed before Friday’s job figures. A $350 benefit that replaced 75 percent of income, on average, would actually be in line with what some progressives were hoping for before the CARES Act was negotiated (yes, Democrats actually exceed expectations on that front). An even more humane approach, which would avoid cutting anybody’s income at a time of national strife, might be to keep the benefits as-is but let workers collect a “return to work” to work bonus if they decide to get back to the job (Republicans have proposed the bonus as an alternative to the current UI setup, which would be the opposite of humane).

It would be a one-time “death benefit” to return to work before it is safe to do so.

But simply letting the benefits disappear would be vicious, pointless, and set back the recovery Republicans seem to think is going so well.

Raise your hand if you believe the coronavirus pandemic will be fully contained by the end of this year, allowing businesses to reopen and workers to return to work safely? Anyone? Hello, is anyone out there? Yeah, that’s what I thought.

Congress is going to have to extend the enhanced unemployment benefit at some level, just as it extended relief for businesses under the Paycheck Protection Program Flexibility Act of 2020. With the coronavirus still spreading unchecked in many parts of the country, including here in Arizona, and a “second wave” anticipated this fall/winter, not extending the benefit would reduce unemployment benefits during the additional 16 weeks of unemployment under the CARES Act (to the end of the year) to whatever states are willing to pay. In Arizona it is a maximum of $240 per week; most will receive less.

For those who have returned to work, Fewer hours, less pay and more anxiety greet returning workers:

As millions of Americans return to work amid the worst economic crisis in a generation, they’re unexpectedly discovering their old positions are far more burdensome than they used to be. Their hours have been cut, their pay has been slashed and their responsibilities are now magnitudes greater. And their job security — despite President Trump’s recent proclamations about an economy on the mend — remains anything but guaranteed.

For those who did maintain their old jobs, newly unfavorable conditions have left many workers trading one set of anxieties for another, now fearful for their financial and physical safety.
“People are coming back to work in jobs that are very different than they were three months ago,” said Robert Scott, a senior economist at the left-leaning Economic Policy Institute. “They’re very risky and there’s a lot of uncertainty about what’s to come. There’s a rocky road ahead, and a lot of work on the economy left to be done.”

[T]here was a higher-than-expected spike in part-time employment, one of a few indicators that “suggests there has not been a full return to work” for some people. Indeed also found that the highest rate of job growth has occurred within the lowest-wage industries, including some food and beverage stores, raising questions about the extent to which some Americans may be falling behind financially.

For workers in some of those jobs, their headaches actually are just beginning.

Restaurant servers, bartenders and other workers who rely on a steady stream of customers — and often the tips they leave — have been disproportionately affected by a pandemic that is spread by social proximity. So too has the coronavirus decimated the retail sector, as online purchases cut into some major brands’ in-store revenue. Some major employers, including J.Crew and J.C. Penney, have fallen into bankruptcy, and others have slashed their workforce, cut the hours of those they keep on staff or changed their job responsibilities entirely.

[T]he effects of the economic downturn are far more widespread, leaving virtually no industry untouched in the broader U.S. economy. A report prepared by the Federal Reserve System, called the Beige Book, found in its May release that sharp reductions to hours and wages have troubled employees nationwide.

Hospitals have placed doctors and support staff on irregular shifts, seeking to save money at a moment of sky-high expenses, threatening some in the medical industry with gaps in their pay. Gig-economy companies including Uber that once offered the promise of a little extra monthly income no longer seem particularly alluring to some Americans, threatening to expose drivers and other workers to strangers who may be sick. Some Uber drivers still on the ride-hailing app say the demand has declined dramatically.

Often, the companies that have continued to operate have demanded more from their workers — without sizable increases in their take-home wages.

Shuttered businesses, slowdowns in spending and sharp declines in tourism have also cleaved massive holes into local governments’ budgets. Last month alone, governments cut more than half a million jobs from their payrolls, according to the new federal data released Friday. The figure does not include those who have seen their hours and wages dramatically cut, putting their financial futures at risk.

Congress has not yet done enough of the right things to address the economic fallout of the coronavirus pandemic, and Senate Republicans and the president have decided they just don’t care, just as long as their corporate oligarch campaign contributors are satisfied.